In The Peripheral, the new stunner by cyberpunk godfather William Gibson, the reader is treated to a look at the future. It’s inexact, this future. The author, delightfully, gives it no date. Maybe it’s 2080, maybe 3001, but whatever the case, when Gibson talks tomorrow, it pays to pay attention today.

Gibson is one of those few prophets whose vision has an overarching tendency to work like a tractor beam, drawing the wide open possibility field of the now directly towards the deadman’s anchor of a very singular then.

Case in point: It is often pointed out that Gibson is the man who invented cyberspace. Notice I didn’t use the phrase “coined the term.” Because, certainly, in his 1981 drop Neuromancer, Gibson coined the term cyberspace—but he did more than that, which, I guess, is a kind of his sick curse. 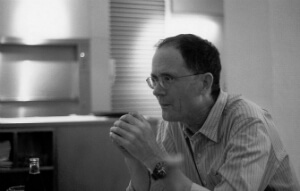 The more that Gibson did amounts to not just coming up with a great twist of words to denote our online future (again, talking cyberspace here), it’s that he understood the soul-deep kinesthetic of cyberspace. He knew, decades before most, how cyberspace would feel. He knew how it would make us feel.

Quite a trick, right?

Gibson was the first to grok the deeply addictive nature of the online world. He understood its lure, its luster, and—better than anyone else—its lonely. Wow, did he ever get the lonely part right.

Let me give you a great example of something I think Gibson noticed long before any of us. Remember when you first got onto Facebook. When, suddenly, for at least the first few weeks, you felt gloriously high. There was a pep in your step. It felt incredibly good to reconnect with folks you hadn’t seen since kindergarten, friends from high school and all the rest.

The high that accompanies the rediscovery of social ties is actually about safety and security. The brain understands that social ties directly correlate to physical security—the more people we know, the greater chance we have of finding a mate, a new job, a better future. This is also one of the reasons we process physical pain in the exact same neuronal regions we process social pain—the systems are strongly coupled.

But that Facebook high soon begins to fade. We start to realize that a “like” means next to nothing. That the safety and security and better possible future we had been feeling was illusionary. The overwhelming majority of people we reconnect with via social networks turn out to be just like us—harried, frenzied, and, mostly, especially when it comes to people who show up in our life via a “friend” tab, unable to help. In other words, we realize we are just as we were. There’s a deep crash afterwards. A sadness. The protective bubble has burst. Alvin Toffler talked about FutureShock, this we might call “FacebookShock.”

And it’s this deeply lonely shock that Gibson anticipated. He knew what was coming for us, he knew what we would regret.

Of course, the list of prophecies that can be attributed to Gibson go on and on. In fact, so good has he been at this game, that Jason Sheehan, in a great review of The Peripheral for NPR, called diving into his latest book “a return visit to the mind that made our now.”

Except, as already mentioned, in his new book, Gibson is once again anticipating the then. Two points are worth making. First, Gibson’s future isn’t pretty. A huge swatch of the population is gone, but not due to any one apocalyptic event. Global warming, pandemics, extinctions, wars, famines, droughts, etc.—in Gibson’s future it’s not any one thing that gets us, it’s every little thing. It’s the aggregate of our selfishness and hubris.

Peripheral’s are meat sacks. They’re biological bodies, rentable by the hour. There’s no “person” inside a peripheral. They’re lifeless when not used. And using one requires little—a neuro-prosthesis not much bigger than a headband—and, of course, the coin to pay for the use.

Well, once again, Gibson has done it again. The Peripheral came out two weeks ago. And, yes, two weeks ago, the idea that you could port consciousness from one body into another, that you could move that other body just like a puppet-master, well that was science fiction, right?

And then it wasn’t. On November 5, in the science journal PLOS ONE, researchers from the University of Washington announced they had established direct brain-to-brain connection between pairs of people. In this particular case, the people were students at UW, positioned in two different buildings on campus, playing a video game—or sort of.

B is hooked up to a transcranial magnetic stimulation coil (positioned in a kind of tricked out swim cap) whose output is focused on the area of the brain that controls hand movements. Both A and B are playing a video game in which they’re protecting a city against pirates by firing a cannon and shooting down rockets, only neither participant can see play the game alone. While A can see the screen and decide when to fire the cannon—that’s all A can do. The touchpad that fires the cannon sits in B’s domain. So A thinks about firing the cannon and that signal is sent over the web where it hits the TMS device and causes B’s hand to fire the cannon. Crazy, right?

And that brings me to my larger point. As whiz-bang as this development sounds, Gibson’s peripheral-laden future, much like our cyberspace now, is also a deeply lonely place. Once again, to borrow Nicholas Carr’s phrase, we’re adrift in the shallows, so unable to make connection that even the connections we make are mitigated by false bodies, by altered kinesthetics, by a nostalgia for a world that no longer exists.

It’s also in The Shallows, that Carr reemphasizes what Thoreau meant when he said: “We do not ride on the railroad, the railroad rides on us.”It’s the undeniable fact that the tools we use also use us. It’s why the medium is the message.

Take the goldfish. Scientists have clocked how long the average goldfish is able to pay attention, how long they can maintain focus on a single data point. It’s 9 seconds, give or take. But here’s the thing, because the Internet has fractured our attention skills, because today, we humans—a species once able to focus long enough to read (gasp) whole books in a sitting—have an average attention span of 8 seconds. That is, we have an average attention span that is less than a goldfish. You betcha, the medium is the message.

So consider where this whiz-bang brain-to-brain communication experiment is leading—to greater disembodiment, to more distance, to a future where once the most intimate and ancient of gestures—say the holding of hands—becomes neither.