Forget Rocket Fuel: This Spaceplane Will Use Microwave Beams to Reach Orbit

Over half a century after the dawn of the space age, getting to space remains an epic challenge. Twice this year, the first stage of a SpaceX Falcon 9 rocket met a fiery end on the Atlantic Ocean—both attempts to recover and reuse rockets to reduce launch costs. A third rocket never made orbit, exploding on ascent.

The first two, planned experiments (not failures), show how hard it is to innovate around titanic launch costs. Meanwhile, Elon Musk called the loss of that third rocket a “huge blow.” It was SpaceX’s first in 19 launches and, more generally, the third failed launch to the space station since last fall and the second straight.

We probably shouldn’t be shocked when a giant column of highly combustible material accelerates to thousands of miles an hour and explodes. Actually, it’s extremely impressive how many make it to orbit. But are chemical rockets the only way to get there?

For the heaviest payloads, the answer is yes, at least for the foreseeable future. However, for smaller cargo, such as materials necessary for critical orbital infrastructure (e.g., telecommunications), other solutions are feasible.

The company is working on an “external propulsion” spaceplane that separates energy from propellant. Instead of volatile liquid or solid rocket fuel, the craft runs on pressurized hydrogen. A ground antenna array aims a beam of microwaves at a heat exchanger in the plane’s belly, superheats the hydrogen to 2,000 degrees kelvin, and forces it out of an exhaust nozzle to provide enough thrust to reach orbit.

Ultimately, they hope to build a reusable single-stage-to-orbit spaceplane that would slash launch costs for small satellite payloads and remove combustion from the equation entirely.

It may sound a little far fetched, but in fact, the idea has a long history, and Escape Dynamics recently announced a key breakthrough. In tests, their lab-scale prototype thruster achieved efficiency higher than anything possible using chemical rockets.

“We as a technological civilization have been flying rockets into space for less than 60 years,” Dmitriy Tseliakhovich, the company’s cofounder and CEO/CTO, told Singularity Hub. That’s a pretty short period from a technological perspective, says Tseliakhovich, and chemical combustion isn’t the end—it’s merely the first step.

An Old Idea Gets a New Lease on Life

The idea of external propulsion is by no means new. It was proposed by Konstantin Tsiolkovsky nearly a century ago, and NASA and Caltech have since toyed with the concept. But it’s only matured recently. Tseliakhovich says technological advances and changes to the market explain why such spacecraft finally look feasible.

Affordable energy storage in battery banks, for example, allow the team to gather and store the needed grid energy pre-launch. Meanwhile, though first developed in the 80s, the ability to rapidly discharge that energy (using a gyrotron) and the ceramics-based materials to build an efficient heat exchanger have only recently come into their own. 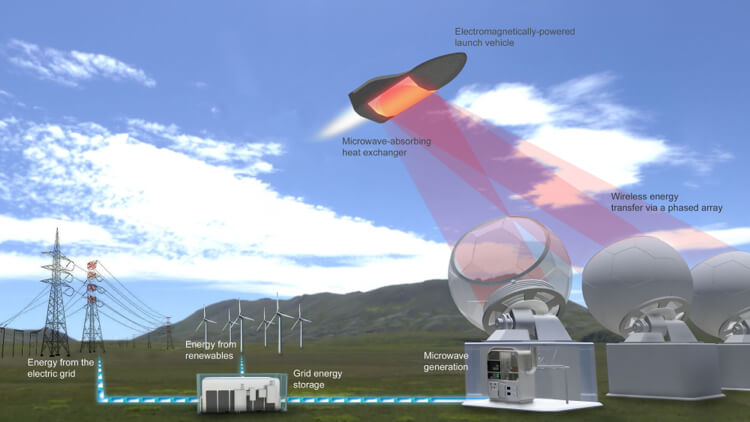 Further, there is growing demand for small payloads. With powerful, miniature sensors and chips, we’re now able to pack quite a bit more tech into much lighter satellites. Startups like Planet Labs (the company assembling a constellation of Earth observing satellites) or Google (building out global internet infrastructure) stand to benefit from the cost savings Escape Dynamics would offer if successful.

The challenge? Showing skeptics the approach is not only practically possible but can significantly boost efficiency over chemical rockets.

In 2010, Tseliakhovich conceived of the company as part of Singularity University’s Graduate Studies Program. (Coincidentally, this was the same program that birthed Made In Space, the startup that recently put a 3D Printer on the ISS.) Shortly after, Escape Dynamics was founded with entrepreneur and aviator Richard F. Shaden and later joined SU Labs. Since then they’ve grown, adding Laetitia Garriott, president and COO, to the founding team.

And now, five years on, they say they’ve taken a big step forward.

Last Friday, Escape Dynamics revealed they’ve successfully demonstrated the whole system—drawing energy from the grid, converting it to a microwave beam, and using it to heat gas (helium in this case) to fire a thruster.

The thruster’s efficiency, measured by specific impulse, exceeded the maximum possible chemical rocket efficiency by 8%, a number they say would have hit 30% using hydrogen instead of helium.

“Our results for the first time showed operation of a microwave-powered thruster with efficiency above the limit of chemical rockets and above the efficiency threshold required for single-stage-to-orbit flight,” Tseliakhovich told us.

(Watch the team’s prototype antenna track and beam energy to a drone in this video.)

If scalable, the benefits of external propulsion would be significant.

Eliminating stage separation, the moment one booster falls off a rocket and the next takes over, simplifies the vehicle and makes it less likely to fail. Eliminating combustion removes the explosive risks of storing oxidizer near fuel. And because a spaceplane glides back to Earth, instead of the hard-to-control freefall of a rocket stage, reusability may prove an easier nut to crack.

Also, of course, it would be a lot more affordable.

According to Will Marshall, CEO of Planet Labs, launch costs are in the ballpark of $25,000 to $50,000 per kilogram. He’s a fan of the alternative approach: “Escape Dynamics is pursuing a radical technology—one I fundamentally think is a good idea—which could massively reduce the costs for small satellite payloads.”

Once they start regularly flying payloads, Tseliakhovich estimates costs could eventually fall by two orders of magnitude—perhaps reaching as low as around $150 per kilogram.

The recent announcement is a validation of the approach, but Escape Dynamics is still in the research phase. They’ll next take the system outdoors, further ramping up beam energy, firing it over longer distances, and testing hydrogen instead of helium.

The big challenge will be scaling everything up into a full-scale prototype, and making it tough enough for reusability over multiple flights.

None of this will be easy, and final success is no sure bet. But if things go (at least mostly) to plan, Tseliakhovich hopes his company will begin flight tests of a small-scale thruster in 2017 and launch their first payload to orbit at the turn of the decade.

The Future: Expanding the Menu of Options

Tseliakhovich believes it will likely work alongside heavy-lifting chemical rockets and is a huge fan of current efforts to improve them by the likes of Elon Musk and SpaceX. (“One of the most remarkable efforts pursued by our civilization today.”)

Generally, he thinks external propulsion can provide a revolutionary new alternative for affordably getting small payloads to orbit and, after it’s been rigorously tested for safety, may even be a less explosive way to carry humans into space.

But first, they’ll need to take it from moonshot to conventional technology—a path well worth traveling according to Tseliakhovich.

“The extraordinary opportunities that this system can open fully justify solving the technical challenges in front of us.”