In Greenlight VR’s last article for Singularity Hub we broke down the virtual reality landscape, including company growth, investment, and geographical trends. In this installment, we’ll look at the consumer market. As big players like Oculus, Sony, and HTC unveil consoles to the masses in 2016, it’s valuable to understand the consumers that will make or break the industry.

Greenlight VR recently conducted a national 2,000-consumer study in the US with Touchstone Research to gauge affinity for VR consoles, shed light on realistic price-point thresholds, and most importantly, assess what VR content consumers want.

What did our first-of-its-kind 2015 consumer report find?

Virtual Reality Has Entered the Mainstream

In just three years, virtual reality has gone from pre-dated technology to household name. What started as a Kickstarter project has turned into a billion-dollar platform for the biggest names in tech. According to the most recent study findings, 80% of consumers are familiar with VR, and its recent developments. For a technology that has yet to release any top-tier products (e.g., Oculus Rift, Playstation VR, HTC Vive), this is highly unprecedented. Still, while many are aware of virtual reality technology, 70% of respondents only know “little” to “some” information about it.

So, while awareness is high for most consumers, many are not at the point where they actively seek out more information. Rather, VR remains a “novelty” concept being driven by national media outlets at high rates. So why is VR so popular?

According to the survey, the mere participation in virtual reality is consistent with viral traits like retention and can lead to increased “word of mouth” activity. In short, seeing is believing; of those that have tried the technology, 79% seek to try it again. Also, of those that try VR, 81% claim they tell their friends about the experience, and the most frequently used word is “cool!”.

This suggests a very bright future for VR because even as many users are only experiencing underdeveloped kits that have yet to do real justice to content—they are sharing/discussing VR at breathtakingly high rates. Marketers and brands that engage first-time VR users with unique content are primed to create buzz-worthy campaigns. 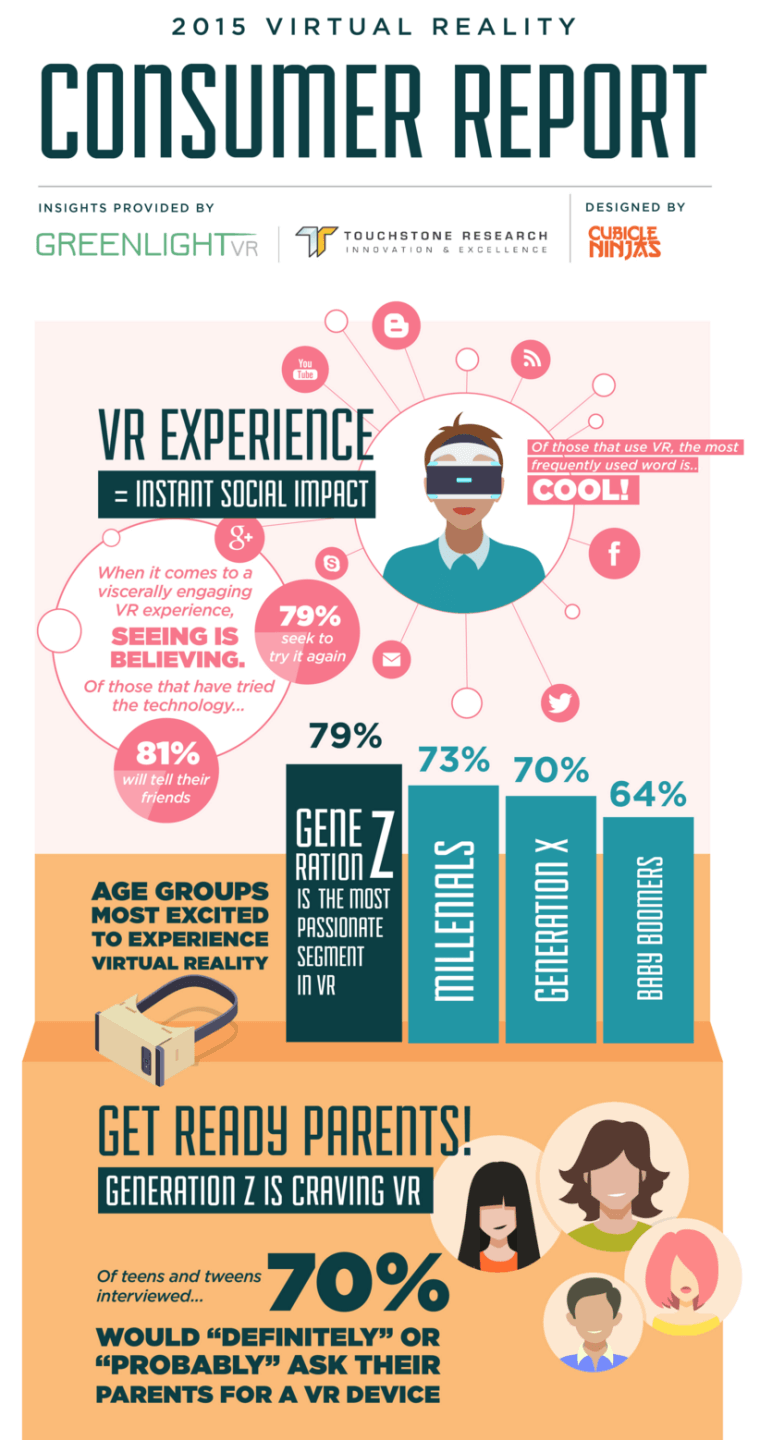 The 3 M’s: Millennials, Males and Minorities Are Most Aware

While it is to be expected that “tech-savvy,” informed segments like millennials (42%) and males (41%) over-index in VR brand recognition, it should be noted that Asians, African Americans and Hispanics are more aware and excited for VR than their Caucasian counterparts. On average, Asians (53%), Hispanics (43%), and African Americans (35%) over-index by 14 percentage points compared to Caucasians (30%) in terms of VR awareness.

There is a large opportunity to cater to these segments more meaningfully, especially minorities, who tend to get overlooked in the clutter of marketing schemes. For VR brands that take time to cater to minority interests, and most importantly, recognize them as a formidable VR consumer, there could be major benefits that translate to a growing, excited fan base. 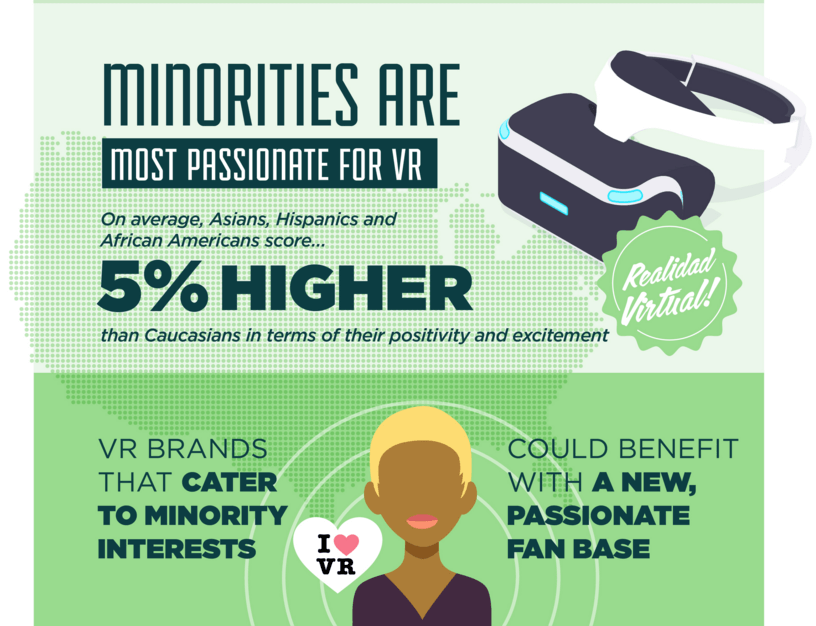 Gen Z Is the Most Passionate Generation for All Things VR

In one of the most remarkable findings of the Consumer Report, Generation Z (0 to 19 years old) is most excited to experience virtual reality, surpassing all other generational segments. An overwhelming majority of Generation Z (79%) feel positively towards VR, beating out millennials (73%), Generation X (70%), and baby boomers (64%). Of the tweens interested in VR, 51% describe “loving it,” while 28% describe “liking it.” Of the teens and tweens interviewed, 70% will “definitely” or “probably” ask their parents for a VR device.

This is a valuable implication for both marketers and developers of content alike. While VR has been geared towards older crowds, the most lucrative long-term play could easily involve positioning VR content, games, and education for children. VR Developers that can successfully tap into children’s imaginations (à la Disney Quest circa 1990s) could reap major benefits. It should be noted that Oculus developer kits don’t currently permit developers to test or build content for children. But as consoles are released, these terms will likely change.

Price Will Be the #1 Factor Driving VR Purchase in 2016

According to the survey, price is the most powerful factor consumers will consider when thinking about buying a VR device. Sixty five percent of consumers will take cost into account when seeking to purchase a headset/device in 2016. Other very important factors include “quality” (57%), “durability” (53%), “content” (49%) and “ease of use” (46%).

Brands that can provide quality VR experiences at a reasonable price point could flourish in 2016. And if mobile headsets like Gear VR can compete with an experience that even remotely resembles the high-powered HMDs like Oculus and Playstation—at nearly half the price, mobile VR headset sales could be poised for a strong year.

Of those interested in VR headsets, 60% will not seek to pay over $400 dollars. Most users will fall into the $200-$400 price range, primed for mobile VR headsets like Gear VR, Zeiss One, and potentially Playstation VR.

It appears affordability and accessibility will be a major hurdle for VR companies in 2016. While most consumers would prefer higher-end HMD models, many will have to settle for low- to mid-range quality HMDs or wait a year or two for prices to drop. 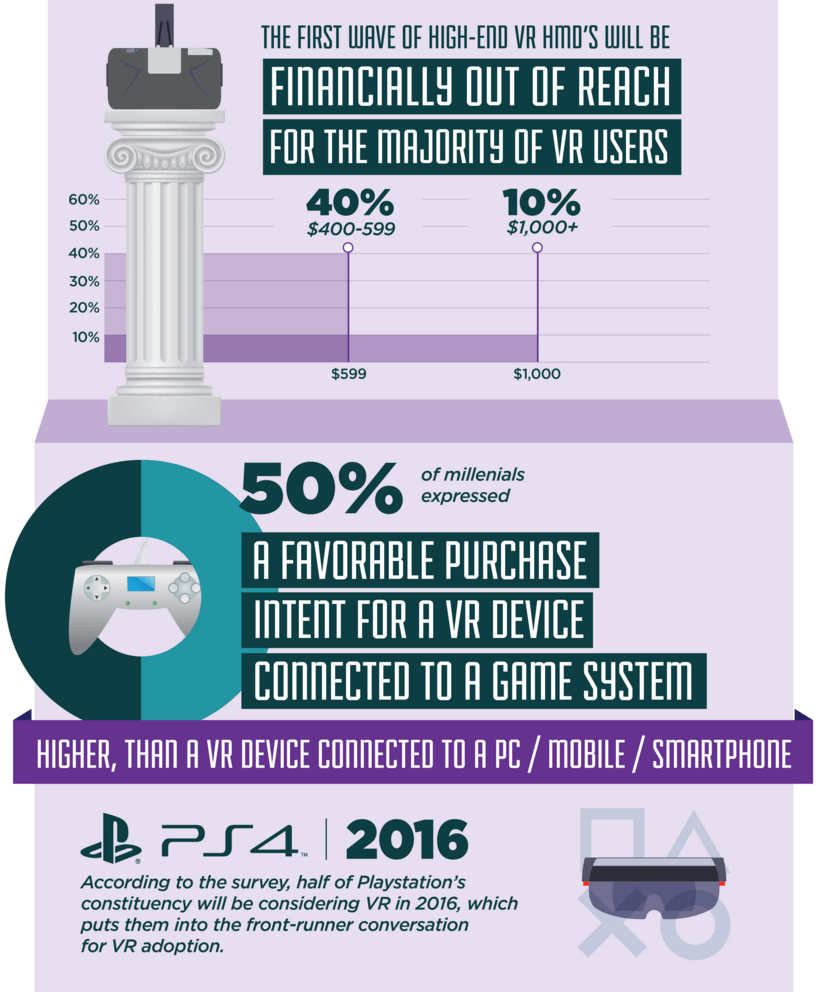 The Average User: A Millennial Purchasing VR for Their Game Console System

According to the research, in 2016 millennials are most likely to consider purchasing a virtual reality headset for their game-console systems in 2016 (50%). These users are willing to pay an average of $54 dollars more than any other segment for a headset.

This bodes extremely well for Sony Playstation, which can seamlessly provide the most immediate VR upgrade for those that already own a PS4 console. And because half of their constituency will be considering VR in 2016, they are the front-runner in the conversation for VR adoption.

Playstation VR will have a major leg up on Oculus in terms of accessibility. Oculus Rift will likely be attainable for just 10% of consumers interested in purchasing a high-performance HMD next year, while the Playstation VR should be within range for 31% of consumers.

A Majority Of VR Enthusiasts Are Still Brand Agnostic

Eighty percent of survey participants don’t have a particular brand of virtual reality in mind. Of the 20% that do have a console preference, these consumers are most interested in Samsung Gear VR (48%) and Playstation VR (48%) followed by Oculus Rift (44%).

While most consider Oculus Rift to be the front-runner for early adopters, brand equity remains an important factor to the general public. Oculus Rift will have to ramp up its marketing efforts and, theoretically, outspend its competitors to assert the same levels of brand awareness and recognition next year.

Based on our findings, a majority of hardcore gamers (those who play at least weekly) across all existing game platforms (mobile, PC, game consoles) are “likely” to “definitely” going to try VR. Three of four hardcore gamers will seek to try VR, with those that already own console systems and computer/PCs being more inclined to try VR than smartphone gamers. Eighty five percent of game enthusiasts are looking forward to game applications in virtual reality.

Game Expectations: VR Should Be a Multiplayer, Social Experience

While many consider virtual reality to be an introverted, closed-off, single-player activity conducted in the privacy of one’s home, the survey results beg to differ. According to the research, 53% of those polled believe VR will be just as good for playing with others as it is for playing alone.

It’s Not Just Gaming: VR TV, Movies, and Video Content Have Even Greater Interest in VR

Consumers are slightly more interested in VR for TV, movies, and video (66%) compared to gaming (60%). Surprisingly, this sentiment is consistent across all generations.

While gamers will be the first to embrace the technology, these results signal a longer-term play for interactive entertainment. The partnership between Netflix and Oculus announced in Q3 of 2015 is setting the tone early. As VR is adopted by broader audiences, expect a shift to support content beyond gaming that meets the needs of the most users, not the most gamers. 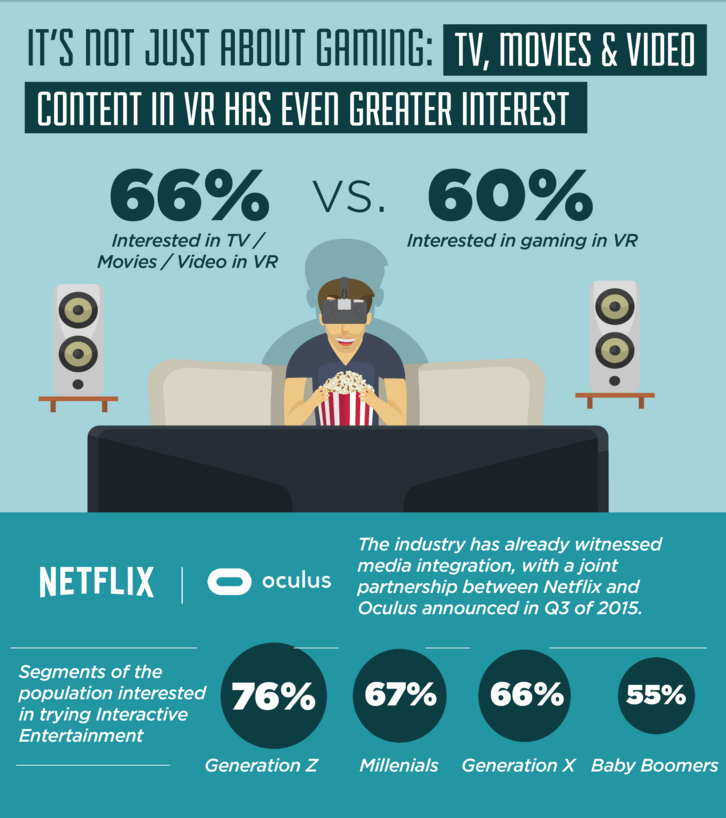 Of those interested in VR entertainment, most respondents are seeking action/adventure (60%) and sci-fi (48%). Brands that strategically align with these categories (e.g., Mountain Dew, Red Bull, Sci-Fi Channel) could benefit experimenting with VR as a fun, new medium.

Slightly over half (52%) of all respondents expressed some concern with virtual reality. The most common concerns raised were “health” (23%) followed by “losing touch with the real world” (11%), VR addiction (5%) and VR being too expensive (5%). Parents notably over-index fear for their children compared to other segments when it comes to VR, with slightly higher fear that children can “lose touch with the real world” (+4%) and be subject to “VR addiction” (+6%) compared to the general population.

With consumer virtual reality looming, concerns about such an unfamiliar product are understandable. Expect companies like Sony, HTC and Oculus to go to great lengths to address health concerns before the products are released to the general public.

This is the first in a series of articles from Greenlight VR examining the state of the expanding virtual reality industry across the globe. Stay tuned for more. 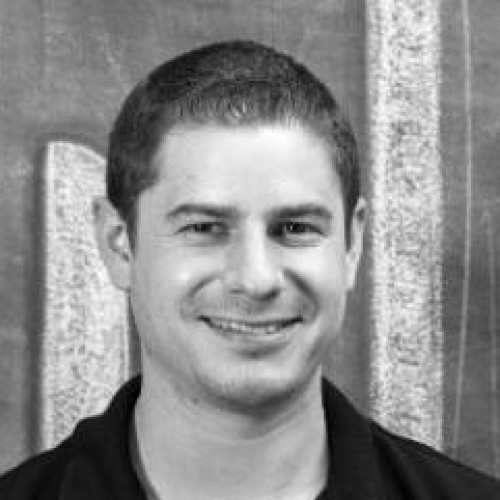 Howie Leibach
Howie is a senior research analyst for Greenlight VR. Greenlight VR is the industry leader in market intelligence for the global virtual reality economy. The company tracks more virtual and augmented reality companies than any other market data company — to date, over 1 million data points on thousands of companies. To learn more, visit www.greenlightvr.com
RELATED