The long vision of nanotechnology suggests tiny robot “assemblers” will swarm unseen in the air, water, and even our bodies, building anything from the atoms up. It’s a wild thought and still (mostly) a dream. But looked at a bit differently, these nanoassemblers are already here, and we call them “life.” Basic organic machinery is ceaselessly pulling in raw materials and building (molecule by molecule) cells, organs, and bodies—from hearts to brains, ants to blue whales.

Of course, we love to draw analogies between our inventions and the natural world. Today, DNA is software and our brains computers. These analogies help us visualize and even develop complex systems, but they’re necessarily imprecise. 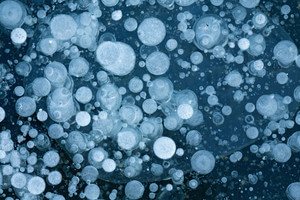 Even so, what life does on the smallest scales and what nanotechnology aims to do aren’t so different. Both assemble and repair microscopic structures by taking in atoms and molecules in one state and transmuting them into a different one. Life does its own thing, tuning and retuning itself to suit the environment over eons. Nanotechnology, on the other hand, would be tailored to our purposes—microscopic machines we’d reprogram at will.

We don’t yet have sleek nanoassemblers, but biology may be a bridge to that future. Research at the convergence of biotechnology and nanotechnology is taking control of life’s “nanoassemblers” and repurposing them. Proteins, for example, orchestrate the complicated molecular dance in living cells—but what if we could contract them to build other things too?

In a recent Dartmouth College study published in Nature Communications, researchers show an artificial protein (COP) can organize 60-atom balls of carbon—known as fullerene or buckyball—into a lattice. The two molecules self-assemble into a stable protein-fullerene structure, in which fullerene’s carbon balls are sandwiched between the proteins.

The results are of particular note because although fullerene is already well-known in nanotechnology for its high heat resistance and doped superconductivity, it isn’t easy to assemble into useful structures. Senior author, Gevorg Grigorian, says the work is a “proof-of-principle” showing synthetic proteins can assemble nanomaterials by design, and he hopes these specific results might yield more generalized methods in the future.

According to Grigorian, the programmable assembly of molecules using synthetic proteins could bring a range of new materials tailored to be stronger, lighter, or chemically reactive and with a wide range of applications in medicine, energy, and electronics.

“Learning to engineer self-assembly would enable the precise organization of molecules by design to create matter with tailored properties,” Grigoryan says.

The study is one example of a larger body of research aiming to take the fundamental building blocks of life and find new, more technologically inclined uses for them.

DNA has been used to make self-assembling structures called DNA origami. By coding and synthetically building just the right sequence of nucleotides, DNA can form nanoscale smiley faces, the alphabet, or tiny clamshells able to carry some useful agent inside and open on cue.

In a talk last year, Autodesk’s Andrew Hessel—a synthetic biologist at the convergence of biotech and nanotech—said nanotechnology is still really hard. Once you reach molecular and atomic scales, the rules change. Everything is jiggling and jostling; precision is a challenge.

Hessel finds the machine/biology analogy useful and sees cells as tiny factories and DNA as computer code—and all of it is already here, now, ready for us to use.

“If you’re really interested in nanotechnology, but want to do it digitally and do it in a way that scales and share the code,” Hessel said, “you really have to think about programming living cells to do the work and using DNA to do it.”

Scientists have long been reprogramming microbes to produce useful byproducts, such as fuels and plastics. Some even convert sewage to electricity. And while cells are a bit upstream of the nanoscale, it shows how we can harness biology to make useful stuff.

All this is part of a shift Harvard’s George Church and Ed Regis described in the 2012 book Regenesis. Synthetic biology and genetic engineering aren’t only about designer babies. The potential is wider. Biology nears the definition of a “universal assembler,” according to Church and Regis, and the question isn’t so much what such systems can do—but what they can’t.

“After all, tiny life forms, driven solely by their own natural DNA, have, just by themselves, produced large, complex objects: elephants, whales, dinosaurs,” they wrote. “A minuscule fertilized whale egg produces an object as big as a house. So maybe one day we can program an organism, or a batch of them, to produce not the whale but the actual house.”

Of course, Church and Regis were careful to note, we’re far short of such a reality. But recent advances show we’re beginning to step in that direction. Whether scientists are using proteins to assemble wild new materials or microbes to make fuels and plastics, we’re in the early stages of an era when synthetic biology helps us build more precisely from the bottom up.