What Happens When Cyborg Tech Goes Beyond Medicine? 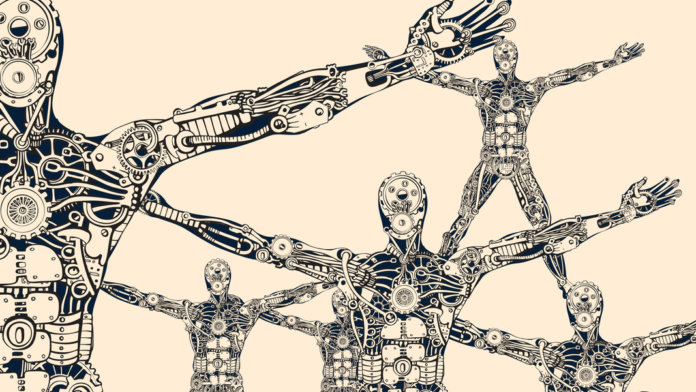 The age of the cyborg may be closer than we think. Rapidly improving medical robotics, wearables, and implants means many humans are already part machine, and this trend is only likely to continue.

It is most noticeable in the field of medical prosthetics where high-performance titanium and carbon fiber replacements for limbs have become commonplace. The use of “blades” by Paralympians has even raised questions over whether they actually offer an advantage over biological limbs.

For decades, myoelectric prosthetics—powered artificial limbs that read electrical signals from the muscles to allow the user to control the device—have provided patients with mechanical replacements for lost hands.

Now, advances in robotics are resulting in prosthetic hands that are getting close to matching the originals in terms of dexterity. The Michelangelo prosthetic hand is fully articulated and precise enough to carry out tasks like cooking and ironing.

Researchers have even demonstrated robotic hands that have a sense of touch and can be controlled using the mind. And just last month another group showed that fitting a standard myoelectric arm with a camera and a computer vision system allowed it to “see” and grab objects without the user having to move a muscle.

Medical exoskeletons are already commercially available—most notably, ReWalk and Ekso Bionics devices designed to help those with spinal cord injuries stand and walk. Elsewhere, this technology is being used to rehabilitate people after strokes or other traumatic injuries by guiding their limbs through their full range of motion.

At present, these technologies are aimed solely at those who have been injured or incapacitated, but an editorial in Science Robotics last week warned that may not always be the case.

“There needs to be a debate on the future evolution of technologies as the pace of robotics and AI is accelerating,” the authors wrote.

“It seems certain that future assistive technologies will not only compensate for human disability but also drive human capacities beyond our innate physiological levels. The associated transformative influence will bring on broad social, political, and economic issues.”

This can already be seen with the development of military exoskeletons designed to boost soldiers’ endurance. More bizarrely, Japanese researchers have recently floated the idea of adding to our limbs rather than replacing them. The MetaLimbs project gives users two extra robotic arms that can be controlled using sensors on their legs and feet.

Last week’s issue of Science Robotics actually included a study demonstrating that a soft robotic exosuit was actually more effective at lightening the load on a runner when it didn’t follow a human’s natural running pattern and instead used computer simulations to decide what forces to apply.

This suggests there is considerable room for machines to not only augment the power of our muscles but even optimize the biomechanics of our movement. And as the authors of the editorial note, biomechanics is only one strand of research where scientists are trying to replicate and ultimately improve our abilities.

Devices like cochlear implants have been used to restore hearing in the deaf for decades and there are a number of experimental efforts to create bionic eyes to help the blind see again. Efforts to augment our intelligence with neural implants have been widely reported on in recent months.

Admittedly, there is still a long way to go before people start demanding to amputate their arm so they can get a shiny, new robotic one. And it’s likely the companies driving for consumer-grade neural interfaces are overestimating how many people will voluntarily undergo brain surgery.

But we’ve already taken the first steps towards merging our biological selves with machines.

You can argue smartphones are already essentially a prosthetic designed to boost communication and memory. And more overtly cyborg-like augmentations are likely to appear in many of our lifetimes.

What then does that mean for humankind? Natural evolution has long relied on mutation conferring minute but significant advantages to individuals that gradually spread throughout populations. If new prosthetic technologies start to confer these advantages overnight the effects could be very patchy.

The worry is that the latest augmentations are only available to the few who can afford them and in just a few generations you could end up with an elite who not only dwarf the rest of humanity financially but also physically and cognitively.

At the same time, these technologies hold huge promise to restore a decent standard of living to the countless people incapacitated by injury or disease. And if applied equitably, devices aimed at augmenting our abilities could better equip us to face the many challenges society faces.

But as the authors of the editorial note, the conversation on how best to guide us through this next stage of our evolution needs to start now. Because these devices have so far been focused on restoring functions that have been lost, we have largely missed the fact that they are now reaching the point where they can improve those functions or even enable new ones.