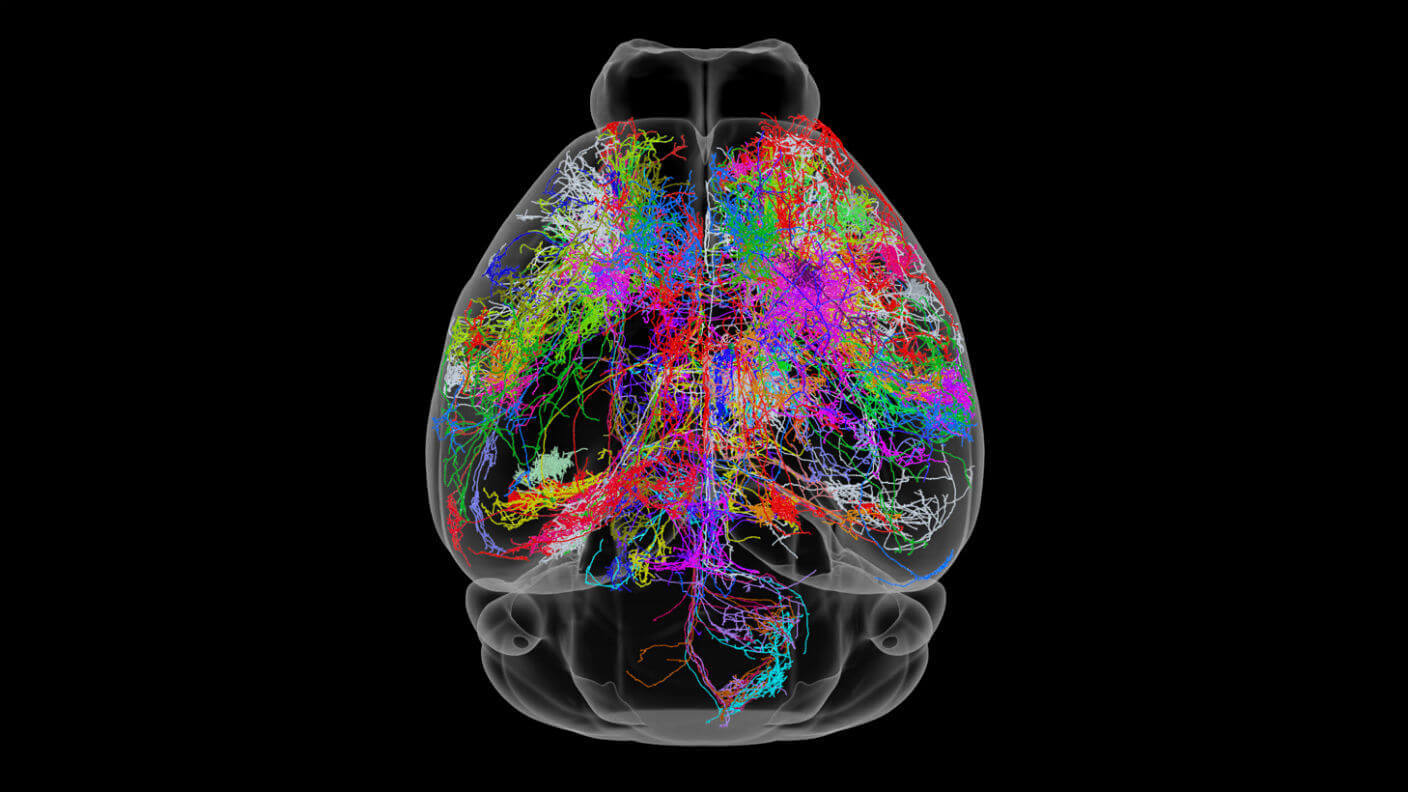 Ask any neuroscientist to draw you a neuron, and it’ll probably look something like a star with two tails: one stubby with extensive tree-like branches, the other willowy, lengthy and dotted with spindly spikes.

While a decent abstraction, this cartoonish image hides the uncomfortable truth that scientists still don’t know much about what many neurons actually look like, not to mention the extent of their connections.

But without untangling the jumbled mess of neural wires that zigzag across the brain, scientists are stumped in trying to answer one of the most fundamental mysteries of the brain: how individual neuronal threads carry and assemble information, which forms the basis of our thoughts, memories, consciousness, and self.

What if there was a way to virtually trace and explore the brain’s serpentine fibers, mucih like the way Google Maps allows us to navigate the concrete tangles of our cities’ highways?

Thanks to an interdisciplinary team at Janelia Research Campus, we’re on our way. Meet MouseLight, the most extensive map of the mouse brain ever attempted. The ongoing project has an ambitious goal: reconstructing thousands—if not more—of the mouse’s 70 million neurons into a 3D map. (You can play with it here!)

With map in hand, neuroscientists around the world can begin to answer how neural circuits are organized in the brain, and how information flows from one neuron to another across brain regions and hemispheres.

The first release, presented Monday at the Society for Neuroscience Annual Conference in Washington, DC, contains information about the shape and sizes of 300 neurons.

“MouseLight’s new dataset is the largest of its kind,” says Dr. Wyatt Korff, director of project teams. “It’s going to change the textbook view of neurons.”

The Mouse Brain Connectivity Atlas at the Allen Institute for Brain Science in Seattle tracks neuron activity across small circuits in an effort to trace a mouse’s connectome—a complete atlas of how the firing of one neuron links to the next.

What makes MouseLight stand out is its scope and level of detail.

MICrONS, for example, is focused on dissecting a cubic millimeter of the mouse visual processing center. In contrast, MouseLight involves tracing individual neurons across the entire brain.

And while connectomics outlines the major connections between brain regions, the birds-eye view entirely misses the intricacies of each individual neuron. This is where MouseLight steps in.

With a width only a fraction of a human hair, neuron projections are hard to capture in their native state. Tug or squeeze the brain too hard, and the long, delicate branches distort or even shred into bits.

In fact, previous attempts at trying to reconstruct neurons at this level of detail topped out at just a dozen, stymied by technological hiccups and sky-high costs.

A few years ago, the MouseLight team set out to automate the entire process, with a few time-saving tweaks. Here’s how it works.

After injecting a mouse with a virus that causes a handful of neurons to produce a green-glowing protein, the team treated the brain with a sugar alcohol solution. This step “clears” the brain, transforming the beige-colored organ to translucent, making it easier for light to penetrate and boosting the signal-to-background noise ratio. The brain is then glued onto a small pedestal and ready for imaging.

Building upon an established method called “two-photon microscopy,” the team then tweaked several parameters to reduce imaging time from days (or weeks) down to a fraction of that. Endearingly known as “2P” by the experts, this type of laser microscope zaps the tissue with just enough photos to light up a single plane without damaging the tissue—sharper plane, better focus, crisper image.

After taking an image, the setup activates its vibrating razor and shaves off the imaged section of the brain—a waspy slice about 200 micrometers thick. The process is repeated until the whole brain is imaged.

This setup increased imaging speed by 16 to 48 times faster than conventional microscopy, writes team leader Dr. Jayaram Chandrashekar, who published a version of the method early last year in eLife.

The resulting images strikingly highlight every crook and cranny of a neuronal branch, popping out against a pitch-black background. But pretty pictures come at a hefty data cost: each image takes up a whopping 20 terabytes of data—roughly the storage space of 4,000 DVDs, or 10,000 hours of movies.

Stitching individual images back into 3D is an image-processing nightmare. The MouseLight team used a combination of computational power and human prowess to complete this final step.

The reconstructed images are handed off to a mighty team of seven trained neuron trackers. With the help of tracing algorithms developed in-house and a keen eye, each member can track roughly a neuron a day—significantly less time than the week or so previously needed.

Even with just 300 fully reconstructed neurons, MouseLight has already revealed new secrets of the brain.

While it’s widely accepted that axons, the neurons’ outgoing projection, can span the entire length of the brain, these extra-long connections were considered relatively rare. (In fact, one previously discovered “giant neuron” was thought to link to consciousness because of its expansive connections).

MouseLight blows that theory out of the water.

The data clearly shows that “giant neurons” are far more common than previously thought. For example, four neurons normally associated with taste had wiry branches that stretched all the way into brain areas that control movement and process touch.

“We knew that different regions of the brain talked to each other, but seeing it in 3D is different,” says Dr. Eve Marder at Brandeis University.

“The results are so stunning because they give you a really clear view of how the whole brain is connected.”

With a tested and true system in place, the team is now aiming to add 700 neurons to their collection within a year.

But appearance is only part of the story.

We can’t tell everything about a person simply by how they look. Neurons are the same: scientists can only infer so much about a neuron’s function by looking at their shape and positions. The team also hopes to profile the gene expression patterns of each neuron, which could provide more hints to their roles in the brain.

MouseLight essentially dissects the neural infrastructure that allows information traffic to flow through the brain. These anatomical highways are just the foundation. Just like Google Maps, roads form only the critical first layer of the map. Street view, traffic information and other add-ons come later for a complete look at cities in flux.

The same will happen for understanding our ever-changing brain.