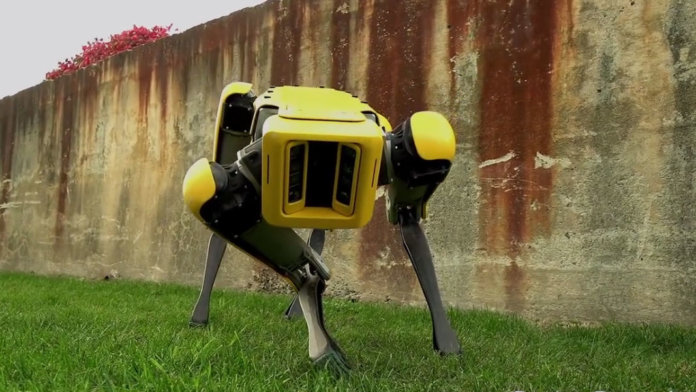 Millions of years of evolution have allowed animals to develop some elegant and highly efficient solutions to problems like locomotion, flight, and dexterity. As Boston Dynamics unveils its latest mechanical animals, here’s a rundown of nine recent robots that borrow from nature and why.

Starting with BigDog in 2005, the US company has built a whole stable of four-legged robots in recent years. Their first product was designed to be a robotic packhorse for soldiers that borrowed the quadrupedal locomotion of animals to travel over terrain too rough for conventional vehicles.

The US Army ultimately rejected the robot for being too noisy, according to the Guardian, but since then the company has scaled down its design, first to the Spot, then a first edition of the SpotMini that came out last year.

The latter came with a robotic arm where its head should be and was touted as a domestic helper, but a sleeker second edition without the arm was released earlier this month. There’s little detail on what the new robot is designed for, but the more polished design suggests a more consumer-focused purpose.

Festo has released a long line of animal-inspired machines over the years, from a mechanical kangaroo to robotic butterflies. Its latest creation isn’t a full animal—instead it’s a gripper based on an octopus tentacle that can be attached to the end of a robotic arm.

The pneumatically-powered device is made of soft silicone and features two rows of suction cups on its inner edge. By applying compressed air the tentacle can wrap around a wide variety of differently shaped objects, just like its natural counterpart, and a vacuum can be applied to the larger suction cups to grip the object securely. Because it’s soft, it holds promise for robots required to operate safely in collaboration with humans.

Cockroaches are renowned for their hardiness and ability to disappear down cracks that seem far too small for them. Researchers at UC Berkeley decided these capabilities could be useful for search and rescue missions and so set about experimenting on the insects to find out their secrets.

They found the bugs can squeeze into gaps a fifth of their normal standing height by splaying their legs out to the side without significantly slowing themselves down. So they built a palm-sized robot with a jointed plastic shell that could do the same to squeeze into crevices half its normal height.

Search and rescue missions are a common theme for animal-inspired robots, but the snake robot built by CMU researchers is one of the first to be tested in a real disaster.

A team of roboticists from the university helped Mexican Red Cross workers search collapsed buildings for survivors after the 7.1-magnitude earthquake that struck Mexico City in September. The snake design provides a small diameter and the ability to move in almost any direction, which makes the robot ideal for accessing tight spaces, though the team was unable to locate any survivors.

The snake currently features a camera on the front, but researchers told IEEE Spectrum that the experience helped them realize they should also add a microphone to listen for people trapped under the rubble.

Taking more than just inspiration from the animal kingdom, a group from Harvard built a robotic stingray out of silicone and rat heart muscle cells.

The robot uses the same synchronized undulations along the edge of its fins to propel itself as a ray does. But while a ray has two sets of muscles to pull the fins up and down, the new device has only one that pulls them down, with a springy gold skeleton that pulls them back up again. The cells are also genetically modified to be activated by flashes of light.

The project’s leader eventually hopes to engineer a human heart, and both his stingray and an earlier jellyfish bio-robot are primarily aimed at better understanding how that organ works.

Most recent advances in drone technology have come from quadcopters, but Caltech engineers think rigid devices with rapidly spinning propellers are probably not ideal for use in close quarters with humans.

That’s why they turned to soft-winged bats for inspiration. That’s no easy feat, though, considering bats use more than 40 joints with each flap of their wings, so the team had to optimize down to nine joints to avoid it becoming too bulky. The simplified bat can’t ascend yet, but its onboard computer and sensors let it autonomously carry out glides, turns, and dives.

While even the most advanced robots tend to plod around, tree-dwelling animals have the ability to spring from branch to branch to clear obstacles and climb quickly. This could prove invaluable for search and rescue robots by allowing them to quickly traverse disordered rubble.

UC Berkeley engineers turned to the Senegal bush baby for inspiration after determining it scored highest in “vertical jumping agility”—a combination of how high and how frequently an animal can jump. They recreated its ability to get into a super-low crouch that stores energy in its tendons to create a robot that could carry out parkour-style double jumps off walls to quickly gain height.

Normally robots are masters of air, land, or sea, but the robotic salamander built by researchers at EPFL can both walk and swim.

Its designers used X-ray videos to carefully study how the amphibians move before using this to build a true-to-life robotic version using 3D printed bones, motorized joints, and a synthetic nervous system made up of electronic circuitry.

The robot’s low center of mass and segmented legs make it great at navigating rough terrain without losing balance, and the ability to swim gives added versatility. They also hope it will help paleontologists gain a better understanding of the movements of the first tetrapods to transition from water to land, which salamanders are the best living analog of.

A snakelike body isn’t only useful on land—eels are living proof it’s an efficient way to travel underwater, too. Norwegian robotics company Eelume has borrowed these principles to build a robot capable of sub-sea inspection, maintenance, and repair.

The modular design allows operators to put together their own favored configuration of joints and payloads such as sensors and tools. And while an early version of the robot used the same method of locomotion as an eel, the latest version undergoing sea trials has added a variety of thrusters for greater speeds and more maneuverability.