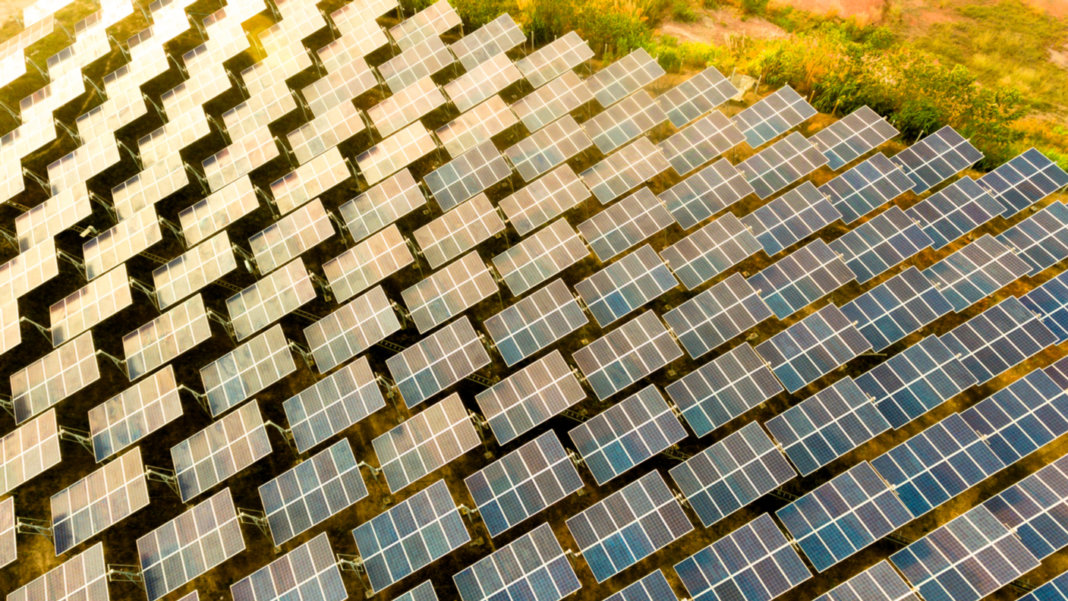 Right now it only exists on paper, in the form of a memorandum of understanding. But if constructed, the newly-announced solar photovoltaic project in Saudi Arabia would break an astonishing array of records. It’s larger than any solar project currently planned by a factor of 100. When completed, nominally in 2030, it would have a capacity of an astonishing 200 gigawatts (GW). The project is backed by Softbank Group and Saudi Arabia’s new crown prince, Mohammed Bin Salman, and was announced in New York on March 27.

The Tengger Desert Solar Park in China, affectionately known as the “Great Wall of Solar,” is the world’s largest operating solar farm, with a capacity of 1.5 GW. Larger farms are under construction, including the Westlands Solar Park, which plans to finish with 2.7 GW of capacity. But even those that are only in the planning phases are dwarfed by the Saudi project; two early-stage solar parks will have capacity of 7.2 GW, and the plan involves them generating electricity as early as next year.

It makes more sense to compare to slightly larger projects, like nations, or even planets. Saudi Arabia’s current electricity generation capacity is 77 GW. This project would almost triple it. The current total solar photovoltaic generation capacity installed worldwide is 303 GW. In other words, this single solar farm would account for a similar installed capacity as the entire world’s capacity in 2015, and over a thousand times more than we had in 2000.

That’s exponential growth for you, folks.

Of course, practically doubling the world’s solar capacity doesn’t come cheap; the nominal estimate for the budget is around $200 billion (compared to $20 billion for around half a gigawatt of fusion, though, it may not seem so bad.) But the project would help solve a number of pressing problems for Saudi Arabia.

For a start, solar power works well in the desert. The irradiance is high, you have plenty of empty space, and peak demand is driven by air conditioning in the cities and so corresponds with peak supply. Even if oil companies might seem blasé about the global supply of oil running out, individual countries are aware that their own reserves won’t last forever, and they don’t want to miss the energy transition. The country’s Vision 2030 project aims to diversify its heavily oil-dependent economy by that year. If they can construct solar farms on this scale, alongside the $80 billion the government plans to spend on a fleet of nuclear reactors, it seems logical to export that power to other countries in the region, especially given the amount of energy storage that would be required otherwise.

We’ve already discussed a large-scale project to build solar panels in the desert then export the electricity: the DESERTEC initiative in the Sahara. Although DESERTEC planned a range of different demonstration plants on scales of around 500 MW, its ultimate ambition was to “provide 20 percent of Europe’s electricity by 2050.” It seems that this project is similar in scale to what they were planning. Weaning ourselves off fossil fuels is going to be incredibly difficult. Only large-scale nuclear, wind, or solar can really supply the world’s energy needs if consumption is anything like what it is today; in all likelihood, we’ll need a combination of all three.

To make a sizeable contribution to that effort, the renewable projects have to be truly epic in scale. The planned 2 GW solar park at Bulli Creek in Australia would cover 5 square kilometers, so it’s not unreasonable to suggest that, across many farms, this project could cover around 500 square kilometers—around the size of Chicago.

It will come as no surprise that Softbank is involved in this project. The founder, Masayoshi Son, is well-known for large-scale “visionary” investments. This is suggested by the name of his $100 billion VC fund, the Softbank Vision Fund, and the focus of its investments. It has invested millions of dollars in tech companies like Uber, IoT, NVIDIA and ARM, and startups across fields like VR, agritech, and AI.

Of course, Softbank is also the company that bought infamous robot-makers Boston Dynamics from Google when their not-at-all-sinister “Project Replicant” was sidelined. Softbank is famous in Japan in part due to their mascot, Pepper, which is probably the most widespread humanoid robot on the planet. Suffice it to say that Softbank is keen to be a part of any technological development, and they’re not afraid of projects that are truly vast in scope.

Since the Fukushima disaster in 2011 led Japan to turn away from nuclear power, Son has also been focused on green electricity, floating the idea of an Asia Super Grid. Similar to DESERTEC, it aims to get around the main issues with renewable energy (the land use and the intermittency of supply) with a vast super-grid that would connect Mongolia, India, Japan, China, Russia, and South Korea with high-voltage DC power cables. “Since this is such a grandiose project, many people told me it is crazy,” Son said. “They said it is impossible both economically and politically.” The first stage of the project, a demonstration wind farm of 50 megawatts in Mongolia, began operating in October of last year.

Given that Saudi Arabia put up $45 billion of the Vision Fund, it’s also not surprising to see the location of the project; Softbank reportedly had plans to invest $25 billion of the Vision Fund in Saudi Arabia, and $1 billion will be spent on the first solar farms there. Prince Mohammed Bin Salman, 32, who recently consolidated power, is looking to be seen on the global stage as a modernizer. He was effusive about the project. “It’s a huge step in human history,” he said. “It’s bold, risky, and we hope we succeed doing that.”

It is the risk that will keep renewable energy enthusiasts concerned.

Every visionary plan contains the potential for immense disappointment. As yet, the Asian Super Grid and the Saudi power plan are more or less at the conceptual stage. The fact that a memorandum of understanding exists between the Saudi government and Softbank is no guarantee that it will ever be built. Some analysts in the industry are a little skeptical.

“It’s an unprecedented construction effort; it’s an unprecedented financing effort,” said Benjamin Attia, a global solar analyst for Green Tech Media Research. “But there are so many questions, so few details, and a lot of headwinds, like grid instability, the availability of commercial debt, construction, and logistics challenges.”

We have already seen with the DESERTEC initiative that these vast-scale renewable energy projects can fail, despite immense enthusiasm. They are not easy to accomplish. But in a world without fossil fuels, they will be required. This project could be a flagship example for how to run a country on renewable energy—or another example of grand designs and good intentions. We’ll have to wait to find out which.