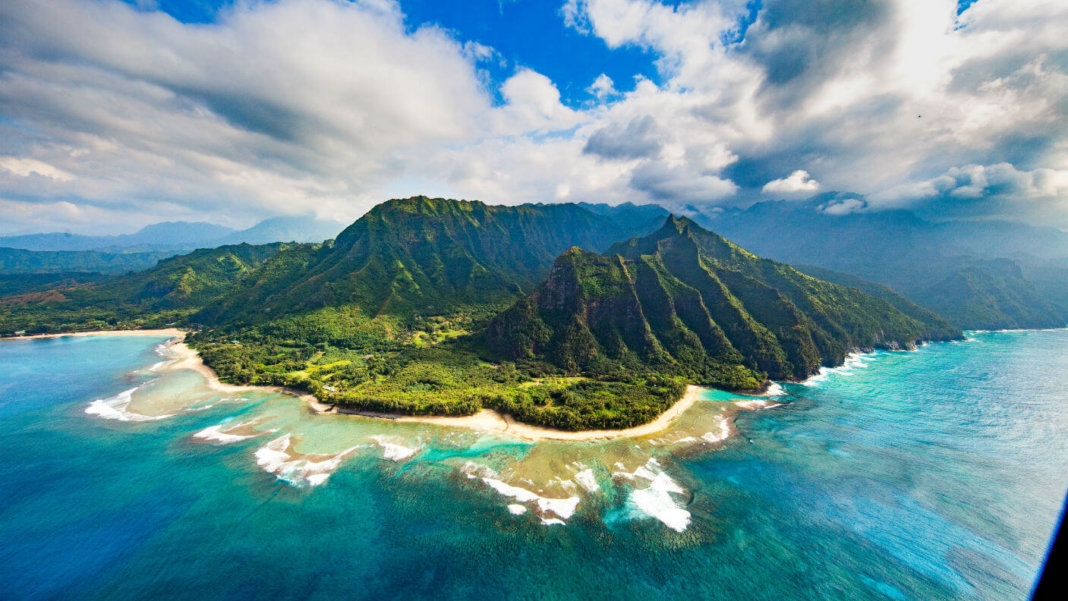 If you’ve done any research into climate change, you’re almost certainly familiar with the Keeling Curve. This sawtoothed upward curve tracks the inexorable increase in carbon dioxide in Earth’s atmosphere, and the rate of increase is proportional to the amount of fossil fuels burned that year (around half of what we emit is absorbed by the oceans, making them more acidic, or by plants in land sinks).

Since the measurements began at Mauna Loa Observatory in 1958, the Keeling Curve has tracked how far carbon emissions have taken us away from the pre-industrial atmosphere our species is used to and towards the atmosphere of the Anthropocene.

Now, Hawaii—home of Mauna Loa—has passed a new law to try to stop its emissions from climbing, aiming to make the state carbon neutral by 2045.

Scientists and policymakers continue to learn more about the effects of climate change, and discuss how best to tackle the problem—adaptation, mitigation, or even geoengineering. But everyone agrees that carbon emissions need to fall dramatically. The Paris Agreement, signed by nearly every nation on the planet, states that by the second half of this century there needs to be a “balance between anthropogenic sources and removal by sinks of greenhouse gases.” In other words, the world needs to go carbon neutral.

Hawaii’s law joins others: the Maldives aim to become carbon neutral by 2020, Costa Rica by 2021, Norway by 2030, Iceland by 2040, Sweden by 2045, and New Zealand by 2050. In the case of the Maldives and Hawaii, you can see the motivation; sea level rise threatens the Maldives so badly that they are building artificial islands to house the population. Hawaii’s legislation cites a recent report that suggests $19 billion in damages due to sea level rise if nothing is done to cut emissions globally. Other countries, like the UK, have laws that promise to reduce net carbon emissions by 80 percent by 2050.

These goals may seem ambitious in the few short decades at our disposal. In the UK, half of electricity is still generated by burning fossil fuels; in the US, 63 percent is—and electricity production is just one sector. Yet, when the targets for 1.5 or 2 degrees Celsius of warming require carbon neutrality for everyone by 2100, ambitious action like this is needed by leading, wealthy nations. There’s already concern that, globally, the pledges are far from sufficient: even if everyone fulfills their current promises, the world is still well on track for three to four degrees of warming by the end of the century.

The concern is that many of the plans are lacking on detail. It’s all very well making a promise to be fulfilled by 2050 or by 2100 when, as a politician, you know you won’t be around to foot the bill if it’s not fulfilled.

Hawaii, for example, already has legislation in place that pledges 100 percent renewable electricity by 2045 (as an added bonus, the Aloha State won’t need to rely on expensive oil imports—its electricity is already the most expensive of any state and most of that generation is from oil). The renewable share for electricity is already 25 percent, the best out of all US states, but as you add more renewables to the grid, it becomes more difficult to increase that share. Solar generation will always be less during the winter and at night, and wind generation is also intermittent. Converting the last quarter of Hawaii’s electricity to renewables will be a much greater challenge.

Hawaii is already attempting to address this with battery parks. In March last year, a 52 megawatt-hour (MWh) battery system started operations, and a 100 MWh battery farm started construction this year.

How much storage would Hawaii need under 100 percent renewables? This is less clear—academic studies suggest for the US as a whole, the range could be from 8 to 16 weeks of electricity consumption. Hawaii used 734,000 MWh of electricity in 2016, so this would correspond to 113,000 to 226,000 MWh. In other words, another thousand of those battery farms, which already rank among the biggest in the world. Of course, energy markets change, technologies improve, and smart grids might reduce the storage requirements.

But decarbonization is about so much more than electricity generation; in the US, this sector accounts for only a third of carbon emissions. Many analysts consider that, given the slow adoption and environmental problems associated with many biofuels, such as the US’s hardly-green corn bioethanol, transportation and industry will have to be electrified. Domestic heating needs to be electrified. Industrial processes like producing textiles and cement—which accounts for five percent of global emissions on its own—need to be done in a carbon neutral way.

And while electric cars can be far more efficient than their fossil-fuel-burning counterparts (and could even help solve the energy storage problem if deployed wisely) all this means ever-more electricity consumption and a need for greater capacity. A carbon-neutral Hawaii will need more electricity still than it does today.

In fact, of the vast array of technologies that might be needed to go carbon neutral, the impressive progress in solar panels and renewable energy in general in recent years is an outlier. Aviation and shipping are industries that have especially lagged behind. Electric cars are already on the roads. Electric planes are still prototypes. For Hawaii, a state where 51 percent of energy consumption is due to transportation and most of that is down to jet fuel, this is a serious problem if you want to go carbon neutral.

As an island state, Hawaii depends on aviation and shipping: 90 percent of the state’s food is imported, so growing and eating locally are also green targets. In fact, if you express it in terms of primary energy rather than electricity, that 25 percent turns into 10 percent from renewable sources (including biomass, 2015, EIA). Even optimists expect that electric planes will just be heading into the mainstream in 20 to 30 years—around the time Hawaii is supposed to be completely carbon neutral.

While Hawaii’s mayors recently committed to phasing out carbon emissions in ground transportation by 2045, the plan is scant on details. This will presumably mean a ban on new sales of fossil fuel cars, something it’s unclear Hawaii mayors can enact. Several countries have announced similar measures, but none have been legislated yet. Given that the average American holds onto a car for 6.5 years, without having to buy back or exchange cars, that ban would have to arrive in the 2030s, but there is no sign of it as yet.

Evidently, achieving decarbonization on this scale will be immensely challenging, even for a relatively wealthy state like Hawaii. In perhaps a subtle acknowledgement of this, an accompanying bill mentions initiatives to create a carbon offset program, and discusses afforestation and soil management as techniques that might help draw down carbon dioxide from the atmosphere. Yet if Hawaii achieves “carbon neutral” status by trading emissions with other parties, it won’t set a roadmap that the rest of the world can hope to follow. And while soil carbon sequestration and afforestation can help reduce carbon emissions, they are not magic bullets, and a full accounting would need to be done.

Negative emissions technologies might ultimately be preferable to or cheaper than eliminating the last few vestiges of carbon dioxide from industry, but substantial investment would be required. Hawaii has no carbon capture and storage facilities, and globally, progress here has stalled.

The recent bill gives the newly formed Greenhouse Gas Sequestration Task Force a deadline of 2023 to craft a plan Hawaii can use to become carbon neutral. As with the other countries that have made these bold and necessary pledges, the world will watch to see what they come up with.

“We’re small,” Scott Glenn, head of the state’s Environmental Quality Office, said to Fast Company. “We’re a rounding error to the emissions that California has. But [others] say, if Hawaii can do it, we can do it. If an island in the middle of the Pacific can make this happen, then we can make it happen. That’s what we try to do. That’s the role we see ourselves having within our national dialogue.”

For those that want to make this dream a reality, the hard work starts here.