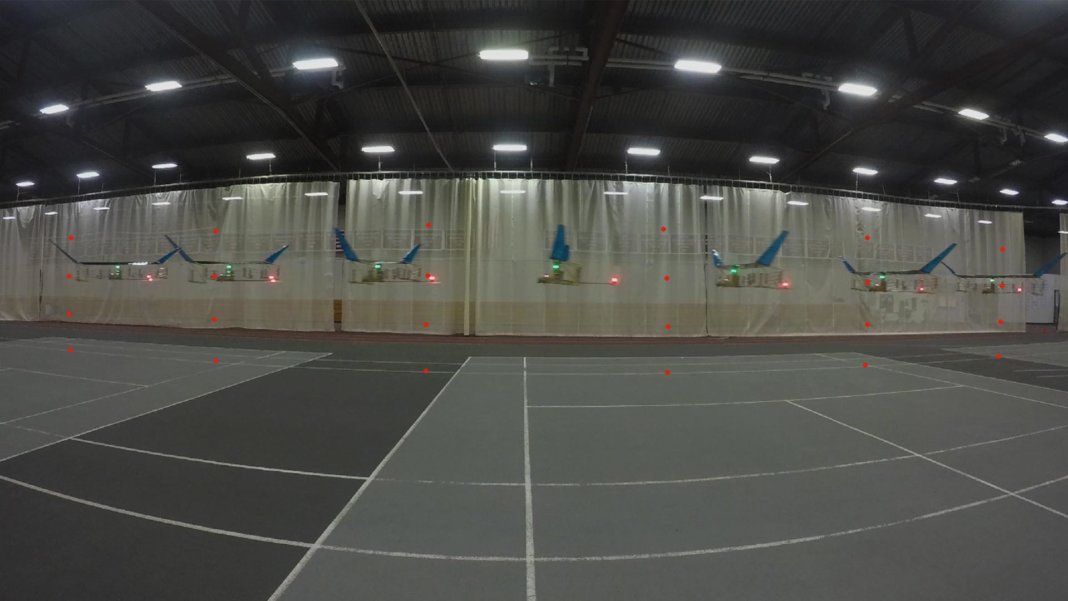 Since their invention more than 100 years ago, airplanes have been moved through the air by the spinning surfaces of propellers or turbines. But watching science fiction movies like the Star Wars, Star Trek, and Back to the Future series, I imagined that the propulsion systems of the future would be silent and still—maybe with some kind of blue glow and “whoosh” noise, but no moving parts, and no stream of pollution pouring out the back.

That doesn’t exist yet, but there is at least one physical principle that could be promising. About nine years ago, I started investigating using ionic winds—flows of charged particles through the air—as a means of powering flight. Building on decades of research and experimentation by academics and hobbyists, professionals and high school science students, my research group recently flew a nearly silent airplane without any moving parts.

The plane weighed about five pounds (2.45 kilograms) and had a wingspan of 15 feet (5 meters), and traveled about 180 feet (60 meters), so it’s a long way from efficiently carrying cargo or people long distances. But we have proved that it is possible to fly a heavier-than-air vehicle using ionic winds. It even has a glow you can see in the dark.

The process our plane uses, formally called electroaerodynamic propulsion, was investigated as far back as the 1920s by an eccentric scientist who thought he had discovered anti-gravity—which was, of course, not the case. In the 1960s, aerospace engineers explored using it to power flight, but they concluded that wouldn’t be possible with the understanding of ionic winds and the technology available at the time.

More recently, however, a huge number of hobbyists—and high school students doing science fair projects—have built small electroaerodynamic propulsion devices that suggested it could work after all. Their work was pivotal to the early days of my group’s work. We sought to improve on their work, most notably by conducting a large series of experiments to learn how to optimize the design of electroaerodynamic thrusters.

A homemade lifter using the same principle as the new MIT airplane.

Moving the Air, Not the Plane Parts

We use a thin filament or wire that is charged to +20,000 volts using a lightweight power converter, which in turn gets its power from a lithium-polymer battery. The thin filaments are called emitters, and are nearer the front of the plane. Around these emitters the electric field is so strong that the air gets ionized—neutral nitrogen molecules lose an electron and become positively charged nitrogen ions.

Farther back on the plane we place an airfoil—like a small wing—whose leading edge is electrically conductive and charged to -20,000 volts by the same power converter. This is called the collector. The collector attracts the positive ions toward it. As the ions stream from the emitter to the collector, they collide with uncharged air molecules, causing what is termed an ionic wind that flows between the emitters and collectors, propelling the plane forward.

This ionic wind replaces the flow of air that a jet engine or propeller would create.

I have led research that has explored how this type of propulsion actually works, developing detailed knowledge of how efficient and powerful it can be.

My team and I have also worked with electrical engineers to develop the electronics necessary to convert batteries’ output to the tens of thousands of volts needed to create an ionic wind. The team was able to produce a power converter far lighter than any previously available. That device was small enough to be practical in an aircraft design, which we were ultimately able to build and fly.

Steven Barrett speaks in a ‘Nature’ mini-documentary about the first flight of an ionic-wind-driven plane.

Our first flight is, of course, a very long way from flying people. We’re already working on making this type of propulsion more efficient and capable of carrying larger loads. The first commercial applications, assuming it gets that far, could be in making silent fixed-wing drones, including for environmental monitoring and communication platforms.

Looking farther into the future, we hope that it could be used in larger aircraft to reduce noise and even allow an aircraft’s exterior skin to help produce thrust, either in place of engines or to augment their power. It’s also possible that electroaerodynamic equipment could be miniaturized, enabling a new variety of nano-drones. Many might believe these possibilities are unlikely or even impossible. But that’s what the engineers of the 1960s thought about what we’re already doing today.