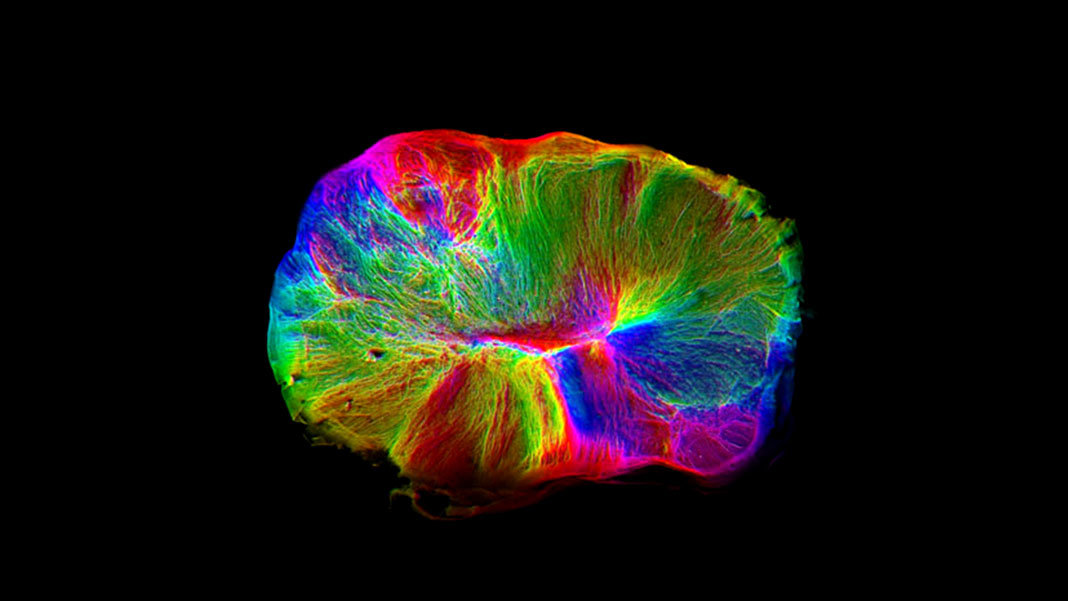 Floating inside a petri dish in a lab at Cambridge University, a single disjointed muscle twitched.

Normally that’s not news. But in this case, the surgically-dissected muscle is controlled by a slice of isolated brain tissue grown entirely inside the lab.

As creepy as that sounds, the system doesn’t represent consciousness in a jar. Rather, it’s a massive step forward for a technology called brain organoids—cultured brain tissue that remarkably resembles the real thing in a developing human fetus.

Scientists have long strived to model the intricate dance of brain development as a fetus grows inside the womb. Newborn brain cells, under the guidance of genetic and chemical factors, automatically migrate towards their ultimate destination, obtaining unique characteristics and establishing connections between each other en route.

It’s a horrendously complex orchestra with no room for mishaps. Any mistake in location targeting, migration, or circuit formation could trigger severe developmental disorders such as autism, schizophrenia, and epilepsy.

This month, a team led by Dr. Madeleine Lancaster at Cambridge University took a crack at unraveling the first steps of human brain development—without relying on ethically controversial aborted fetuses. Their system, dubbed ALI-CO, consists of long-lived slices of cultured, lab-grown brain tissue floating on the surface of a warm, bubbling nutrient bath that helps the slices mature into human mini-brains.

When cultured together with the spinal cord and its supporting muscles isolated from embryonic mice, the mini-brain slices automatically reached out and formed connections called synapses. These human-mice chimeric synapses weren’t just for anatomic show: when stimulated, the highway-like “tracts” of neural connections repeatedly sparked electrical bursts that made the muscles zombie-dance.

“Obviously we’re not just trying to create something for the fun of it,” said Lancaster. The system could galvanize efforts that study “neural connectivity on a complete circuit, with both input and output,” the authors wrote. Eventually, they may enlighten how neural circuit wiring and information processing gradually emerge in our developing brains, how the process sometimes goes wrong, and how to fix it—long before we’re born.

Back in 2014, Lancaster developed a culture system in the lab that allowed her to grow living brain tissue from human skin samples. These grotesque nuggets of cells, when kept comfortable inside a spinning bioreactor, eventually develop into pale, pea-sized chunks that eerily resemble the brains of nine-week-old fetuses. Under the microscope, their innards segregate into notable brain regions such as the hippocampus—the memory center—and the layer-cake structure of the cortex.

Brain organoids became an instant hit. Because their origin is human and they take on the trajectory of a normal developing fetus, they’re valuable models to study how our own brains wire up during early development. Even better, unlike actual brains, scientists can tinker with their genetic makeup, making the brain blobs irresistibly valuable for studying brain disorders. So far, the minibrains have aided research in Zika virus-trigged microcephaly, neurodevelopmental disorders, and deadly brain cancers. They may even answer the ultimate mystery of human intellect: why are our brains particularly special?

Yet for all their shining future, minibrains have a dark heart. The larger and longer they grow, the harder it is for oxygen and nutrients to seep into their inner cores. In less than a year, without a functional blood supply, the organoids begin to rot from the inside. One trick is to transplant them into a mouse’s brain, allowing the animal’s blood supply to feed the artificial brain tissue.

To get around these limitations, Lancaster’s team took a drastic approach: chop ’em up.

The move isn’t without precedence. Scientists have previously sliced up fetal brain tissue and kept it alive inside nutrient baths to further study. And don’t worry—the chunks, with fewer neurons than that of a cockroach, were far from conscious.

Mimicking this previous approach, Lancaster’s team took mature minibrains—roughly 60 days old—and sliced them into chunks 1/100 of an inch thick. Waiting until the brain organoids established their general organization, but before the rotting began, was key to better preserve their interior structure as the chunks further developed.

The slices were then babied inside culture dishes filled with a warm oxygen-bubbled nutrient bath. To ensure optimal development, the team kept the slices floating right at the surface of the liquids, like leaves floating on top of a tumultuous lake. Keeping the sections at the air-liquid interface, or ALI, explained the team, allowed the cells within to develop in perfect health for up to a year—much longer than previous attempts at culturing brain nuggets completely outside the body.

A few quick tests rapidly confirmed that the cultured lab-brains were completely alive and thriving.

Although chopped up, neurons in the slices further matured into information-processing units that spontaneously formed connections—both within slices, and sprouting electrical cables that reached outwards into the void.

Compared to full brain organoids of the same age, the chunks were basically spring chickens: at a year old, their neurons and other brain cells looked shockingly healthy. ALI-CO also had fewer dead cells in their population, which is paramount for the overall health of the slices. The live neurons performed as expected: they spontaneously cranked out electricity (do ALI-COs dream of electric sheep?) and fired when artificially stimulated by the team, in a manner similar to their natural doppelgangers.

ALI-CO also won for its diversity. Using an extremely popular technology called RNA sequencing, the team profiled the cells within ALI-CO and found almost the entire gamut of cells normally observed in the cortex of a human brain—with each connecting to others in a characteristic pattern particular to the cell type.

Thanks to their free-flowing nature inside petri dishes, the team was able to track the development of neural branches within ALI-CO live under the microscope. Similar to a developing brain, the vine-like structures grew into connectivity tracts—information highways essential to rapidly transferring data across brain regions.

In a final test for functionality, the team cultured the organoids together with mouse spinal cords. The tissue, surgically dissected from embryonic mice, came with muscles lining the spinal cord for movement and support. Within two to three weeks, the organoids reached out tendrils towards the spinal cord and established connections.

“We like to think of them as mini-brains on the move,” said Lancaster.

Seen live under the microscope, the isolated muscles began to spontaneously contract. Although cultured muscle tissue sometimes twitches automatically, these contractions were far stronger and coordinated. A few zaps to the floating minibrain chunk was enough to galvanize the dissected spinal cord and muscle into coordinated contractions—the stronger the current, the harder the twitching.

The lab-grown, human-mouse neural circuit acted surprisingly similar to a normal human muscle contraction: although the commands were given by an artificial human brain chunk, the mouse muscles moved on time with the correct intensity.

Going forward, the team hopes ALI-COs can further inform us about how our brains develop.

“This approach is likely to be a useful new tool,” they said, because of how easy it is to set up and how well it mimics human brain connectivity—both when it works and when it doesn’t.

“Our hope is that by modeling ever more closely specific features of the developing human brain, one day we will be closer to understanding…debilitating diseases” such as autism and schizophrenia, the authors concluded.