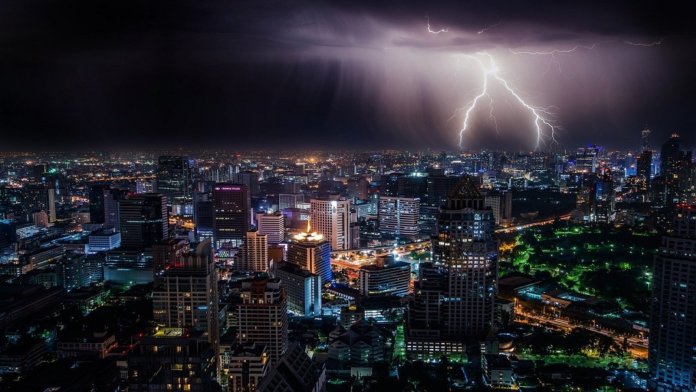 Will getting full bars on your 5G connection mean getting caught out by sudden weather changes?

The question may strike you as hypothetical, nonsensical even, but it is at the core of ongoing disputes between meteorologists and telecommunications companies. Everyone else, including you and I, are caught in the middle, wanting both 5G’s faster connection speeds and precise information about our increasingly unpredictable weather. So why can’t we have both?

Perhaps we can, but because of the way 5G networks function, it may take some special technology—specifically, artificial intelligence.

Around the world, the first 5G networks are already being rolled out. The networks use a variety of frequencies to transmit data to and from devices at speeds up to 100 times faster than existing 4G networks.

One of the bandwidths used is between 24.25 and 24.45 gigahertz (GHz). In a recent FCC auction, telecommunications companies paid a combined $2 billion for the 5G usage rights for this spectrum in the US.

However, meteorologists are concerned that transmissions near the lower end of that range can interfere with their ability to accurately measure water vapor in the atmosphere. Wired reported that acting chief of the National Oceanic and Atmospheric Administration (NOAA), Neil Jacobs, told the US House Subcommittee on the Environment that 5G interference could substantially cut the amount of weather data satellites can gather. As a result, forecast accuracy could drop by as much as 30 percent.

Among the consequences could be less time to prepare for hurricanes, and it may become harder to predict storms’ paths. Due to the interconnectedness of weather patterns, measurement issues in one location can affect other areas too. Lack of accurate atmospheric data from the US could, for example, lead to less accurate forecasts for weather patterns over Europe.

Water vapor emits a faint signal at 23.8 GHz. Weather satellites measure the signals, and the data is used to gauge atmospheric humidity levels. Meteorologists have expressed concern that 5G signals in the same range can disturb those readings. The issue is that it would be nigh on impossible to tell whether a signal is water vapor or an errant 5G signal.

Furthermore, 5G disturbances in other frequency bands could make forecasting even more difficult. Rain and snow emit frequencies around 36-37 GHz. 50.2-50.4 GHz is used to measure atmospheric temperatures, and 86-92 GHz clouds and ice. All of the above are under consideration for international 5G signals. Some have warned that the wider consequences could set weather forecasts back to the 1980s.

Telecommunications companies and interest organizations have argued back, saying that weather sensors aren’t as susceptible to interference as meteorologists fear. Furthermore, 5G devices and signals will produce much less interference with weather forecasts than organizations like NOAA predict. Since very little scientific research has been carried out to examine the claims of either party, we seem stuck in a ‘wait and see’ situation.

To offset some of the possible effects, the two groups have tried to reach a consensus on a noise buffer between the 5G transmissions and water-vapor signals. It could be likened to limiting the noise from busy roads or loud sound systems to avoid bothering neighboring buildings.

The World Meteorological Organization was looking to establish a -55 decibel watts buffer. In Europe, regulators are locked in on a -42 decibel watts buffer for 5G base stations. For comparison, the US Federal Communications Commission has advocated for a -20 decibel watts buffer, which would, in reality, allow more than 150 times more noise than the European proposal.

How AI Could Help

Much of the conversation about 5G’s possible influence on future weather predictions is centered around mobile phones. However, the phones are far from the only systems that will be receiving and transmitting signals on 5G. Self-driving cars and the Internet of Things are two other technologies that could soon be heavily reliant on faster wireless signals.

Densely populated areas are likely going to be the biggest emitters of 5G signals, leading to a suggestion to only gather water-vapor data over oceans.

Another option is to develop artificial intelligence (AI) approaches to clean or process weather data. AI is playing an increasing role in weather forecasting. For example, in 2016 IBM bought The Weather Company for $2 billion. The goal was to combine the two companies’ models and data in IBM’s Watson to create more accurate forecasts. AI would also be able to predict increases or drops in business revenues due to weather changes. Monsanto has also been investing in AI for forecasting, in this case to provide agriculturally-related weather predictions.

Smartphones may also provide a piece of the weather forecasting puzzle. Studies have shown how data from thousands of smartphones can help to increase the accuracy of storm predictions, as well as the force of storms.

“Weather stations cost a lot of money,” Cliff Mass, an atmospheric scientist at the University of Washington in Seattle, told Inside Science, adding, “If there are already 20 million smartphones, you might as well take advantage of the observation system that’s already in place.”

Smartphones may not be the solution when it comes to finding new ways of gathering the atmospheric data on water vapor that 5G could disrupt. But it does go to show that some technologies open new doors, while at the same time, others shut them.