Your Personal Data Is Worth Money. Andrew Yang Wants to Get You Paid 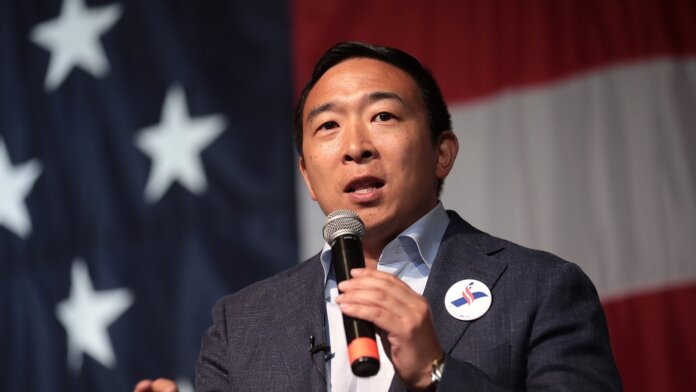 Contact tracing has been a somewhat controversial tool for fighting coronavirus in the US. American consumers wanted privacy to be preserved, so Apple and Google set about devising an API that could help track potential Covid-19 outbreaks while keeping users’ identities anonymous. But what many of us seemed to forget during conversations about contact tracing is that we’re already living under a digital microscope, with multiple companies following and recording our every move.

Indeed, just going about our daily routines can generate hundreds of data points, from where we went to how much time we spent there to what we bought, ate, or drank. Essentially, we’re freely giving away all kinds of data to companies that analyze, package, sell, and profit from it—not just every day, but every hour.

Former Democratic presidential candidate and entrepreneur Andrew Yang wants to change this, and he’s rolling out a framework to do so. Yang is most well-known for his support of a universal basic income of $1,000 a month for every American. UBI would be a central tenet of building what he calls a human-centered economy, which entails a form of capitalism that measures economic success by peoples’ well-being rather than by corporate profits or GDP.

Putting lower-earning citizens on a more equal basis from which to pursue opportunities is one piece of a human-centered economy—that’s where UBI comes in. Dismantling the systems that allow big companies to rake in billions while the average Joe lives paycheck to paycheck is another piece—and that’s where Yang’s newly-launched Data Dividend Project (DDP) comes in.

On its website, the DDP is described as “a movement dedicated to taking back control of our personal data.” There’s not a ton of information about how the project is going to accomplish this, but it seems like a big part of it is raising awareness and mobilizing people; as the site states more than once, individual consumers can’t do much to fight big companies or request payment for data, and the more people involved, the more leverage they’re likely to have. Yang’s ultimate goal is for Americans to be able to claim their data as a property right and get paid for it if they choose to share it.

By signing up, you give the DDP permission to act as an authorized agent to exercise your legal rights under the recently-enacted California Consumer Privacy Act (CCPA). The act went into effect on January 1 of this year, and it gives consumers in California the right to know how their personal data is being collected and shared, the right to request that their data be deleted, and the right to opt out of the sale or sharing of their personal information. The act also prohibits businesses from selling the personal info of consumers under age 16 without explicit consent.

The law only covers California right now, but Maine and Nevada recently passed similar bills, and according to the DDP’s website, 10 other states are considering doing so. If you sign up and your state doesn’t yet have a relevant bill, you’ll be notified when (or if) one is passed in the future. Europe is a couple years ahead of the US; its General Data Protection Regulation (GDPR) went into effect in May of 2018.

According to the DDP’s website, data brokering is a $200 billion industry. “We are completely outgunned by tech companies,” Yang told The Verge. “We’re just presented with these terms and conditions. No one ever reads them. You just click on them and hope for the best. And unfortunately, the best has not happened.”

Yang has a point. When was the last time you thoroughly read the terms and conditions—and understood all the legal gibberish therein—before signing up for a service or downloading an app?

But Yang’s Data Dividend quest is likely to be an uphill battle. There’s some serious distance between having the right to know how your data is being collected and getting cash in your pocket from the companies collecting it.

A philosophy called dataism, first described in 2013, takes the opposite stance: dataists advocate for handing over as much information and power as possible to data-driven algorithms, thus allowing the free flow of data to unlock unprecedented innovation and progress.

In a pretty big way, we’re all benefiting from the way companies use our data; we get to use apps and services for “free” and the providers get our data in exchange. They then use that data to (among other things, of course) improve the product.

GPS apps, for example, are free to use, and they save us time and stress. We’ve accepted the fact that they may be tracking or recording our movements as part of the deal, and most of us would rather give up that data than pay for the app. Similarly, Facebook is a free, easy way to keep in touch with your friends, and those of us who use it have tacitly agreed to let the platform collect all kinds of information about us in exchange.

The catch, though, is that especially in Facebook’s case, most of us didn’t realize just how far this went until it was too late to do anything about it (other than deleting your account, but even that wouldn’t erase years’ worth of data already collected).

Last year’s Netflix movie The Great Hack detailed the dark side of data collection, centered around the 2016 Cambridge Analytica scandal. The movie describes how “psychometric profiles” exist for you, me, and all of our friends. The data collected from our use of digital services can be packaged in a way that gives companies insight into our habits, preferences, and even our personalities. With this information, they can do anything from show us an ad for a pair of shoes we’ll probably like to try to change our minds about which candidate to vote for in an election.

With so much of our data already out there, plus the fact that most of us will likely keep using the free apps we’ve enjoyed for years, could it be too late to try to fundamentally change the way this model works?

Maybe not. Think of it this way: we have a long, increasingly automated and digitized future ahead of us, and data is only going to become more important, valuable, and powerful with time. There’s a line (which some would say we’ve already crossed) beyond which the amount of data companies have access to and the way they can manipulate it for their benefit will become eerie and even dystopian.

So have at it, Mr. Yang. Though they say the best things in life are free, the reality is that most things come with a cost—monetary or otherwise.