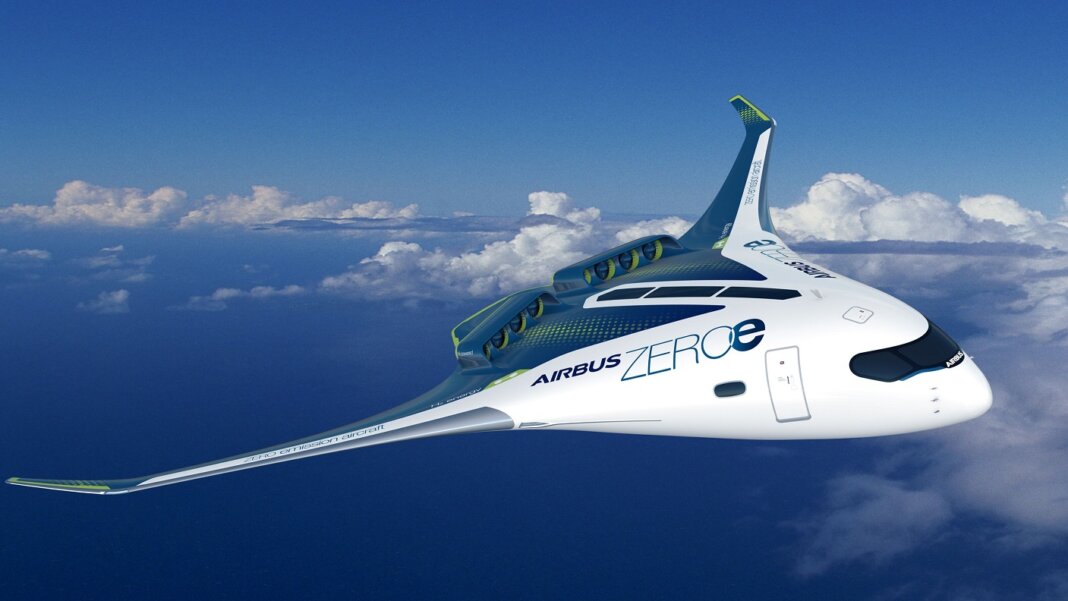 Air travel has plummeted during the pandemic; not only do a lot of people not feel safe being in airports or on planes, but with everything we used to do being closed or canceled, we don’t really have anywhere to go.

With all the reduced human movement caused by the pandemic—not just in air travel, but transportation of all kinds—has come a reckoning about our impact on the planet, and calls to find ways to continue the emissions reductions caused by the pandemic even after it disappears from our lives (and boy do we hope that’s soon).

Though air travel may take a while to reach its pre-pandemic levels, it will come back; as of late 2018 demand was growing by almost five percent a year. But it will likely change shape as companies become more environmentally conscious.

To that end, on Monday the European aerospace company Airbus unveiled three new concept aircraft that are zero-emissions. They run on hydrogen combustion using modified gas-turbine engines, and the only byproduct is water.

The Planes, the Planes

The smallest of the three aircraft uses a turboprop engine and can carry up to 100 passengers for a distance of more than 1,000 nautical miles (a nautical mile is based on the circumference of the Earth and is equal to one minute of latitude; it’s a little more than a land-measured mile at 1.15 miles per nautical mile). The turboprop would be used for short-haul trips.

The second aircraft is a turbofan design that can carry 120-200 passengers for 2,000+ nautical miles. It would be able to fly transcontinentally and the liquid hydrogen to power it would be stored and distributed via tanks behind the plane’s rear pressure bulkhead.

On a side note, if you’re wondering what the difference between a turbofan and a turboprop is, that’s probably worth a quick review. In a turbofan, the engine’s turbine drives a fan at the front of the engine, while in a turboprop it drives a propeller at the front of the engine. Both move air to create thrust for the plane, but turboprops are more efficient at lower speeds because the propeller moves more air with a smaller turbine.

Airbus’s final zero-emission aircraft is the coolest-looking of the three: it’s described as a “blended-wing body” design concept where the wings merge with the main body of the aircraft. It will carry 200 passengers and have a range similar to the turbofan concept. The neat part about this one is that its ultra-wide body means the cabin interior could have all kinds of wacky, spacious layouts (private on-board room, anyone?), and there’s also a lot of space for unique hydrogen storage and distribution designs.

Being abundant and cheap, hydrogen was the lifting gas used for airships throughout the early 1900s. But the explosion of the Hindenburg in 1937 scared us away from hydrogen in the ensuing decades, and it’s never really recovered.

On a mass basis, hydrogen has an energy density almost three times that of gasoline—120 megajoules per kilogram (MJ/kg) versus 44 MJ/kg—but on a volume basis these figures are reversed, with liquid hydrogen’s density sitting at 8 megajoules per liter and gasoline’s at 32. That means hydrogen needs to be compressed to get more energy from the same volume, making it heavier.

The weight of an aircraft’s fuel is an important parameter in determining its range; fuel makes up almost half the total weight of a typical long-haul jet, so switching from jet fuel to liquid hydrogen that requires several times more volume to store the same energy presents some challenges. On top of that, hydrogen as a molecule is highly unstable (or, as Elon Musk puts it, “pernicious”) and flammable.

Flying into the Future

Airbus, however, is undeterred. “These concepts will help us explore and mature the design and layout of the world’s first climate-neutral, zero-emission commercial aircraft, which we aim to put into service by 2035,” said Airbus CEO Guillaume Faury.

The Airbus press release acknowledges that for these aircraft to become a reality, there would need to be a massive overhaul of airports’ current refueling infrastructure, which would be expensive and probably slow.

“The transition to hydrogen as the primary power source for these concept planes will require decisive action from the entire aviation ecosystem,” Faury said. “Together with the support from government and industrial partners we can rise up to this challenge to scale up renewable energy and hydrogen for the sustainable future of the aviation industry.”