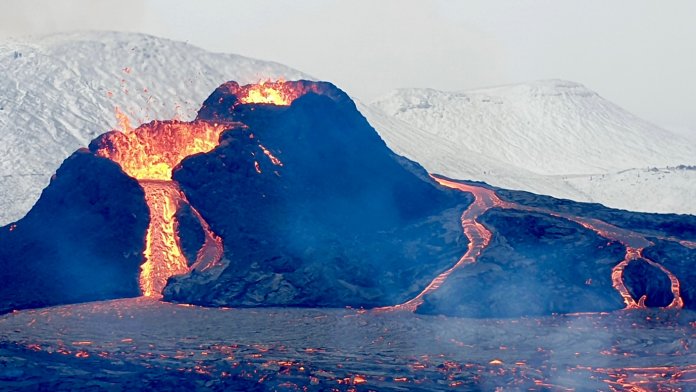 The proliferation of drones bearing cameras has brought many a new sight. Like, a bird’s-eye-view of sharks casually swimming at the local beach—which is, let’s just say, unsettling—or, now, an eyewitness view of a high dive into an erupting volcano.

When Fagradalsfjall, near Reykjavik, began its recent eruption—the first on the Reykjanes Peninsula in some 800 years—drone pilots took advantage.

The volcano poses limited threat to populated areas (with the exception of some noxious fumes).  Still, even though it’s a small eruption, the government warned people the area surrounding the volcano is very dangerous and unpredictable.

The advantage of a drone, of course, is you don’t have to get too close.

Bjorn Steinbekk, a drone pilot from Reykjavik, for example, took the internet on a ride up a river of molten rock and through chunks of lava jumping above the crater. (This wasn’t his only sortie—check out his YouTube channel for more daring runs.)

Then this week, things got hotter when photographer, Garðar Ólafs, positioned his drone directly above the crater and eased it down to capture a close-up of the bubbling lava lake within. There’s just nothing quite as hypnotizing as molten rock—particularly when you’re nowhere near the show.

“I was flying my drone around the eruption and decided it would be cool to see it from straight above,” Ólafs told PetaPixel. “I slowly lowered the drone until all I could see was erupting lava, and when I looked up, I didn’t see the drone anymore. Basically, I was inside the crater of the volcano.”

Like Frodo at Mount Doom, there was a price to pay. Parts of the drone, according to Ólafs, melted in the extreme heat, and although it still flies, it’s developed a few glitches.

But it was worth it, Ólafs said.

Iceland began more closely monitoring the area as early as February 24 when growing seismic activity suggested the movement of magma below the surface and a possible eruption.

The eruption itself was first spotted by webcam and confirmed by satellite on March 19 and has continued steadily since then. It’s considered a small eruption, with a lava field about a half-kilometer across, limited lava fountains and flows, and no ash.

Still, it’s a reminder that we live on a planet in motion. And nowhere is that more evident than in places like Iceland or Hawaii’s Big Island, where volcanoes are continually remaking the Earth’s surface every year.