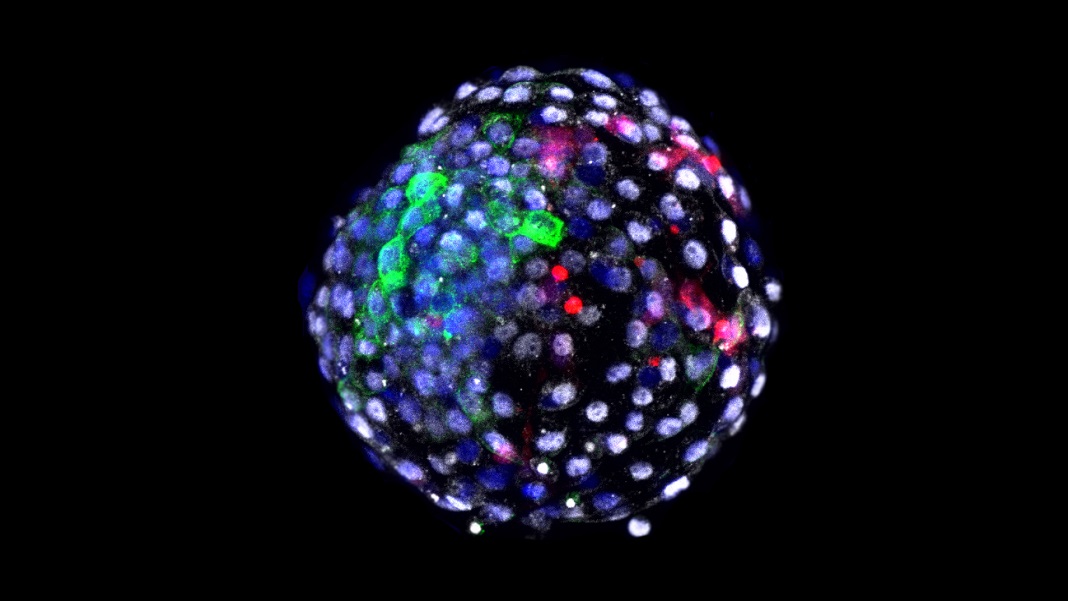 Few things in science freak people out more than human-animal hybrids. Named chimeras, after the mythical Greek creature that’s an amalgam of different beasts, these part-human, part-animal embryos have come onto the scene to transform our understanding of what makes us “human.”

If theoretically grown to term, chimeras would be an endless resource for replacement human organs. They’re a window into the very early stages of human development, allowing scientists to probe the mystery of the first dozen days after sperm-meets-egg. They could help map out how our brains build their early architecture, potentially solving the age-old question of why our neural networks are so powerful—and how their wiring could go wrong.

The trouble with all of this? The embryos are part human. The idea of human hearts or livers growing inside an animal may be icky, but tolerable, to some. Human neurons crafting a brain inside a hybrid embryo—potentially leading to consciousness—is a horror scenario. For years, scientists have flirted with ethical boundaries by mixing human cells with those of rats and pigs, which are relatively far from us in evolutionary terms, to reduce the chance of a mentally “humanized” chimera.

This week, scientists crossed a line.

In a study led by Dr. Juan Carlos Izpisua Belmonte, a prominent stem cell biologist at the Salk Institute for Biological Studies, the team reported the first vetted case of a human-monkey hybrid embryo.

Reflexive shudder aside, the study is a technological tour-de-force. The scientists were able to watch the hybrid embryo develop for 20 days outside the womb, far longer than any previous attempts. Putting the timeline into context, it’s about 20 percent of a monkey’s gestation period.

Although only 3 out of over 100 attempts survived past that point, the viable embryos contained a shockingly high amount of human cells—about one-third of the entire cell population. If able to further develop, those human contributions could, in theory, substantially form the biological architecture of the body, and perhaps the mind, of a human-monkey fetus.

I can’t stress this enough: the technology isn’t there yet to bring Planet of the Apes to life. Strict regulations also prohibit growing chimera embryos past the first few weeks. It’s telling that Izpisua Belmonte collaborated with Chinese labs, which have far fewer ethical regulations than the US.

But the line’s been crossed, and there’s no going back. Here’s what they did, why they did it, and reasons to justify—or limit—similar tests going forward.

The way the team made the human-monkey embryo is similar to previous attempts at half-human chimeras.

Here’s how it goes. They used de-programmed, or “reverted,” human stem cells, called induced pluripotent stem cells (iPSCs). These cells often start from skin cells, and are chemically treated to revert to the stem cell stage, gaining back the superpower to grow into almost any type of cell: heart, lung, brain…you get the idea. The next step is preparing the monkey component, a fertilized and healthy monkey egg that develops for six days in a Petri dish. By this point, the embryo is ready for implantation into the uterus, which kicks off the whole development process.

This is where the chimera jab comes in. Using a tiny needle, the team injected each embryo with 25 human cells, and babied them for another day. “Until recently the experiment would have ended there,” wrote Drs. Hank Greely and Nita Farahany, two prominent bioethicists who wrote an accompanying expert take, but were not involved in the study.

But the team took it way further. Using a biological trick, the embryos attached to the Petri dish as they would to a womb. The human cells survived after the artificial “implantation,” and—surprisingly—tended to physically group together, away from monkey cells.

The weird segregation led the team to further explore why human cells don’t play nice with those of another species. Using a big data approach, the team scouted how genes in human cells talked to their monkey hosts. What’s surprising, the team said, is that adding human cells into the monkey embryos fundamentally changed both. Rather than each behaving as they would have in their normal environment, the two species of cells influenced each other, even when physically separated. The human cells, for example, tweaked the biochemical messengers that monkey cells—and the “goop” surrounding those cells—use to talk to one another.

In other words, in contrast to oil and water, human and monkey cells seemed to communicate and change the other’s biology without needing too much outside whisking. Human iPSCs began to behave more like monkey cells, whereas monkey embryos became slightly more human.

The main reasons the team went for a monkey hybrid, rather than the “safer” pig or rat alternative, was because of our similarities to monkeys. As the authors argue, being genetically “closer” in evolutionary terms makes it easier to form chimeras. In turn, the resulting embryos also make it possible to study early human development and build human tissues and organs for replacement.

“Historically, the generation of human-animal chimeras has suffered from low efficiency,” said Izpisua Belmonte. “Generation of a chimera between human and non-human primate, a species more closely related to humans along the evolutionary timeline than all previously used species, will allow us to gain better insight into whether there are evolutionarily imposed barriers to chimera generation and if there are any means by which we can overcome them.”

That argument isn’t convincing to some.

In terms of organ replacement, monkeys are very expensive (and cognitively advanced) donors compared to pigs, the latter of which have been the primary research host for growing human organs. While difficult to genetically engineer to fit human needs, pigs are more socially acceptable as organ “donors”—many of us don’t bat an eye at eating ham or bacon—whereas the concept of extracting humanoid tissue from monkeys is extremely uncomfortable.

A human-monkey hybrid could be especially helpful for studying neurodevelopment, but that directly butts heads with the “human cells in animal brains” problem. Even when such an embryo is not brought to term, it’s hard to imagine anyone who’s ready to study the brain of a potentially viable animal fetus with human cells wired into its neural networks.

There’s also the “sledgehammer” aspect of the study that makes scientists cringe. “Direct transplantation of cells into particular regions, or organs [of an animal], allows researchers to predict where and how the cells might integrate,” said Greely and Farahany. This means they might be able to predict if the injected human cells end up in a “boring” area, like the gallbladder, or a more “sensitive” area, like the brain. But with the current technique, we’re unsure where the human cells could eventually migrate to and grow.

Yet despite the ick factor, human-monkey embryos circumvent the ethical quandaries around using aborted tissue for research. These hybrid embryos may present the closest models to early human development that we can get without dipping into the abortion debate.

In their commentary, Greely and Farahany laid out four main aspects to consider before moving ahead with the controversial field. First and foremost is animal welfare, which is “especially true for non-human primates,” as they’re mentally close to us. There’s also the need for consent from human donors, which form the basis of the injected iPSCs, as some may be uncomfortable with the endeavor itself. Like organ donors, people need to be fully informed.

Third and fourth, public discourse is absolutely needed, as people may strongly disapprove of the idea of mixing human tissue or organs with animals. For now, the human-monkey embryos have a short life. But as technology gets better, and based on previous similar experiments with other chimeras, the next step in this venture is to transplant the embryo into a living animal host’s uterus, which could nurture it to grow further.

For now, that’s a red line for human-monkey embryos, and the technology isn’t there yet. But if the surprise of CRISPR babies has taught us anything, it’s that as a society we need to discourage, yet prepare for, a lone wolf who’s willing to step over the line—that is, bringing a part-human, part-animal embryo to term.

“We must begin to think about that possibility,” said Greely and Farahany. With the study, we know that “those future experiments are now at least plausible.”