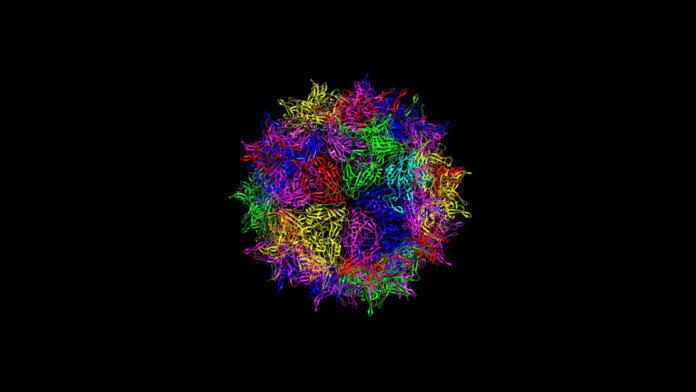 CRISPR has revolutionized genome engineering, but the size of its molecular gene-editing components has limited its therapeutic uses so far. Now, a trio of new research papers detail compact versions of the gene-editing tool that could significantly expand its applications.

While we’ve been able to edit genomes since the 1990s, the introduction of CRISPR in 2015 transformed the field thanks to its flexibility, simplicity, and efficiency. The technology is based on a rudimentary immune system found in microbes that combines genetic mugshots of viruses with an enzyme called Cas9 that hunts them down and chops up their DNA.

This system can be re-purposed by replacing the viral genetic code with whatever sequence you want to edit and precisely snipping the DNA at that location. One outstanding problem, however, is that the system’s large physical size makes it hard to deliver to cells effectively.

Adeno-associated viral vectors (AAVs)—which are small, non-pathogenic viruses that can be re-purposed to inject genetic code into cells—are the gold standard delivery system for in vivo gene therapies. They produce little immune response and have received FDA approval for therapeutic use, but their tiny size makes using them to deliver CRISPR tricky.

Now, however, three research papers published last week show that a family of tiny Cas proteins derived from archaea are small enough to fit in AAVs and can edit human DNA.

The most commonly used Cas9 protein comes from the Streptococcus pyogenes bacteria, which is 1,368 amino acids long. When combined with the RNA sequence needed to guide it to its target, that’s too big to fit in an AAV. And while you can deliver them separately this significantly reduces efficiency as you can’t guarantee every cell will receive both.

But there’s considerable diversity in the proteins used in natural CRISPR systems, so researchers have been screening the microbial world for smaller alternatives.

Two promising candidates are Cas9 proteins from Staphylococcus aureus and Streptococcus thermophilus, which are 1,053 and 1,121 amino acids long, respectively. Their relatively smaller size makes it possible to package them in an AAV along with their guide RNA.

That said, even these two smaller alternatives may not be small enough.

In recent years CRISPR’s capabilities have been expanded significantly, going from simply snipping a single gene to inserting genes, swapping DNA letters, or targeting multiple sites at once. All of this requires much more genetic material to be delivered into the cell, which rules out AAVs.

Yet another family of proteins known as Cas12f has garnered attention for their tiny proportions—generally between 400 and 700 amino acids—but it was not known whether they could be coaxed to work outside microbes.

That’s where last week’s papers, published in Nature Biotechnology and Nature Chemical Biology, come in. Scientists showed that proteins from this family could be packaged inside AAVs along with their guide RNA and delivered to human cells to make effective edits.

A third paper in Molecular Cell used protein engineering to transform a Cas12f protein that didn’t appear to work in mammalian cells into one that did. While the team didn’t actually test whether they could deliver the protein using AAVs, they showed it was small enough, even when combined with a variety of advanced tools like prime and base editors.

These breakthroughs could provide a significant boost to in vivo therapies. CRISPR delivered by lipid nanoparticles—the same mechanism used in mRNA vaccines—is already making its way into the clinic, but this approach is significantly less efficient than AAVs.

These are still very early stage studies though, and despite the promising editing performance, it will take a lot more research to properly characterize the capabilities and safety profiles of these new proteins. If they do turn out to be as effective as the original CRISPR system however, they could dramatically expand the scope of potential therapies.