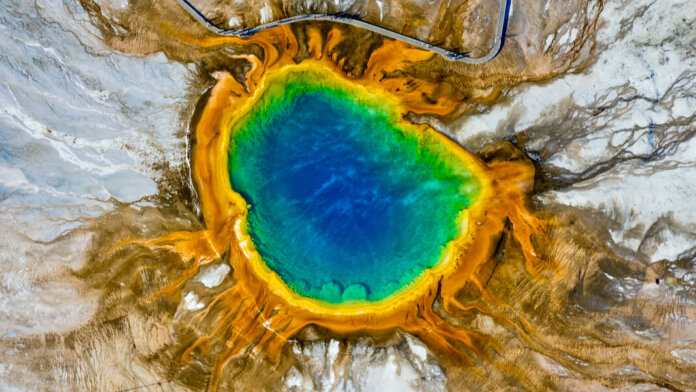 Some 75% of the world’s volcanoes live along the aptly name Ring of Fire. This makes sense. Hugging a boundary between tectonic pates, the Ring of Fire is an open seam on the planet’s interior. But then there’s Hawaii, a chain of volcanic islands smack in the middle of the Pacific plate, far from any boundaries. What feeds its fire?

Scientists have long theorized that columns of superheated rock—piping hot plumes pushing through the mantle to the crust above—explain the Hawaiian islands and other areas like them. Where these columns touch the surface, volcanic hotspots form and the ground erupts. Over millions of years, inch by inch, the Earth’s tectonic plates drag new ground over hotspots and form long volcanic chains.

The theory is old, but actually observing the mantle plumes feeding these hotspots in any detail is fairly new. “Theoretically, we know [plumes] have to exist,” Harriet Lau, a  University of California, Berkeley geophysicist told Quanta Magazine. “But they’re just so hard to see seismically.”

Now, however, in a particularly striking example, a team of scientists have completed a map of the underworld nearly a decade in the making.

The result, beautifully visualized below for a feature in Quanta, is one of the most detailed snapshots yet—and it’s surprisingly complicated. Instead of a simple vertical column rising through the mantle, the structure is tree-like, with roots near the core, a trunk mid-mantle, and finer branching structures sprouting near the surface.

The plume is feeding one the world’s most active volcanoes, Piton de la Fournaise, on the French island of Réunion in the Indian Ocean. But it’s also driving an intensely volcanic region in East Africa, some 3,000 kilometers away. Traveling back in time to when dinosaurs still ruled the planet, it ignited an area known as the Deccan Traps. Now in modern-day India, the Deccan Traps spilled enough lava to bury California, Montana, and Texas.

Seeing Through the Ground Beneath Our Feet

The Hubble Space Telescope is surely a wonder of the world. Imaging galaxies billions of light-years away is impressive—but how exactly does one see through thousands of kilometers of rock? In a sense, geophysicists build ‘telescopes’ too. But instead of sensing light, these systems collect and analyze the planet’s vibrations.

“People have had a longer history and an easier time actually looking up at the stars,” University of Cambridge seismologist Sanne Cottaar told Quanta last year. “Looking down has actually been quite challenging.”

To create this particular model of the underworld, the team drew on data from one of the largest such ‘telescopes’ to date. In 2012, ships dropped 57 seismometers into the ocean around Réunion. The entire array, which included 37 land-based sensors too, spanned some 2,000 kilometers. Over the next 13 months, the sensors recorded subtle vibrations from seismic activity occurring on the opposite side of the world.

As earthquakes rattle the surface, they also ring the planet’s insides like a bell. By correlating a seismic event on one side of the world with the shiver it produces on the other, scientists infer what happened in between. Seismic vibrations tend to move more slowly through hotter areas than cooler areas, for example, so a mantle plume would slow their progress. With enough sensors and seismic events, researchers can construct a model.

The model, in this case, was surprising.

Scientist agree the mantle plumes underlying hotspots are so buoyant and quick-moving they should rise straight up. The diagonally branching paths in the data were unexpected.

The team proposes they occur when temperature differences between hotter and cooler material make some areas of the plume more buoyant, pinching off blobs from the top of the trunk (or cusp) over time, one after another. These blobs do rise vertically but appear to form diagonal branches because older blobs have risen higher than younger ones. Nearer the surface, where the upper mantle is less dense, they spread out and sprout thin branches feeding surface volcanoes.

Because the team drew data from land- and ocean-based sensors—the latter being a traditional hole in seismic imaging—over such a wide area, they form one of the most complete snapshots of a mantle plume to date.

Still, constructing such models is challenging and somewhat dependent on interpretation. Other artifacts, like the mineral make-up of the rock, can also slow seismic waves.

So, while the research and model have been well-received, the study of mantle plumes is yet a work in progress for the scientific community.

Imaging Earth’s interior is fascinating work. It can clue us in to planetary changes on the continental scale and even augur future cataclysms.

The branch of the plume under East Africa may be splitting the continent in two. Tens of millions of years from now, the plume’s southern branch may send up a blob so titanic it will put the Deccan Traps to shame. Meanwhile, other locations, like the supervolcano under Yellowstone, have yet to be connected to either of Earth’s two major mantle plumes. A more complete telling of Yellowstone’s origin story will help us better understand (and perhaps predict) its explosive future.

This work, then, is a new page in the tale of the epic forces shaping and cultivating Earth as we know it—but there’s no doubt much more to learn.