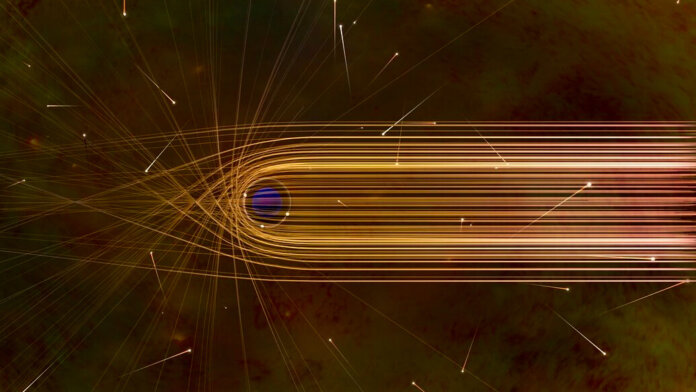 The lunar surface is a record of the solar system’s violent origins. But look closely enough and we may find something even more exotic there—the cratered remains of an impact with a black hole the size of an atom, birthed in the first moments of the universe.

According to a theory proposed by Bernard Carr and Stephen Hawking in the 1970s, the conditions just after the Big Bang were so energetic, the matter so tightly packed, that density fluctuations in the primordial soup collapsed into black holes of all sizes.

On one end of the spectrum, the ancestors of supermassive black holes emerged—on the other end, tiny black holes, some no larger than atoms.

Which is where a new study comes in.

If swarms of tiny black holes have ever zipped through the solar system, a select few of them may have punched holes in planets and moons.

On Earth, the scars of such collisions would have long healed, eroded away by the work of wind, water, and plate tectonics. But the moon’s surface is another matter. If a mini black hole punctured the moon, the crater could still be there. We could find it.

According to the paper, published in Monthly Notices of the Royal Astronomical Society in June, a collision with a mini black hole ought to leave a distinct signature. The study’s authors, Matthew Caplan and Almog Yalinewich, propose we survey the moon’s surface for craters with the right attributes. If we find one (or more) such craters, and confirm its origin, we’d have found evidence not only of primordial black holes but a dark matter candidate too.

Caplan admits it “sounds a little wild,” but that’s kind of the point. “When people think about dark matter, they’re usually fixated about … trying to extend existing methods, for the most part,” he told CNET. “It’s very rare that people try to think outside the box.”

Birth of a Black Hole

Not long after Hawking and Carr suggested primordial black holes could still be wandering the cosmos, researchers realized they could solve another riddle: the nature of dark matter. Stars orbit their galaxies much too fast given all the matter we can see. This invisible component, whose gravity can clearly be observed in stellar orbits, is called dark matter. To this day, no one knows what it is.

Over the years, the most popular dark matter theory has suggested it’s made up of weakly interacting massive particles (WIMPS), but scientists have yet to find any such particles.

In parallel, the notion that primordial black holes could comprise some of the universe’s dark matter has gone in and out of fashion as evidence has tipped the scales this way and that. But in 2016, the first detection of gravity waves jolted the idea back to life.

That scientists had recorded ripples in the fabric of space-time, caused by the enormous collision and merger of two black holes, was mind-boggling enough. But after a closer look, the masses of the two black holes involved made researchers do a double take.

Star-sized black holes commonly form when a giant star, many times the size of our sun, exhausts its internal fuel and collapses in on itself. The star’s outer shell is blasted away in a brilliant explosion called a supernova, while the core, unable to resist gravity, implodes into a point of extreme density. Gravity becomes so strong near the center of a black hole that, beyond a threshold called the event horizon, nothing, not even light, can escape.

Before the Laser Interferometer Gravitational-Wave Observatory (LIGO) detected its first black hole merger, the largest star-sized black holes astronomers had discovered were about 20 times the mass of our sun. The black holes in LIGO’s first observation were over 30 solar masses, the biggest yet discovered.

Many of the subsequent 90 detections have involved black holes with masses in the same range or even larger, with some weighing as much as 100 solar masses. Primordial black holes, it’s believed, ought to be found in this larger mass range (and also in ranges smaller than a single solar mass).

We already know, for example, that the very smallest black holes—those with masses below your average asteroid—would have evaporated by now. Others might still be around but should emit X-rays we could observe and measure.

Hawking famously established that black holes radiate energy away, and given a long enough time, they disappear in a flash. But primordial black holes with slightly larger masses, yet still not much larger than atoms, would have lifespans longer than the current age of the universe and wouldn’t otherwise be detectable.

“This is why our paper is significant,” Yalinewich told CNET. “We prove a range that can’t be proven by other methods.”

Focusing on black holes in this range, Caplan and Yalinewich modeled the impact of an average asteroid or meteorite and compared it to that of a mini black hole. They found the two would be noticeably different.

The former would be roughly the same density as the moon and transfer all its energy on impact; the latter would be far more dense than the moon and would punch straight through to the other side with little resistance.

But here’s the key: In a standard impact—and this would apply to most of the moon’s craters—the ring of material ejected at impact would pile up at a shallower angle than that ejected by a mini primordial black hole. This steep “ejecta blanket” is a critical signature.

Caplan and Yalinewich write that primordial black hole craters ought to be at least a meter across, within the resolution of the Lunar Reconnaissance Orbiter. Of course, the moon is not lacking for craters. So, the pair suggest training a machine learning algorithm to scour orbiter images of the moon’s surface for just the right ones.

Even then, the work isn’t over. Some craters with steep ejecta blankets aren’t of exotic origins. Final confirmation would require future missions to sample lunar regolith and look for silica and quartz fused by the extreme conditions in such an impact.

Even if all dark matter were explained by mini primordial black holes, Caplan and Yalinewich calculate the odds of a lunar impact at 10 percent. So, the real likelihood is lower than that. Also, although they estimate such craters would last a billion years on the moon before being erased by time and showers of meteorites, Purdue’s David Minton questioned that number—suggesting it might be more on the order of just 13 million years.

Yalinewich agreed, but countered that the ejecta itself should last longer and still be identifiable. And there are other well-preserved surfaces in the solar system. Future missions could look for evidence of mini primordial black hole impacts on Mercury, Mars, Pluto, or rocky moons in the outer solar system.

“If you look at the combined surface area of all these,” Yalinewich said, “you should expect at least one of these exotic craters to appear.”