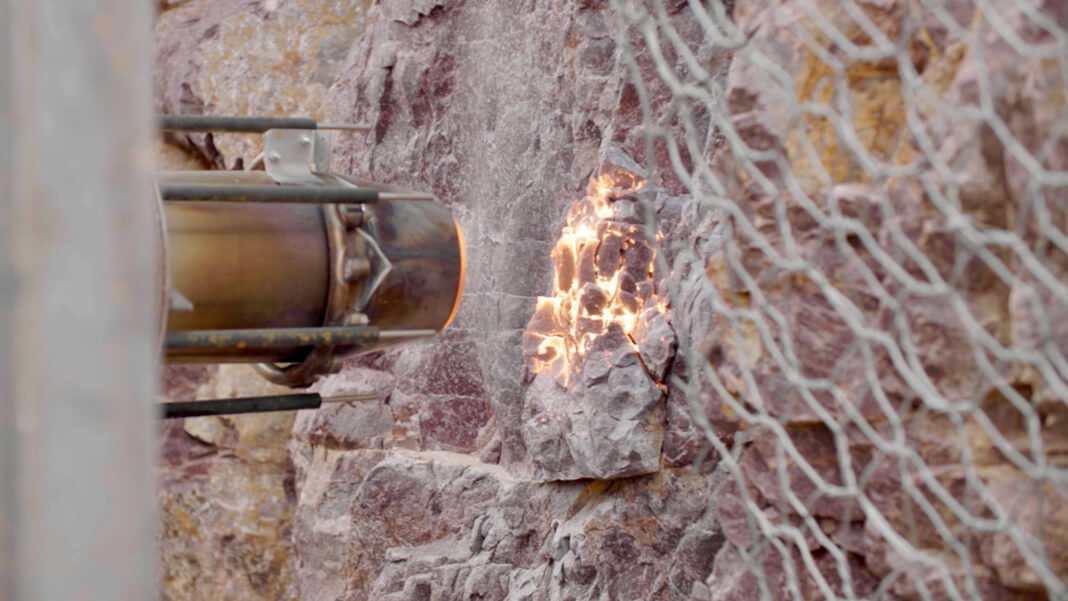 In science fiction movie, The Core, an intrepid crew journeys to the center of the Earth in a vessel that melts through the planet’s crust and mantle with a giant laser. Drilling startup, Petra, was founded on a similar idea. But they had a problem.

What do you do with all the lava?

In The Core, you don’t do anything with it because it’s science fiction, and the vessel, Virgil, is made of a fanciful material called unobtainium that not only withstands extreme heat and pressure but also converts it into energy that somehow further reinforces Virgil’s hull.

To be clear, their first prototype didn’t use lasers, rather it melted rock with a plasma torch. But when the team realized disposing of all that magma was a bit of an issue, they decided to try pulverizing the rock with superheated gas instead.

The new rig is a robot, semi-automated with machine vision, that tunnels through solid rock without touching it. (Though the drilling itself is contact-free, the robot touches the surface with sensors.)

In a recent trial of the tech, the Petra team decamped to Minnesota to pit their tunneling robot, Swifty, against Sioux Quartzite, one of the world’s toughest rock types. After setting Swifty up and hitting the gas, they made quick work of a 20-foot demonstration bore hole.

“…we averaged an astounding one-inch-per-minute in a geology usually excavated by dynamite,” said Ian Wright, Petra’s CTO and a Tesla cofounder, in a press release. “No tunneling method has been able to tunnel through this kind of hard rock until now. Petra’s achievement is due to Swifty’s thermal drilling method which efficiently bores through rock without touching it.”

Next stop, the center of the Earth? Not so much. The company has some fairly specific plans in mind for the near future.

While other startups, like Elon Musk’s Boring Company, focus on tunnels big enough for roads, Petra is aiming to hollow out tunnels 20 to 60 inches in diameter to bury utilities. (Though Wright cofounded Tesla, he says he wasn’t involved in the Boring Company.)

Cofounder and CEO Kimberly Abrams was motivated to start a company to tackle the challenge in 2018 when downed power lines sparked the devastating Paradise wildfire in California. That fire, and others since, led California utility PG&E to pledge to bury 10,000 miles of power lines in the riskiest areas at an estimated cost of $15 billion to $30 billion. With $65 billion from the recently passed $1.2 trillion infrastructure bill earmarked for grid improvements, demand for alternative boring technologies may grow in coming years.

“What we realized in 2018 was that some of the most disaster-prone areas of the country were also the areas that had these nightmare geologies that no utility company or construction company could bore utility tunnels through—geologies of granite and basalt that stopped tunneling projects in their tracks and that cause billions of dollars of cost overruns,” Abrams said to Forbes.

Expense is a reason utilities haven’t buried more power lines in the past. John Fluharty, a contractor who works with utility companies to install pipelines, told Wired that its costs five times more to bury lines as opposed to stringing them pole-to-pole above-ground and up to 20 times as much when the buried lines need to travel through hard rock.

Abrams said the company think their tech could reduce costs by 50 to 80 percent.

The process, called thermal spallation drilling, isn’t new, but has yet to be widely commercialized. Petra isn’t sharing technical details, citing competitive concerns. Generally, though, Swifty breaks rock into small pieces with a jet of gas heated to 1,800 degrees Fahrenheit and uses a vacuum to clear the shattered remains from the tunnel. The non-contact method makes quick work of hard rock without suffering broken cutter heads.

It’s much too early to know how much of an impact Petra’s technology will have, but the company, which emerged from stealth only recently, has raised $33 million to find out. Up next are tests out in the field on materials like granite, dolomite, limestone, and basalt.

Burying utilities, power lines in particular, would likely take many years to complete, even after new innovations prove themselves. But it seems a worthy project.

In addition to reducing the risks of disasters like wildfires, burying utilities infrastructure can also reduce longterm maintenance costs. And the grid is only likely to grow as demand for renewable energy and electric vehicles increases.

But besides practical and safety benefits, wouldn’t it be just lovely to hide the mess of cables electrifying the planet, too?