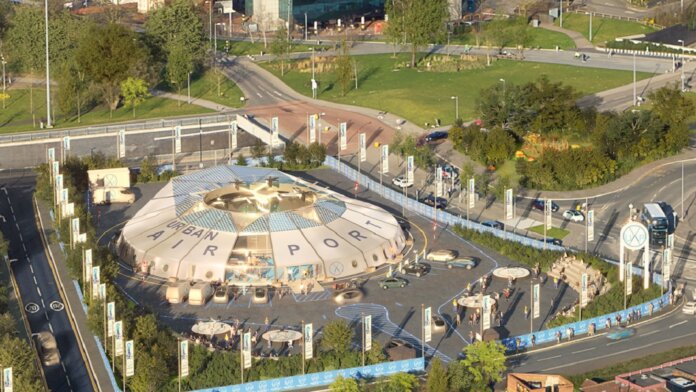 At the Consumer Electronics Show in Vegas two years ago, Hyundai and Uber unveiled an air taxi concept they’d partnered on, claiming people would be riding in the flying vehicles by 2030. Now Hyundai has taken an important step towards making that prediction a reality. The company just invested in a British startup called Urban-Air Port, which has plans to build 200 hubs for flying taxis in 65 different cities over the next 5 years.

In November 2021 Hyundai announced that its Urban Air Mobility Division was becoming a new subsidiary called Supernal. Supernal is developing a family of electric air vehicles, with plans to launch its first commercial flight in 2028, and announced last week that it had bought a minority stake in Urban-Air Port. The company hopes to scale its operations—that is, they’re envisioning a near future where air taxis glide across city skies in much the same way rideshare vehicles zoom around city streets.

All that gliding won’t do much good, though, if the vehicles don’t have dedicated takeoff and landing sites. For people to start using air taxis, they’ll need to offer not just speed, but convenience. Airports tend to be located at least a half-hour drive from urban centers, and a key function of air taxis will be to act as, well, taxis—that is, providing transportation not only between cities, but from point A to point B within cities, be it from home to the office (if that ever becomes a thing again), from the airport to a client meeting, from one medical center to another, etc.

“If it’s far away and hard to get to, it won’t be used,” Ricky Sandhu, Founder and Executive Chairman of Urban-Air Port told Singularity Hub in an email. “If it’s right downtown opposite the train station, 60 seconds from the city center or your office, it will be used and will become routine.”

Taxis or ride hailing services can drop riders off anywhere in a city because the infrastructure is there: roads. Not so for air taxis, and to make them truly feasible as a transit method, cities will need more than just two or three “vertiports.” That’s what Urban-Air Port is calling its hubs, since the vehicles that utilize them will take off and land vertically, like a drone or helicopter. They won’t need runways, which will make it easier to find viable locations to put the vertiports—though based on the company’s teaser video, they won’t be plopping these things down on top of high-rises.

The lotus-flower-like design looks like it will require at least a full city block’s worth of space. The company says an Urban-Air Port is 60 percent smaller than a traditional heliport, can be installed in days, can be easily relocated if needed, and is net-zero on carbon emissions.

Air-One, the company’s first hub, is scheduled to open in April in Coventry, UK. The vertiport was built in partnership with Munich Airport International, and its goal is “to demonstrate an ultra-compact, rapidly deployable, multi-functional operations hub for manned and unmanned vehicles.” Besides passenger vehicles, the vertiports will also be for cargo-carrying drones. Air-One will trial heavy-lift drones with a maximum take-off weight of over 125 kilograms (275 pounds); it will be the first time this type of drone operates within a populated area.

Despite its seemingly slow growth, analysts predict that the global urban air mobility market will reach a value of $12.4 billion by 2027, almost double its 2020 value of $6.4 billion. Urban-Air Port’s website asserts that lack of ground infrastructure is “the largest single constraint to sustainable air mobility.”

Sandhu emphasized that vertiports will focus on the customer experience, aiming to make flying a more seamless and pleasant journey than it currently is. Airports and helipads “have vast swathes of tarmac, which slows the vehicle and passenger processing times and impacts capacity and in turn uptake and costs,” he said. “The passenger experience has never been important. For EVTOL, [the] technology allows for an entirely new form of infrastructure and experience, and that’s what we are focused on.”

The company hasn’t shared details about specific cities for the 200 vertiports it plans to build, but did say the UK, US, France, Germany, Scandinavia, Australia, South Korea, and Southeast Asia are all on the list. It might do well to include China, Japan, and Canada, as the market for urban air mobility is expected to grow significantly in those countries over the next decade.

It will be a few years yet before you can look up and see a flying taxi crossing the sky, but with Urban-Air Port’s initiative, when you do see them you’ll know they have a place to land.