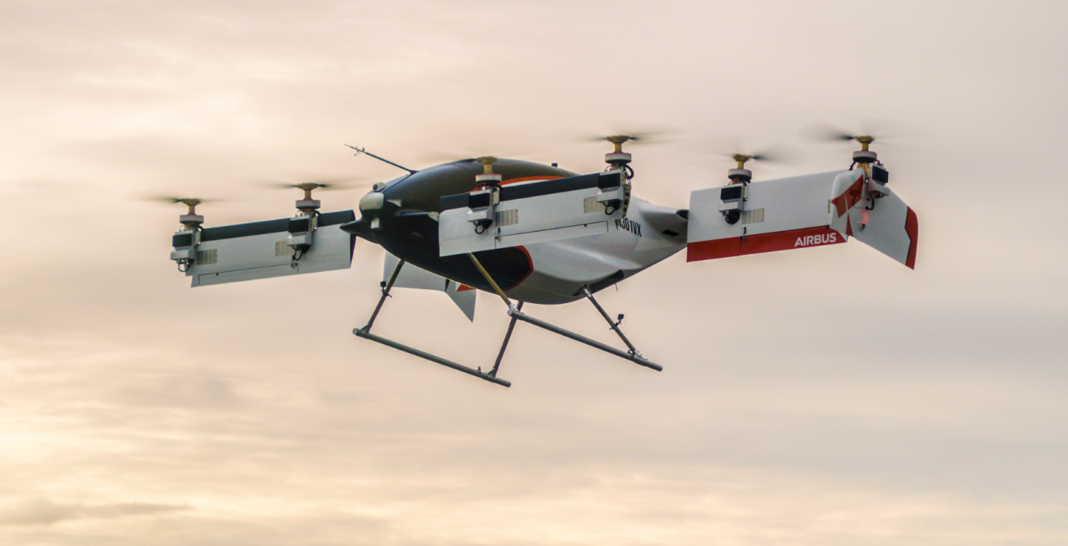 Not too long ago, the notion of flying cars was most comfortably categorized alongside fusion power—a classic tech vision that seemed forever stuck just over the horizon.

Then around five years ago something shifted. Flying cars suddenly appeared plausible again. And not just “roadable planes” or “personal helicopters.” The renewed vision was a flying car (or taxi) for the masses, no pilot’s license, airport, or runway required. Since then, new projects, concepts, and investment have been pouring into the space.

In a talk at Singularity University’s Global Summit in San Francisco last week, Colin Guinn—a serial entrepreneur who cofounded and was CEO of DJI North America and has been on the frontlines of the growing consumer drone market—said it was all about starting small.

Instead of shrinking helicopters or planes, the key has been scaling up multirotor drones. And now, the consumer drone market has become a laboratory and proving ground for the suite of technologies to make autonomous passenger drones a reality.

When will you hail a Lyft or Uber and hop in a flying taxi instead of a car? To answer that, Guinn gave a brief history of how we got here and outlined the challenges still ahead.

Drones That Fly With the Brains and Senses of a Smartphone

You might say the renewed dream of flying cars can thank the iPhone for a new lease on life.

When smartphones went meteoric in the mid-to-late 2000s, money and research flooded into making their sensors and processors cheaper, smaller, faster, and more efficient. These components found their way into remote-controlled aircraft.

Flying remote-controlled helicopters has always been a niche pastime. They aren’t easy to set up, and actually piloting them is even harder. “It was maybe 8 to 10 hours of repairs every time I would do a two- or three-minute flight until I crashed [my first RC helicopter],” Guinn said. “But when the GPS autopilot came out for remote-controlled helicopters, that allowed the helicopter to essentially fly itself, which was by far the biggest barrier [to] entry.”

Enabled by smartphone components, autopilot was also a big breakthrough in consumer drones. Pilots no longer had to keep an aircraft steady. They could instead simply tell it where to go. Add on a stabilized camera and other sensors, automated flights between designated waypoints, and increasing affordability and the consumer drone market took off.

Filmmakers now use drones to make beautifully choreographed shot sequences, companies use them to remotely inspect equipment, farmers use them to monitor crops, and cities are piloting delivery drones for packages. As the market expands, Guinn said, drones are getting more advanced. Recent add-ons include automated flight paths and docking with charging stations, alternative power sources, and traffic management systems.

All this, Guinn said, either has been or will be applied to the drone taxis of the future.

From Scaled Up Drones to Flying Cars

Perhaps the first clue that drones could scale up to carry people was in 2011 when Volocopter notched the first flight of an electric vertical take-off and landing (eVTOL) aircraft. The machine had 18 rotors and no cockpit—just a pilot sitting astride what looked like an exercise ball. But in the last five years, the field’s become more crowded. Chinese startups, tech billionaires, and blue-chip transportation companies have jumped into the fray.

Volocopter has since developed four generations of its eVTOL aircraft, secured funding from Daimler, and recently released its first commercial version. After a much-publicized debut of the Ehang 184 at CES 2016, Ehang agreed to develop its drone for public transportation in Dubai and plans to run a citywide pilot for its flying taxis in Guangzhou, China. Other notables include two projects backed by Larry Page—Kitty Hawk and Opener—and Airbus’s Vahana eVTOL. The latter is of particular significance because of its ability to transition from vertical take-off to horizontal flight with the aid of tilting rotors and lift from wings.

“In the last five years there’s been an amazing amount of effort put into these things,” Guinn said. “You’ve gone from sitting on the [Volocopter] medicine ball eight years ago to Airbus showing off the Vahana and its transition into vertical flight only six months ago.”

The ultimate goal? A safe, autonomous flying car or taxi that can do short or medium hops in, around, and between cities. The interior might have an iPad screen but no controls. You take off from the top of a building, read the news or close your eyes for the ride, and land on a building rooftop on the other end. For those stuck in gridlock back here in the present, it’s a nice dream. So, what’s still standing in the way, and how long until it’s realized?

Drone-makers have made considerable progress in this category, and the same tech that keeps smaller drones stable in the air can (and is) being applied to the bigger ones. In addition to stabilization, the autopilot can monitor the system for safety and automatically compensate for lost rotors or, worst case, deploy a parachute should everything fail.

The main sticking point, Guinn said, is that autopilot for small unmanned drones has millions and millions of flight hours, whereas autopilot in passenger drones doesn’t.

“We’re looking at a couple of years still to gather hundreds of thousands and eventually millions of flight hours on these larger systems,” Guinn said.

Companies will have to go beyond autopilot for passengers to dial in their destination and simply enjoy the ride. This degree of automation depends on progress in beyond visual line of sight operation—an automated flight system that can avoid obstacles and other aircraft—and unmanned traffic management that coordinates everything in the sky.

These systems are critical for smaller drones too, from Amazon Prime Air to inspection and agricultural drones, and millions of hours will go into proving them both. This will “directly translate to a larger system that lands on the roof and puts a person in it,” according to Guinn. But you need a higher degree of confidence for larger systems. This too, then, is two to three years off, he said.

Small drones can fly 20 or 30 minutes before needing to recharge their batteries, and you can do a fair amount of work in that time. Air taxis, on the other hand, need to cover enough distance to make it worth flying instead of driving. Today’s eVTOLs can manage 10- or 20-minute flights, with some nearing a half hour. Guinn doesn’t think that’s enough.

Batteries are on the slow track. So, this one requires a bit of faith. Still, Guinn is optimistic.

“There are tens or maybe over a hundred labs around the world demonstrating 500 to 600-plus watt-hours per kilogram energy density and lithium ion batteries using different anodes, using lithium metals, using lithium air.” Better batteries are coming, he said.

To be widely adopted, Guinn thinks eVTOLs need to be able to go 50 to 100 miles. Expect that mark to be reached and exceeded in the next three to five years.

Depending where you live, regulations are perhaps the biggest roadblock.

In the US, airspace management and regulation is very complicated. The FAA has made progress for small unmanned drones, but for larger aircraft that are automated and carrying passengers? Guinn thinks it’ll take around 10 years to iron out the details.

We’ll have variants on the theme available sooner, like air taxis with onboard pilots ready to take over as needed (think self-driving cars), or recreational rides, like those being developed by Lift Aircraft. There may even be niche opportunities for recreational ultralight flights, and in other countries with more flexible regulatory regimes and aggressive timelines, like Dubai or China, you may be able to hail an air taxi much sooner.

“So, the answer of when can you be doing this thing is fairly subjective depending on where [and] for what purpose,” Guinn said. “But I think there will be some of this going on inside the next few years. [For] wide scale adoption, we’re probably looking at 8 to 12 years, somewhere in that time horizon.”

Given the history of the space, there’s reason to be skeptical. But if consumer drone tech serves as a bellwether and that progress translates to passenger drones, then the prospect of autonomous flying taxis seems to be getting more practical every year.