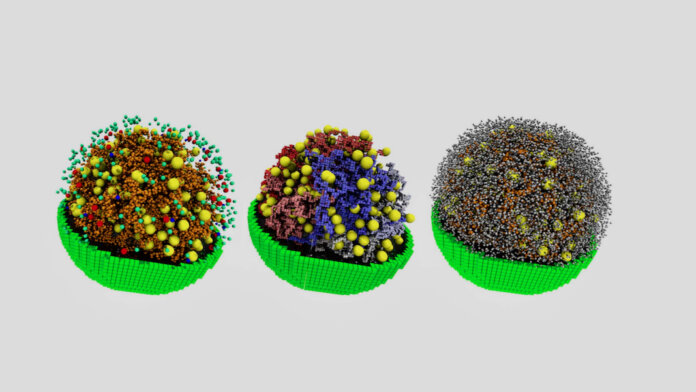 Scientists have long made digital simulations of the universe on the grandest scales. Now they’re turning their attention to smaller systems—though those systems are no less grand.

The cells in our bodies are like their own pocket universes: A whirling mix of molecular alchemy that has proven too complex to digitize in detail. But thanks to advances in synthetic biology and computation, a group of researchers at the University of Illinois, J. Craig Venter Institute, and Dresden University of Technology say they’ve created the most complete digital replica of a cell yet.

The 3D simulation includes digital representations of everything from DNA and genes to mRNA, protein factories, and lipid membranes. Once complete, the scientists kickstarted their simulated cell and watched it grow from birth to its first division. They believe simulations like this will help scientists better pin down life’s foundational principles.

The work builds on prior breakthroughs in synthetic biology. In 2016, scientists announced they’d created a synthetic cell by stripping a bacterial genome to its bare essentials—just 473 genes—and then synthesizing this minimal genome and adding it to an empty cell host. Though this “minimal cell,” called JCV-syn3.0, occurred nowhere else in nature, it was still able to go about the business of living, but just barely.

Creating the simplest cells in existence helps scientists boil life down to its most basic requirements—it also makes for an excellent target for digital simulation.

The team behind the recent study updated JCV-syn3.0 by adding in a few genes to make it more robust. The new minimal cell, JCV-syn3A, has 493 genes. That’s more than its ancestor but still only half the genes in Mycoplasmas mycoides, the bacteria that gave rise to its genome, and an eighth the number of genes in E. Coli bacteria. Still, the researchers say the functions of 94 of those genes remain a mystery.

The driving motivation behind simulations of all stripes is to speed up and inspire physical experimentation. By simulating cells in detail, the team can run more experiments faster while also keeping track of every component in the cell. The hope is to learn the function of those 94 mystery genes and get a better grip on what makes life tick.

But first, you need a high-fidelity simulation that mirrors the real thing.

To make the digital cell, the team sliced up their minimal cell and imaged the slices to help them place the cell’s key components in 3D space. They used an analysis of the cell’s internal proteins and those that make up its membrane to determine the right proportions of each. All the ingredients in place, they coded in physical and chemical traits—a biochemical roadmap of interactions—including how the various components diffuse through the cell and the energy used throughout the cell’s life cycle.

The simulated cell models DNA, lipids, amino acids, gene transcription and translation, the cell’s protein factories—thousands of interactions. It’s the most complete such simulation yet.

The most important bit, however, was to test the simulation in action and compare the results to the behavior of real cells in the lab. “We built a computer model based on what we knew about the minimal cell, and then we ran simulations,” University of Illinois graduate student Zane Thornburg said. “And we checked to see if our simulated cell was behaving like the real thing.”

Much of the simulated cell’s behavior lined up with observations in the lab, and it’s already rounding out the team’s understanding of how the cell works as well as making predictions for how changes to its genome might play out.

The simulation, for example, gave the team insights into how the cell budgets its energy—it spends most of its energy transporting key nutrients across its membrane—and how long mRNA molecules persist before being broken down. In one case, the team tweaked the digital cell’s genome, adding back in two non-essential genes, and the model predicted the change would decrease the time between cell divisions by 13 percent. After running the same experiment on physical cells in the lab, the team found the time between divisions decreased by 12 percent. More experiments like this are in progress.

While the work shows promise, the simulated cell’s behavior didn’t always match the behavior of cells in the lab. Also, the simulation is, as yet, limited to biochemical reactions. A future version might add physics into the equation.

“To fully understand the cell, we need to sort of model all of the forces and interactions of every atom or molecule of the cell,” John Glass, a coauthor on the new study and synthetic biology group lead at the Venter Institute, told Quanta.

Still, it’s exciting to have such a complete model to play with. The team made it available to other researchers on GitHub and is already planning improvements.

“Our model opens a window on the inner workings of the cell, showing us how all of the components interact and change in response to internal and external cues,” said Zaida Luthey-Schulten, a University of Illinois chemistry professor and study lead. “This model—and other, more sophisticated models to come—will help us better understand the fundamental principles of life.”