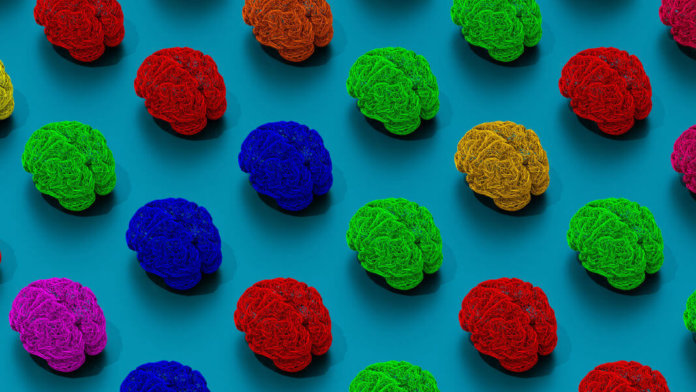 Our brains are unique snowflakes that change shape throughout our lives. Yet buried underneath individual differences is a common throughline, with the brain growing rapidly during childhood then slowly declining with age.

But that’s just a crude sketch of an average brain’s lifetime. What are we missing?

A team of international scientists just gave us the first answers with a remarkable project called BrainChart. In a tour de force study published last week in Nature, they combined almost 125,000 brain scans covering the entire human lifespan, from before birth to death. The youngest sample was 15 weeks after conception; the oldest, a centenarian.

Together, the data painted an animated picture of the brain’s journey over a human lifetime. In unprecedented detail, it captured how the “average” brain grows, matures, and declines with age, and compared the average process to the one in people struck by illnesses such as Alzheimer’s. Even more impressive, the study embraced—rather than smoothing out—individual differences. Instead of a single neat line depicting a brain’s growth trajectory, the results are more like multiple sketches in the same direction—each unique, but together forming a detailed sketch of brain development highlights.

“One of the things we’ve been able to do, through a very concerted global effort, is to stitch together data across the whole life span. It’s allowed us to measure the very early, rapid changes that are happening in the brain, and the long, slow decline as we age,” said Dr. Richard Bethlehem from the University of Cambridge, who co-led the study.

For now, the charts are mainly used for research, so individual teams can dig into the treasure trove to uncover minute changes at any age—for example, hunting for warning signs of autism, dementia, or other neurological troubles. The charts already have 165 different diagnostic labels as a first step to guide scientists along.

Even at this massive scale, the charts are just the first edition. The entire work is open sourced (you can check it out here), published with tools that allow other contributors to match up their brain scan data to the charts.

“You could imagine them being used to help evaluate patients screened for conditions such as Alzheimer’s, for example, allowing doctors to spot signs of neurodegeneration by comparing how rapidly a patient’s brain volume has changed compared to their peers,” said Bethlehem.

A Growth Chart For the Brain

Most of us remember this: standing with our backs against a wall while a parent marked our height.

It’s a classic, if low-tech, way of tracking a child’s growth. In the late eighteenth century, individual growth lines were consolidated into growth charts as a standard measure of a child’s developmental trajectory, with weight, height, and head circumference as key measures.

Technology has come a long way. Forget wrapping a measuring tape around the head. We now have powerful MRI (Magnetic Resonance Imaging) scanners to peek directly at the architecture of the brain. Brain maps are now a dime a dozen, from maps that link gene expression to brain structure, to nanoscale reconstructions that could help nudge AI towards more brain-like computations.

What’s been lacking is a growth chart of the brain’s anatomy that covers our entire lifespan.

Partnering up with Dr. Jakob Seidlitz at the University of Pennsylvania, the dynamic duo decided to pursue a nearly impossible project: BrainChart, a standardized open-source database of MRI brain scans across 100 years of our lifespan. Similar to a growth chart, BrainChart will serve as a reference to tackle disorders in brain development and aging.

“This should effectively allow the neurologist to answer the question ‘this area looks atypical but atypical by how much?’” explained Bethlehem.

Brain scans are tricky. Any given brain may look slightly different depending on the scanner hardware, the processing software, and a dozen other factors that make each image unique. Translation? They’re a nightmare to merge together, especially when dealing with hundreds of thousands of images. It’s like trying to photoshop similar photos together, but each was taken with a different camera, exposure settings, lighting conditions, and resolution. What’s real data and what’s noise?

The team first tapped into a software framework recommended by the World Health Organization (WHO) called GAMLSS. The framework helps guide data that aren’t linear—that is, data doesn’t always change the same with time, which is perfect for the brain’s growth trajectory.

Then comes the tricky business of consolidating brain scans. Pulling from roughly 100 studies, the team mapped the MRI data to four main landmarks in the brain. Some are classics, such as the total volume of grey matter—the body of neurons that’s a darker shade of grey on MRI scans—and white matter, their willowy branches. Like an app that uses facial features to mix together wildly different faces, these setpoints helped the team standardize all the data.

It took a jaw-dropping amount of supercomputing power at roughly two million hours of computing time. “This really wouldn’t have been possible without access to the High Performance Computing clusters at Cambridge,” said Seidlitz.

Some surprising trends immediately popped out. The amount of grey matter in the brain shot up in volume until people were roughly six years old, when it began dropping in a “near linear manner.” The peak is more than three years later than previously observed with smaller studies, the authors said. Grey matter in deeper parts of the brain, hubs for memory and emotions, expanded until roughly 15 years old before declining.

In contrast, white matter volume—the twisting branches that form neural networks—peaked when people were in their late 20s, with a precipitous decline at 50. Digging deeper, the team found a sharp change in how much grey matter compared to white matter a brain has between the first month of birth to around three years. It’s an inflection point that previous studies hadn’t found, the team said.

Jump to the Clinics?

Having set up a healthy reference brain throughout the lifetime, the team next mapped brain scans from people with brain disorders. Each match was given a score to show how close they were to the charts, with a higher score meaning more deviation from the typical brain development and aging trajectory.

Overall, Alzheimer’s disease showed the greatest difference. It’s not surprising—at later stages, the disorder eats away at neurons in parts of the brain that control memory. The difference was especially prominent in grey matter volume in female patients. Other clusters that deviated included schizophrenia and mood and anxiety disorders.

The matches were highly reliable. Across all lifespan stages, the score remained higher in people with brain disorders “irrespective of diagnostic category,” said the team.

That’s not to say BrainChart is ready for clinical use. Even with traditional growth charts, the authors explained, we need to consider important caveats and nuances when it comes to any individual child. With the complexity of the brain, size doesn’t necessarily always correlate with function, and “considerable further research will be required to validate the clinical diagnostic utility of brain charts.”

By releasing the dataset with corresponding software online, the team hopes to further build the project. For now, the data are from people of European heritage, which often casts a blind eye on other parts of the world.

“It’s a first pass at establishing a standardized reference chart for neuroimaging. That’s why we’ve built the website and created a large network of collaborators. We expect to consistently update the charts and build on these models as new data becomes available,” said Seidlitz.