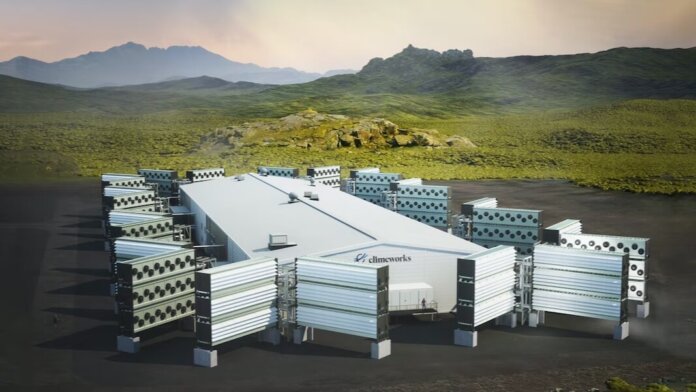 A little under a year ago, the world’s biggest direct air capture (DAC) plant got up and running in Iceland. Christened Orca after the Icelandic word for energy, the plant was built by Swiss company Climeworks in partnership with Icelandic carbon storage firm Carbfix. Orca can capture about 4,000 tons of carbon per year (for scale, that’s equal to the annual emissions of 790 cars).

Now Climeworks is building another facility that makes Orca seem tiny by comparison. The company broke ground on its Mammoth plant this week. With a CO₂ capture capacity of 36,000 tons per year, Mammoth will be almost 10 times larger than Orca.

While Orca has 8 collector containers each about the size and shape of a standard shipping container, Mammoth will have 80. The containers are blocks of fans and filters that suck in air and extract its CO2, which Carbfix mixes with water and injects underground, where a chemical reaction converts it to rock.

The vast amount of energy required for this process will come from Hellisheiði Power Station in south-western Iceland. Sitting on a lava plateau, the facility is the third-largest geothermal plant in the world, with an output of 303 megawatts of electricity and 400 megawatts of thermal energy.

DAC’s energy usage, particularly when it’s considered in conjunction with the (relatively minuscule) amount of CO2 it’s capturing, is its biggest drawback. Sourcing the energy from renewable sources helps, but it’s still not unlimited nor free.

Orca and Mammoth both employ solid DAC technology, which uses sorbent filters that chemically bind with CO2 (as opposed to liquid systems, which pass air through chemical solutions to remove the CO2). The filters need to be heated and placed under a vacuum to release and capture the concentrated CO2, which must then be compressed under extremely high pressure.

According to the International Energy Agency, there are 19 DAC plants operating worldwide today. They capture more than 0.01 megatons (10,000 tons) of carbon dioxide a year. Along with Mammoth, another plant that will reportedly capture one million metric tons per year of CO2 is slated to start construction in Texas by this December.

Climeworks was launched by Jan Wurzbacher and Christoph Gebald in 2009 out of ETH Zürich, the main technical university in Switzerland. Since then, Wurzbacher told CNBC, DAC technology has improved by leaps and bounds. “We started with milligrams of carbon dioxide captured from the air,” he said. “Then we went from milligrams to grams, from grams to kilograms to tons to 1,000 tons.” That sort of leveling up over the course of 13 years is no small feat.

To meet its future goals, though, the company will have its work cut out for it; they’re aiming to remove millions of tons of CO2 per year by 2030 and a billion per year by 2050.

Meanwhile, global emissions topped 36 billion tons last year. 36,000 tons (the quantity of CO2 that will be captured by the Mammoth facility) is a negligible fraction of that total. Is it even worth the energy usage, construction and maintenance costs, and frankly, the effort? Or would the geothermally-generated electricity go to better use powering electric cars?

There will be all sorts of trade-offs and tough decisions to make as we continue to grapple with the climate crisis. Even if automation and increases in energy efficiency drive down the cost of direct air capture, it’s unclear whether it will be a viable solution. Climeworks CEO Gebald is optimistic; “Nobody has ever built what we are building in DAC, and we are both humble and realistic that the most certain way to be successful is to run the technology in the real world as fast as possible,” he said. Construction of the Mammoth plant is expected to be complete in 18 to 24 months.