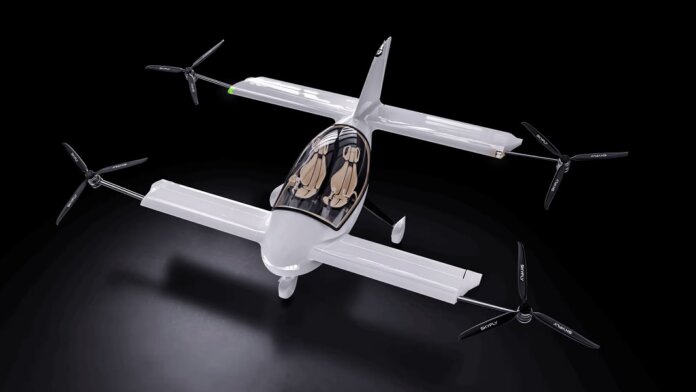 A Jetsons-inspired future where people zip around the skies in flying cars seems to still be a long way off, but that’s not stopping people from designing, launching, and even starting production of personal aircraft. Now London-based SkyFly is joining the fray; the company recently started taking pre-orders on a personal eVTOL it calls the Axe.

The Axe is different from other personal aircraft that’ve been in the news lately in a few significant ways. For starters, it seats two. The Zapata Jet Racer, Jetson One, and Ryse Recon are all made to carry just one passenger (who, of course, is also the pilot), so a flying vehicle for two is a departure from the norm.

Also unlike its peers, the Axe has a fixed-wing design, so it’s able to take off and land both vertically and in the conventional way (that is, picking up speed on a runway to help it achieve lift). For vertical takeoffs it has four propellers (each one almost four feet in diameter), and once airborne, the body tilts forward to gain speed. Eight 35-kilowatt electric engines power the plane, and they’re mounted at a 45-degree angle and don’t rotate.

The Axe’s wingspan is 16.4 feet, making it much larger than any of the other personal aircraft that have been unveiled in the last couple years. Skyfly is aiming for its customer base to be made up of people who are already licensed pilots and/or own their own aircraft, and those who want to become pilots. If a future of ubiquitous air taxis does indeed come to pass, we’re going to need pilots to fly those taxis; as Skyfly’s chief commercial officer Jaap Rademaker pointed out, “Because commercial air taxis will not be autonomous for a decade or so, they will require pilots, and those pilots will need to be trained to fly eVTOLs.”

Right now there’s not only a shortage of pilots for commercial aircraft, there’s not a cost-effective way to train new pilots either. But Skyfly CEO Michael Thompson wants the Axe to serve as a general aviation platform for pilots in training; assuming they’ll have experience operating fixed-wing or rotary aircraft, they’ll just need to learn one or the other. And he doesn’t seem to think it’ll be too hard; “Due to the advanced flight control systems, if you can fly a small consumer drone, like any of the DJI drones, I could teach you within one hour to controlled hover the Axe,” he said in a press release.

Skyfly is currently working on getting certification for the Axe from the UK’s Civil Aviation Authority; when approval is granted, the aircraft will be able to operate in most countries in Europe. The company is planning to start production in 2024.