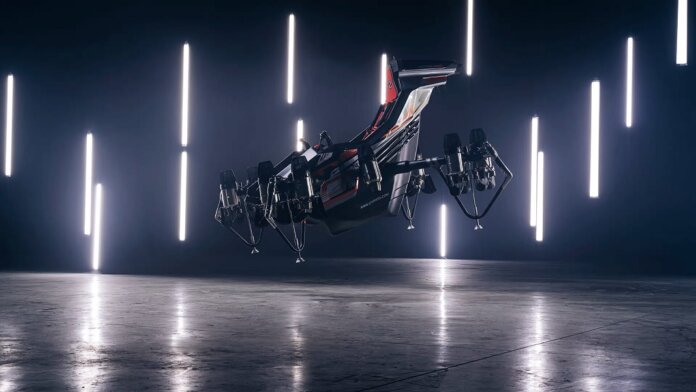 Another has joined their ranks, and while production is still a long way off, its “wow” factor and general futuristic vibes are high.

Exactly what to call it, though, is a tough one. The Zapata JetRacer definitely flies, but it can’t be called a car (because of its small size, lack of wheels, and open design). It takes off and lands vertically, but it’s not electric. A jet-engine-powered drone with a chair attached might be the most accurate description. But is a jet-engine-powered drone with a chair attached really something the world needs right now?

Its creator Franky Zapata thinks so, as do the thousands of people who are likely signing up to test drive the JetRacer.

The French inventor and adrenaline junkie is no newbie when it comes to daredevil stunts—or wild inventions. A world champion jet skier several times over, his first invention was the Flyboard, a sort of jetpack/hoverboard combo powered by gas turbines. Next came the Flyboard Air, a similar device powered by jet turbines. Three years ago Zapata crossed the English Channel on a Flyboard Air; the journey took just 22 minutes, with a stop halfway to refuel.

Zapata has employed the same “micro-turbo-jet engines” from his Flyboard on the JetRacer. Though they’re relatively small, the engines pack a punch, perhaps because there are 10 of them. The vehicle can reportedly reach speeds up to 250 kilometers per hour (that’s 155 miles per hour), and an altitude of 3,000 meters/9,800 feet. Its speed and maneuverability come at the expense of range, though, which the website says is “relatively short” without specifying distances.

The JetRacer can hold 200 kilograms/440 pounds of weight, and can be loaded up with cargo and flown via remote control. Zapata envisions it having military applications like reconnaissance or surveillance flights, and points out its ability to easily access steep terrain or boats.

In the spirit of saving the best for last, the JetRacer has one more feature worth mentioning: it can do 360-degree flips at the press of a button. Remember that wow factor mentioned earlier?

One questionable design choice on Zapata’s part is the lack of a protective structure over the passenger’s head and body; a similar vehicle called the Jetson One also lacks a closed cabin, but at least employs protective overhead bars that span the length of the vehicle (and its maximum speed is far slower than that of the JetRacer at 102 kilometers/63 miles per hour).

The JetRacer was just unveiled this month, and there’s no mention of a production schedule or a price. But volunteers can sign up for a lottery that will draw 100 names, and 25 of those will be selected for test flights in the US. You can bet there’ll be a lengthy waiver to sign, but my guess is that won’t stop people from crossing their fingers that their names get drawn.