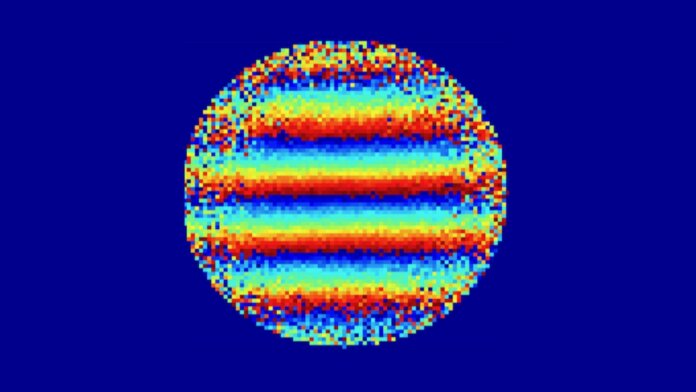 On the smallest  scales, our universe gets weird. Particles act like billiard balls or waves on water, depending how you probe them. Properties can’t be measured simultaneously or tend to smear uncertainly over a range of values. Human intuition fails us.

For much of the last century, all this weirdness was mostly the domain of physicists. But more recently, the theoretical and experimental have edged toward the practical. This trend is most visible in the growing menagerie of early quantum computers, but bizarre quantum behavior is useful for more than computation. Some scientists and engineers are building unhackable quantum communications networks; others have their eyes on sensors.

In a recent pre-print paper posted on the arXiv, a team at the French National Centre for Scientific Research describes a quantum accelerometer that uses lasers and ultra-cold rubidium atoms to measure movement in all three dimensions with extreme precision.

The work extends quantum accelerometers into the third dimension and could bring accurate navigation without GPS and reliable detection of valuable mineral deposits underfoot.

We already rely on accelerometers daily. Pick up a phone and the display lights up. Turn it on its side and the page you’re reading switches orientation. A tiny mechanical accelerometer—basically a mass attached to a spring-like mechanism—makes these actions possible (alongside other sensors, like gyroscopes). Whenever a phone moves through space, its accelerometer tracks that movement. This includes short spans of time when GPS drops out, like in tunnels or cell signal dead spots.

Useful as they are, mechanical accelerometers tend to drift out of whack. Left long enough, they’ll accumulate errors on the scale of kilometers. This isn’t critical for phones briefly out of touch with GPS, but it’s an issue when devices travel out of range for extended periods. And for industrial and military applications, precise positional tracking would be useful on submarines—which can’t access GPS underwater—or as back-up navigation on ships should they lose GPS.

Researchers have long been developing quantum accelerometers to improve the accuracy of positional tracking. Instead of measuring a mass compressing a spring, quantum accelerometers measure the wave-like properties of matter. The devices use lasers to slow and cool clouds of atoms. In this state, the atoms behave like waves of light, creating interference patterns as they move. More lasers induce and measure how these patterns change to track the device’s location through space.

Early on these devices, called atom interferometers, were a mess of wires and instruments sprawling across lab benches and could only measure one dimension. But as lasers and expertise have advanced, they’ve become smaller and tougher—and now they’ve gone 3D.

The new 3D quantum accelerometer, developed by the team in France, looks like a metal box about the length of a laptop computer. It uses lasers along all three spatial axes to manipulate and measure a cloud of rubidium atoms trapped in a small glass box and chilled nearly to absolute zero. Like earlier quantum accelerometers, these lasers induce ripples in the cloud of atoms and interpret the resulting interference patterns to measure motion.

To improve stability and bandwidth—requirements for use outside the lab—the new device combines readings from classical and quantum accelerometers in a feedback loop that leverages the strengths of both technologies.

Because the team can control the atoms with extreme precision, they can make similarly accurate measurements. To test the accelerometer, they attached it to a table rigged to shake and rotate and found the system was 50 times more accurate than classical, navigation-grade sensors. Over a span of hours, the device’s position as measured by a classical accelerometer was off by a kilometer; the quantum accelerometer nailed it to within 20 meters.

The accelerometer, which is still relatively big and heavy, won’t be ready for your iPhone soon. But made a bit smaller and more robust, the team says it could be installed on ships or submarines for precise navigation. Or it might find its way into the hands of field geologists hunting mineral deposits by measuring subtle changes in gravity.

Other groups are also working to miniaturize and toughen up quantum sensors for the field. A team at Sandia National Laboratory recently built a cold-atom interferometer—like the one used here—into a rugged package about the size of a shoe box. In a paper describing the work, the Sandia researchers say further miniaturization will likely be driven by advances in photonic chips. In the future, they say, the necessary optical components for a cold-atom interferometer like theirs might fit on a chip just eight millimeters to a side.

More quantum sensors, like gyroscopes, may join the party. Though they’ll also need a few rounds of shrinking and toughening up before escaping the lab.

For now, going 3D is a step forward.

“Measuring in three dimensions is a big deal, a necessary and excellent engineering step towards any practical use of quantum accelerometers,” Australian National University’s John Close recently told New Scientist.