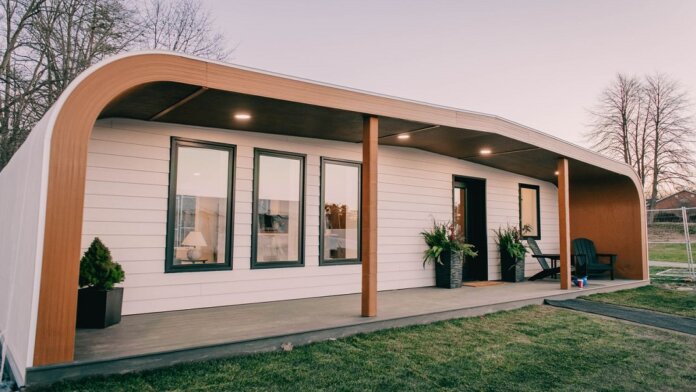 3D printing is taking off as a viable construction technology. The first several homes and buildings were all made of some sort of cement mixture (the exact composition of which varies by company), but now the list of materials that can be used as printer “ink” is growing. There’s clay, recycled plastic, regolith from the moon (this one hasn’t actually been used yet, but NASA’s working on it), and most recently, wood.

How do you 3D print a house out of wood if wood tends to come in plank or beam form (for building purposes, that is)? Well, this wood has been ground up into sawdust then mixed with reinforcing and binding agents to form a composite material that’s squishy enough to push through the hose of a 3D printer.

The material was used to build a 600-square-foot prototype house that’s now sitting on the University of Maine’s Orono campus. Called BioHome3D, the project was spearheaded by the University of Maine’s Advanced Structures and Composites Center (ASCC), funded by the US Department of Energy’s Hub and Spoke program, and included MaineHousing and the Maine Technology Institute as partners.

Unlike many 3D printed homes, which are printed on-site at their final location, BioHome3D was printed off-site in four separate modules, then moved to the university campus and assembled in half a day. Another feature that sets it apart from it predecessors is that all of it was 3D printed (well, except the windows and door).

“Unlike the existing technologies, the entire BioHome3D was printed, including the floors, walls, and roof,” said Habib Dagher, executive director of ASCC. “The biomaterials used are 100 percent recyclable, so our great-grandchildren can fully recycle BioHome3D.”

While the thought of a house being recyclable is reassuring from an eco-friendliness perspective, it’s less reassuring to wonder about its strength and durability. But Dagher and his team at ASCC have been researching engineered biomaterials for 20 years, and their work wasn’t for naught.

“The house that we built meets all building requirements, whether it’s structural, or fire or toxicity,” Dagher said. “These materials are new, but…we’ve learned a lot about what they can do and can’t do.”

They’ll learn even more over the next few years; the prototype house is decked out with sensors to monitor thermal, environmental, and structural data. How might the house hold up through a cold, snowy Maine winter? Conversely, how transferable is it to other climates? The ASCC team says they’ve sent samples of the printing material as far as Brazil, where its resistance to humidity will be tested.

In terms of the house itself, BioHome3D is much like any other small home or apartment; it has an open-concept kitchen, living, and dining area with grooved wooden walls, a bedroom that can double as an office, and a tiled bathroom. Once its modules were put together, it only took two hours and one electrician to get the power up and running.

Dagher and his team chose sawdust as the basis for their printing material because it’s organic, but more importantly, because their state has a surplus of it. Maine is heavily wooded and historically had a lot of sawmills and paper mills, but the paper mills have come upon hard times as paper documents transition to digital-only, and cheaper paper from other countries undercuts the remaining market.

The sawmills are still around, but they can no longer pass on as much of their residual sawdust and other byproducts to be made into paper. So why not make it into houses instead?

“In our region, there’s an estimated 1,000 tons of biomass residuals every year that’s being generated right now,” Dagher said. “We asked ourselves, could we print a home with that material?”

His team hopes to eventually build a manufacturing plant to produce many more BioHome3Ds, with the goal of churning out a whole house in just two days. They won’t limit themselves to their home state, either. “There’s a lot of potential not only to solve a crisis in Maine, but to assist in a solution to the housing crisis nationally as well,” Dagher said.