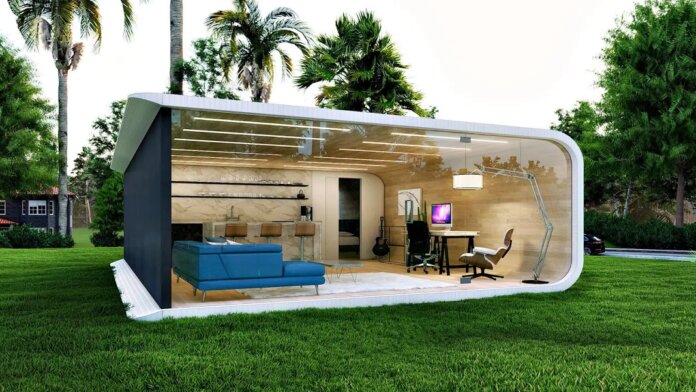 The US has a housing shortage problem. We also have a plastic waste problem. What if we could solve both these problems simultaneously with an unexpected two birds/one stone innovation? If you’ve ever longed to live in a small house made out of 100,000 recycled plastic water bottles, your lucky day is just around the corner.

If, like most of us, living in a water-bottle house isn’t on your list of life goals, but this still sounds like an intriguing idea, bear with me.

3D printed houses can’t quite be called “commonplace” yet, but they’re growing in popularity and springing up everywhere from New York to Virginia, California to Texas and in between. If putting down layers of cement wasn’t innovative enough, a company called Azure is making good use of the material that’s both a boon to our consumer society and the bane of our (and the planet’s) existence: plastic.

Azure’s 3D printed studios and accessory dwelling units (ADUs) have been available for preorder since August, and this fall the company was chosen by real estate development company Re-Inhabit to build 10 rentable homes in southern California.

“California, like many states, needs to find more innovative ways to speed up the time it takes to build,” said Re-Inhabit cofounders Rudy and Kim Dvorak in a press release. “Azure is doing something really special with their approach to the problem. Repurposing materials and 3D printing a complete structure in a fraction of the time is something that is a game changer for us.”

Azure’s process differs a bit from that of existing 3D printed concrete homes. Because concrete is much heavier than plastic, it makes the most sense to bring a giant 3D printer—most of which either move around the print area on rails or hang gantry-style from a frame—to the home’s location and build onsite. This adds cost and time, though, because the building company needs to move its construction equipment around and set it up all over again at each new home site.

Azure is taking a more centralized approach. They 3D print the floor, roof, and walls of their homes in their 10,000-square-foot factory in Culver City (outside LA). By the time a home leaves the factory, it’s 99 percent complete; it gets shipped to its site on a flatbed truck, and all that’s left to do is connect the modules to one another and to the foundation and utilities.

As for the printing portion, it only takes a day. Over 60 percent of the printing material is recycled plastic, which is combined with other materials to add strength and durability. Azure is currently using post-industrial plastic, but hopes to use post-consumer plastic in the near future. Either way, there’ll be plastic to spare; “Our supply chain should never be short in our lifetime,” Maguire told Business Insider. Not in the next lifetime, either.

On top of putting recycled plastic to good use, Azure is making the homes themselves environmentally friendly by incorporating solar panels and heat pumps. The company has reportedly already received over $16 million worth of pre-orders and has a waitlist three months long. Its lowest-priced offering is a 120-square-foot studio that costs $26,900, while its most expensive and largest home is a 900-square-foot two-bed that goes for $204,900 (these prices don’t include the land, foundation, delivery, or utility hookup costs).

Azure’s planning to start delivering studios by the end of this year, and will move on to accessory dwelling units and homes in 2023. Maguire has nothing but optimism about the future of 3D printing in construction. “3D printing is a more efficient way of building and it should only get better as we develop the processes, technology, and materials further,” he said. “I can only see it becoming more and more prominent in [construction] as we move forward.”