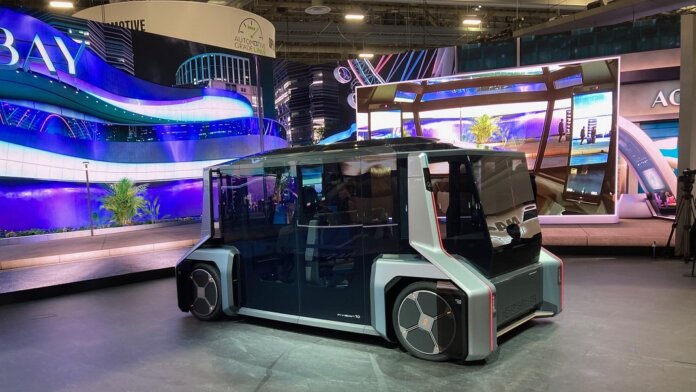 In the not-too-distant future, we’re going to need new ways to move. Cars are convenient and relatively affordable, but they’re also one of the world’s biggest sources of emissions, not to mention the traffic, noise, and accidents that come with them. So how might we get from point A to point B in more efficient, Earth-friendly ways?

There are plenty of options on display at this year’s Consumer Electronics Show (CES) in Las Vegas. From autonomous shuttles to personal aircraft to three-wheeled “autocycles,” it seems there’ll be no shortage of alternatives to the combustion-engine cars that fill our roads today. Which of these ends up being widely adopted and which fade into irrelevance will be revealed with time, but until then, it’s fun to contemplate a future where they all exist simultaneously.

Dutch startup Squad Mobility is showcasing its Squad car, which it describes as a compact city car that charges itself on solar energy through a solar panel on its roof. It’s not the first of its kind; there are at least three other companies working on solar-powered cars, including Aptera Motors, Sono Motors, and Lightyear. These cars run on batteries and can be plugged into an outlet to charge, but they can also charge with sunlight. But while the Aptera, Sion, and Lightyear 0 are truly cars, the Squad is closer to a golf cart due to its lower speed (28 miles per hour max). You don’t even need a driver’s license to operate it. Charged just on sun for a day, the car can drive up to 12 miles, and doesn’t require full sun to charge. The company says the car will be available in 2024 starting at $6,250.

The makers of this three-wheeled cross between a car and a motorcycle say it combines “the excitement of a tourer with the practicality of a daily commuter.” Classified as a motorcycle by the US Department of Transportation, the Autocycle is all-electric, can travel 250 miles on a single charge, and go from 0-60 in 6 seconds. With a maximum speed of 80 miles per hour, it’s slower than both cars and motorcycles, but that’s probably good since it has an open cab. The first prototype is on display at the show, and the company’s aiming to bring the Autocycle to market in 2024 (at a price as yet unspecified). The odds of ever seeing these on roads seem pretty low, but the concept is fun.

An entire 3D printed car may exist in the future, but for now it’s just one component that’s being made this way, and a crucial one: the chassis. Made by Canadian company Xaba, the 3D printed chassis is part of a zero-emissions concept car called Project Arrow. Xaba’s aiming to make manufacturing more sustainable using AI-driven control systems and automation. 3D printing auto parts could not only lower their cost, it could make it easier to incorporate sustainable or recycled materials.

If we’re being practical, the future of mobility should involve more sharing. The Holon looks like a nicer, more comfortable version of a city bus, with big windows and seats that face each other—and notably, no driver’s seat. Its maximum speed is 60 kilometers per hour (37 miles per hour) and can fit up to 15 passengers. Due to its slow speed and small size compared to a city bus, the Holon would most likely be used as a shuttle in places like college campuses or airports. It was designed by Italian car company Pininfarina, and Israeli autonomous driving tech company Mobileye is developing its self-driving system. Holon is scheduled to start production in the US in 2025.

This electric bike from Japanese company Icoma is still in the concept stage, but it’s a pretty cool concept, partly because it can function as a portable power station for your home. When you’re using it as a bike (which would be the case probably 99 percent of the time), its 600-watt motor can go up to 25 miles per hour for about 18 miles on a single charge. Once the battery’s spent it takes three hours to recharge, and it folds up to be even smaller than it already is. Its one big drawback, besides the fact that it’ll probably be pretty pricey, is its 110-pound weight; you won’t be storing this thing anywhere that requires going up or down a few stairs. The company wants to launch the Tatamel in the US this spring.

The Aska A5 Flying Car

Formally called an electric drive and fly vertical takeoff and landing (eVTOL) vehicle, the Aska A5 could also be called an aircraft you can drive on roads or a car that can take to the skies. Unlike most of the mobility solutions on display at CES, it’s not all-electric; rather, its power system has both lithium-ion battery packs and a gasoline engine that acts as an onboard range extender. These give the vehicle a 250-mile flight range carrying its maximum of four passengers. It can take off vertically like a helicopter, or from a runway like planes, and its wings fold in when it’s not flying. In drive mode, all four of its wheels are placed outside the fuselage for better traction and aerodynamics. The company is developing a ride-sharing service using the vehicles, and is targeting availability in major cities by 2026. That sounds like a long shot, but maybe one day this Jetsons-like dream will become reality.

Check back throughout the week, because CES is just getting started, and this list could very well grow to include even more wheeled and winged futuristic modes of transportation.