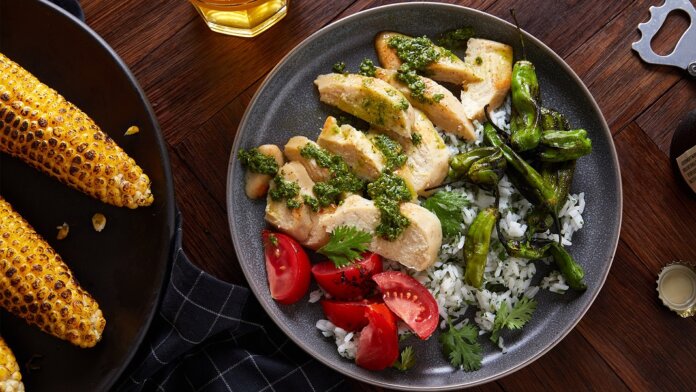 In 2020, California-based Good Meat became the first company in the world to start selling lab-grown meat. Its cultured chicken has been on the market in Singapore since then, and though it’s still awaiting FDA approval to sell its products in the US, this week the company reached another milestone when it received approval to sell serum-free meat in Singapore.

The approval was granted by the Singapore Food Agency, and means Good Meat is allowed to use synthetic processes to create its products.

Cultured meat is grown from animal cells and is biologically the same as meat that comes from an animal. The process starts with harvesting muscle cells from an animal, then feeding those cells a mixture of nutrients and naturally-occurring growth factors (or, as Good Meat’s process specifies, amino acids, fats, and vitamins) so that they multiply, differentiate, then grow to form muscle tissue, in much the same way muscle grows inside animals’ bodies.

Usually, getting animal cells to duplicate requires serum. One of the more common is fetal bovine serum, which is made from the blood of fetuses extracted from cows during slaughter. It sounds a bit brutal even for the non-squeamish carnivore. Figuring out how to replicate the serum’s effects with synthetic ingredients has been one of the biggest hurdles to making cultured meat viable.

“Our research and development team worked diligently to replace serum with other nutrients that provide the same functionality, and their hard work over several years paid off,” said Andrew Noyes, head of communications at Good Meat’s parent company, Eat Just. The approval should allow for greater scalability, lower manufacturing costs, and a more sustainable product.

The company is in the process of building a demonstration plant in Singapore that will house a 6,000-liter bioreactor, which it says will be the largest in the industry to date and will have the capacity to make tens of thousands of pounds of meat per year.

The serum-free approval “complements the company’s work in Singapore to build and operate its bioreactor facility, where over 50 research scientists and engineers will develop innovative capabilities in the cultivated meat space such as media optimization, process development, and texturization of cultivated meat products,” said Damian Chan, executive vice president of the Singapore Economic Development Board.

It won’t be the only plant of its type. Israeli company Believer Meats opened a facility to produce lab-grown meat at scale in Israel in 2021, and last month started construction of a 200,000-square-foot factory in Wilson, North Carolina.

This past November a third player in the industry, Upside Foods, became the first company to receive a No Questions Letter from the FDA, essentially an approval saying its lab-grown chicken is safe for consumers to eat (though two additional approvals are still needed before the company can actually start selling the product).

The timing of the cultured meat industry’s advancement is convenient, though not coincidental; more consumers are becoming conscious of factory farming’s negative environmental impact, and they’re looking for eco-friendly alternatives. Cultured meat will allow them to eat real meat (as opposed to plant-based “meat”) with a far smaller environmental impact and no animals harmed to boot.

It remains to be seen whether scaling production will go as smoothly as Good Meat and its competitors are hoping, as well as how long it will take for the products to reach price parity with regular meat. But if the industry’s recent streak of clearing hurdles continues, lab-grown meat may soon be found in restaurants and on grocery shelves.