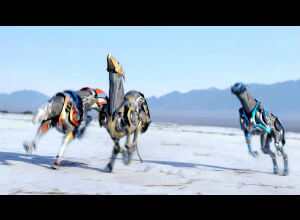 What do you get when you mix Lady Gaga-esque/Steampunk fashion, Thriller-inspired dance music, a futuristic interface for controlling racing robotic greyhounds, and heavy product placement for vodka? Just the latest work by Carl Erik Rinsch, a commercial director who has mastered the art of storytelling with strong images, minimal use of words, and immersive, engaging style.

As both a music video for Swedish House Mafia’s song Greyhound and an ad for Absolut Vodka, Rinsch’s latest work (the first bideo below) tells a simple story of spectators at a three-way race, but in a way that is visually stunning and engaging. Unlike many ads which make the product the main focus, Rinsch continues his success at creating a world in which the product seems to fit seamlessly and almost unnoticed.

According to his bio on RSA Films, Rinsch had his first film shown at film festivals when he was only 14 years old, then went on to become a photojournalist for Rolling Stone magazine. In 2010, he won the Cannes Lions Advertising Award for his piece, The Gift (second video below).

Currently, Rinsch is the director of the 18th-century samurai film 47 Ronin starring Keanu Reeves set to release next year. Due to his stylish handling of technology, the future, and storytelling, he was slated to direct the Aliens prequel, Prometheus (before it was taken over by Ridley Scott after pressure from Fox studio) as well as remakes of Creature From The Black Lagoon and Logan’s Run before dropping the projects. On a side note, it’s interesting that Aliens 3 was directed by David Fincher, another visionary director who made commercials and music videos before moving onto film (check out Fincher’s futuristic commercial for Coke), and like Rinsch, is part of the visual effects and animation company, Digital Domain, that was behind Virtual Tupac.

Though the director has produced a long list of commercials, mostly for the auto industry, the selection below captures his unique ability in telling a story and casting a vision of how technology and society will blend together in very short periods of time.

This is the second post in the Visions Of The Future series. If you missed part one, check it out to learn more about the webseries DR0NE here.