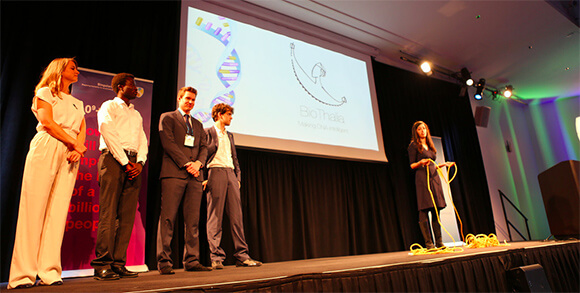 Singularity University, the Silicon Valley-based learning institution founded by Ray Kurzweil and Peter Diamandis, has reached its first major milestone: five years of cutting-edge programs that acclimate participants to the exponential changes in technology, inspiring them to forge viable solutions to the world’s greatest challenges. To celebrate all that has been accomplished over the last half-decade, SU hosted the Night of Impact, an event that concluded the 5th Anniversary Celebration during Alumni Weekend and ended Launch Week for the Graduate Studies Program (GSP).

Conceived in an organizing meeting back in September of 2008 but officially launched in a 2009 TED talk by Kurzweil, SU has quickly become a thriving, global community of thought leaders, entrepreneurs, and innovators from across a broad range of disciplines with over 1,300 alumni from dozens of programs. In his talk, Kurzweil stated that the goal of founding the organization was “to assemble the leaders, both teachers and students,  in these exponentially growing information technologies, and their application.” Over the years, some dramatic changes have taken place, such as converting from a non-profit organization into a benefit corp as well as acquiring both Singularity Hub and Singularity Summit last year. Still the focus, articulated in SU’s current mission statement, has remained the same: “To educate, inspire, and enable a new generation of leaders to leverage accelerating technologies to solve humanity’s grand challenges.”

Today, SU has a lot to be proud of.  Since 2009, SU has overseen 5 GSP classes, over 15 Executive Programs, 37 Global Impact Competitions in 25 countries, and custom programs in more than 15 countries, including an upcoming Summit Europe in Budapest that’s SU’s first program open to the public. Additionally, over 20 companies and initiatives have launched and recent exciting partnerships with Deloitte and UNICEF promise to increase the reach of SU’s impact. With the support of founding and corporate partners along with new sponsors, SU is poised for a strong, vibrant future.

I had the opportunity to attend the red-carpeted event, which kicked off with an expo of the team projects that emerged from the GSP participants and led into the evening presentation program. Capturing the same electric atmosphere as last year, the expo was full of wonder and excitement about each of the startups as each team tried to download their proposals to the crowd gathered in front of their booths. These projects are the culmination of the 10-week marathon of lectures, site visits, and group activities that challenge participants into new, global ways of thinking about technology and impact. The passion and professionalism that participants conveyed for their ideas carried the torch of the four GSP classes before them, even as some of those alumni walked through the crowd.

The 18 proposals were intriguing and inspiring, but only four were chosen by committee to take the stage to present their projects in greater detail and depth, all of which  turned out to be health-related biotech projects: BioThalia, MirOculus, BluBox, and Micromeds. These teams were selected to present on the basis of five criteria: 10^9 impact, technical feasibility, market viability, identification of real-world risk factors, and presenting with compelling communication. A fifth team, Puentek, was selected by the GSP13 class to present to reflect their committment to social need. Puentek aims to deliver a mobile innovation lab to expose at-risk youth to innovation and technology using a converted bus that was parked out front of the Computer History Museum where the event was held. Finally, GSP13 class representative Adam Little gave a humorous and lively fictional letter exchange between him and his mother that was both telling and touching, capturing the personal transformation that had occurred during the 10-week journey.

If you’re interested in learning more about the individual team project presentations, check out Singularity Hub’s overview story of all the teams or you can watch the videos of the team projects at the designated SU website.

The Night Of Impact proceeded with dinner in the main hall and was followed by the launch of a SU’s new international award, the Global Grand Challenge Impact Award. In the words of Nicholas Haan, the Director of Global Grand Challenges, this award aims to “honor people throughout the world who make outstanding contributions to addressing humanity’s biggest problems using accelerating or disruptive technology.” For the inaugural award, a single individual was selected whose achievements have touched upon a slew of the global grand challenges (energy, water, environment, food, security, poverty, health, and education) and that person is Dean Kamen, who wasn’t able to be in attendance, but recorded a video at his home in recognition of the honor.

The evening proceeded with Salim Ismail, Global Ambassador and Founding Executive Director, honoring all those who’ve helped SU over the years, including the staff who work behind the scenes to make each of the SU programs a success. The keynote speaker for the event was Larry Brilliant, CEO of the Skoll Global Treats Fund and former Google VP and Executive Director of Google.org. In true GSP-like style, the address was a fireside-like discussion with Peter Diamandis in which they assessed the state of the world, the power of innovation, and the hope that the world’s challenges can be solved by those motivated to work at it. 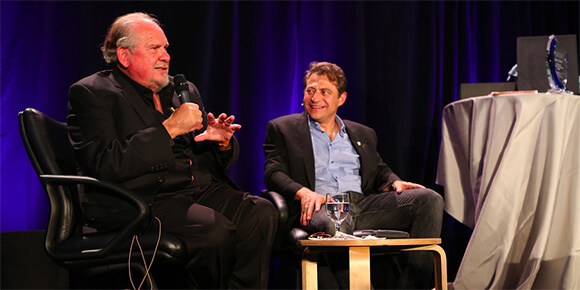 Overall, the event captured the heart of the growing community associated with Singularity University: nothing short of changing the world for the better. Celebrating this milestone in true SU fashion meant looking forward at all the work yet to be done more so than looking back at what has been accomplished. After all, this is a future-focused community that prides itself on understanding the trends of emergent technologies and the growing challenges humans face in a changing world.

For many who are part of the SU community, it’s clear that things are just getting started. With more programs, a larger staff, broader reach, and more resources for to launch startups, Singularity University appears to be on the cusp of rapid growth, and that means, the next five years will truly be exponential.

If you’re interested in becoming part of the SU community, look no further than the Singularity Hub Membership Program, which keeps you up-to-date on everything related to SU. We’re also actively connecting the membership program to the newly released Singularity University Network, a community site for alumni, staff, and others affiliated with SU, which will onboard tech and future enthusiasts everywhere into the greater SU community.

To learn more about SH membership and receive news about the forthcoming community site, check out the Membership Program today.