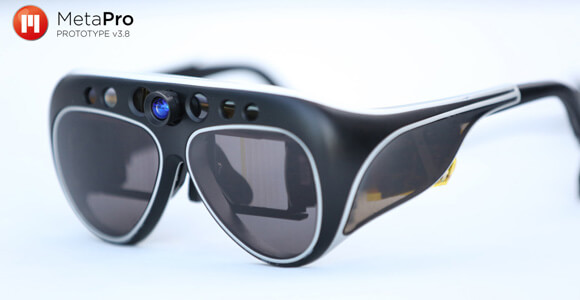 The wearable computing industry is a fascinating one. The spotlight found it before it was quite ready for its star turn, since the functionality users have come to expect still comes in a package a bit too big to wear on one’s face. But when Google began marketing the lightweight but minimally functional Glass, the computing giant forced others to come to market sooner than they otherwise might. Users get to watch as the industry chaotically defines itself.

Meta, a Silicon Valley startup with an Israeli Defense Forces veteran at the helm, has opted to try to out-perform Glass in functionality, even if it means a significantly less lightweight product. The company recently opened pre-ordering for its first consumer product, Meta Pro glasses.

While the Pro is markedly more wearable than Meta’s boxy developer version, it consists of aviator-style glasses that look relatively cool but weigh nearly 4 times what Glass does; they connect through a wire worn down the user’s back to a pocket computer slightly bigger than an iPhone.

But Meta’s features go beyond what Glass delivers, even with a growing number of apps. The device’s field of view, with a 40-degree display area, is 15 times bigger than Glass’s and offers 3D and higher resolution (1280 x 720 pixels). The display lays atop the real world without obscuring it, like Oculus Rift does.

The user gestures in the air to control the device, whereas Glass users touch the eyeglass earpiece or speak. The accompanying computer offers 4 gigabytes of RAM and a 1.5GHz Intel i5 CPU. The battery lasts 4 – 8 hours.

The glasses also feature on a 9-axis motion-tracking unit, integrating accelerometer, gyroscope and compass, that sits in the brow piece of the glasses.

So what can the user do with an always-on hologram interface? Much of that will depend on the roughly 1,500 third-party developers who are set to receive the chunky prototype headset in early 2014.

But in one app the company demoed to press, the user can pinch a sun icon to turn a connected lamp on and off. In another, the user can create a 3D digital object and physically plop it in a 3D printer to print. The headset also displays the user’s smartphone interface, allowing him or her to use its apps through the Meta display.

CEO Meron Gribetz imagines that the glasses will ultimately display a menu of certain basic apps, but that other apps will become available based on other contextual clues. Walk into a kitchen, for example, and the icon for your cooking app will pop up.

One area where Meta isn’t competing with Google is price. Glass sells for $1,500, while Meta Pro costs just shy of twice that. It will ship in June.