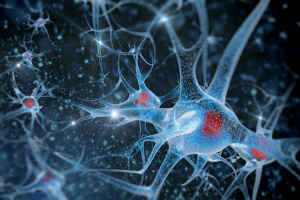 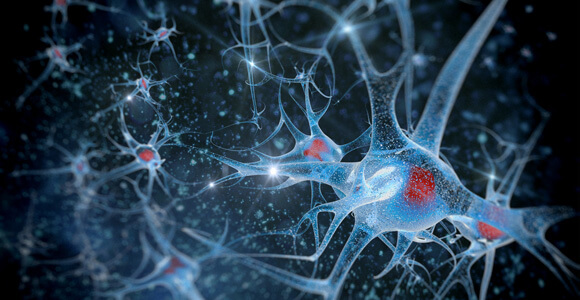 With improved visualization tools and souped-up computers to crunch the massive numbers involved in studying the 100 billion neurons in the human brain, many researchers, including the U.S. government, are trying to map the brain’s wiring, or “connectome.” Some researchers have dived right in to studying the massive human brain, but others see the mouse brain, with just 75 million neurons, as a more logical place to start.

A new atlas of study results related to the mouse connectome offers the equivalent of a highway map, with local roads to be filled in later. The atlas, described in a recent paper in Nature, represents more than four years of work undertaken at the Allen Institute for Brain Science, a private nonprofit funded by a grant by Microsoft co-founder Paul Allen.

It’s the most detailed information we have on the brain of any animal other than that of the roundworm C. elegans, which has just 302 neurons. 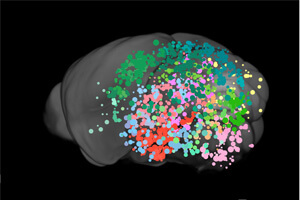 To follow the path of a neuron, Zeng and her colleagues introduced and tracked fluorescent viruses with imaging technology that allowed for resolutions smaller than a micron. (Less than a year ago, a project offering 20-micron resolution was big news.) The standardized method allowed the researchers to pool work done on 1,700 individual mouse brains (injection sites pictured at right).

In the Nature paper, the researchers applied a computational model to the connection data to reveal which pathways were distinct and which integrated and how strong the connections were. They found that the strength of connections within the brain varies across five orders of magnitude, with a bulk of weak connections balanced by a few very strong ones.

For instance, in this video released with the study, the axons at each dot are displayed as overlapping circles color-coded by the region of the brain from which the axons come.

It’s hard to comprehend how, in this age of advanced science, experts don’t know more about how the brain works. But it has a vastly complex structure.

Even the metaphors scientists use to describe the complexity show how little we really know. Van Wedeen, who has published on the connectome, said the brain’s wiring doesn’t simply connect two endpoints; rather, it is a densely packed grid of neurons that constantly change to adapt to new demands. Sebastian Seung, a high-profile scientist working on the connectome, compared the brain to “a giant bowl of spaghetti, in which each strand has been replaced by a complex, branched noodle.”

Behind the hodge-podge of metaphors are a hodge-podge of study methods looking at different parts of the brain. Scientists hope the unified methodology debuted in the Nature paper will speed brain study by allowing results to be examined side by side.

But there’s a long way to go. David Anderson, a neural biologist at the California Institute of Technology, said the published work was like a map at the level of major interstate highways.

“Smaller road networks and their intersections with the interstates will be the next step, followed by maps of local streets in different municipalities. This information will provide a framework for what we ultimately want to understand: ‘traffic patterns’ of information flow in the brain during various activities,” he said.

Even the rough map of the relatively small mouse brain makes up more than 1.8 petabytes of computer data. The data and browsing tools are available at www.brain-map.org. The human connectome, if and when it’s fully mapped, will likely constitute 98,000 petabytes of data.