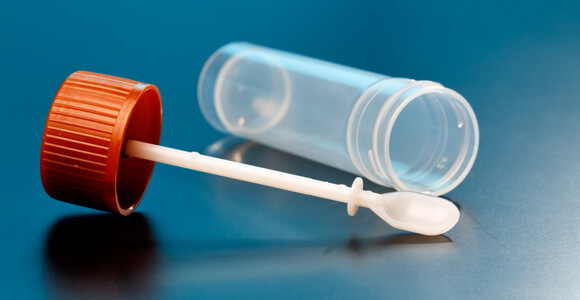 “The next-gen DNA sequencing is turning out to be a Swiss Army knife for all kinds of bio analysis,” Raymond McCauley, the head of Singularity University’s genetics track, joked recently.

As sequencing first emerged, its prohibitive price point and seeming promise to offer a single answer to a range of health issues made it an unlikely brute force tool. But as the price has continued to drop and improvements to sequencing methods have allowed researchers to identify DNA nearly everywhere, the method is turning out to be more of a versatile toolkit than a single magical cure-all.

In fact, DNA is so ubiquitous that people literally flush it down the toilet in the traces of intestinal lining and blood found in every stool sample. There’s also cell-free DNA in feces, particularly in those of people with colorectal cancer.

Colorectal cancer is the third most common cause of death in the United States and the second leading cause of cancer deaths, yet screening rates are low because the best screen, the colonoscopy, is invasive and requires the patient to fast and undergo sedation. In other words, this shit is serious.

A recent study published in The New England Journal of Medicine and an FDA committee hearing suggest that a stool test called Cologuard will likely be approved as a non-invasive screening for colorectal cancer. Based on the scientific findings, an FDA committee recommended that the agency approve the test.

The test, manufactured by Exact Sciences, found both cancers and pre-cancers more accurately than the FIT, the most common stool test now used to supplement colonoscopies, according to the study.

With no blood or painful probe required, the Cologuard test analyzes hemogloblin, multiple DNA methylation markers and mutations in the KRAS gene linked to colorectal cancer as well as the total amount of DNA in the stool sample in order to determine whether the patient has cancer or pre-malignant polyps.

An earlier version of the test, called ColoSure, looked only at methylation markers and had less persuasive results.

Blood has enjoyed a long reign as the diagnostic substance of choice, and existing tests for colorectal cancer screen blood in the stool. But while early cancers only bleed intermittently, DNA is shed continuously. With next-gen DNA amplification methods, trace amounts of the genetic material can be detected and sequenced. (Which isn’t good news for those who relieve themselves while committing a crime or simply neglect to pick up after Fido.)

The Exact Sciences test would augment, rather than replace, dreaded colonoscopies. Patients whose DNA results suggest there could be a problem go on to have colonoscopies, but those whose results are, err, clean, can wait longer before they undergo the invasive probe.

The test might not become the clinical standard overnight, however, because it offers modest gains over other methods without definitive cost savings, meaning that insurance companies may continue to push patients into existing screenings.

Nor is poop poised to dethrone blood as the dominant means of diagnosis, but it could get a little more respect. Micro RNA, another useful set of markers for cancer detection, is abundant in feces. And so is the DNA of the gut microbes that recent research has pointed to as a possible key to so much of what ails us.