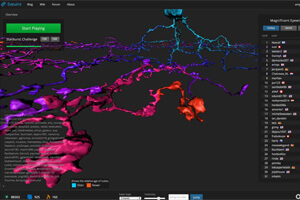 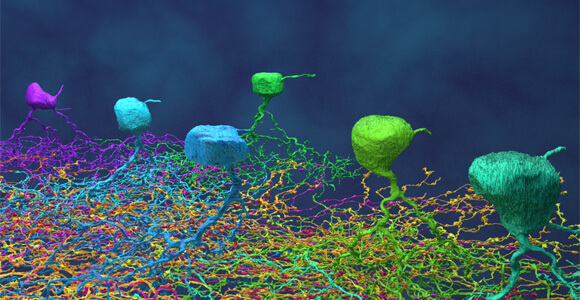 Crowd-sourced science isn’t just fun and games anymore; it has produced a scientific discovery new and important enough to be published in the journal Nature.

The social gaming venture EyeWire lured citizen scientists to follow retinal neurons across multiple two-dimensional photos with the chance to level up and outperform competitors. And with their help, EyeWire has solved a longstanding mystery about how mammals perceive motion.

“It’s fabulous to see the first results from EyeWire which add neuroscience for the first time to the list of subjects to which the distributed power of the crowd has made important contributions,” said Chris Lintott, an Oxford University astrophysicist and director of the Zooniverse.

Scientists have known since the mid-1960s that certain ganglion cells, the output neurons of the eye, are stimulated by movement in one direction but not the others. But they’ve never known how the process worked.

EyeWire, run by Sebastian Seung who literally wrote the book on neuron mapping, was able to use gamers’ maps to trace  the pathway of connected cells all the way through the retina, from the initial photoreceptor to the output ganglion. The new cartographers identified a time-delay — between bipolar cells and starburst amarcine cells — that determines the direction of a moving stimulus, triggering the relevant output neuron to send the information on to the brain.

At first the tedious work of tracking a single neuron through numerous microscope photographs may sound like a chore best delegated to a computer. But artificial intelligence isn’t well suited to parsing individual shapes out of a mass of visual stimuli. In EyeWire, artificial intelligence allows the players to color in chunks of a given neuron at a time. The setup also feeds human input back into the algorithms to teach them to better recognize neural pathways on their own.

It’s not so easy for a human user of EyeWire to tell what’s what in the gray slides. If you have been wondering why the brain’s wiring, or connectome, hasn’t already been mapped, playing EyeWire will quickly show you why.

But perhaps because it is challenging, it’s also fun. EyeWire counts 120,000 registered players from more than 100 countries, up 70 percent since last July. Most have no formal training in neuroscience.

The hardest type of neuron to follow is a starburst amacrine cell, so-named because the cells spread tiny tentacles in every direction. In the EyeWire game, which is played in a browser, only players who had proven their mettle had this cell type unlocked. 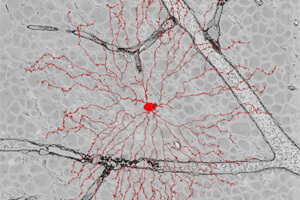 The anatomy of the starburst amacrine (shown at left) cells held the secret to how directional movement is flagged. One type of bipolar cell responds to visual stimuli more slowly and generally connects with starburst amacrine cell branches near the cell body; another responds about 50 milliseconds faster and prefers to grab information from branches far from the cell body. If the signals move outward from the cell body, they reach the bipolar cell at the same time, and activate it. If the signals start at the distant branches and move inward, they reach the bipolar cell at different times and, each, by itself, is too weak to trigger it. Thus a given ganglion will pass on information about one direction of movement and ignore another.

The finding showed the value of mapping projects, the researchers said.

“Common misunderstandings about connectomics are that the goal is to blindly draw the complete wiring diagram of the entire brain, or that the real research can start only after the connectome is complete. Neither is true. We are unveiling the mysteries of neural circuits little by little on our way towards the connectome,” said Jinseop Kim, a postdoctoral researcher at MIT who coauthored the study.

With the internet giving them a direct line to users with some spare time everywhere, many research projects have turned to social gaming to try to entice computer-users to use their urge for stimulation for good. Those who play the mobile game Element Alpha  help map mutations in cancerous tumors, for instance.

“And they say games are a waste of time,” quipped one of EyeWire’s top scorers.