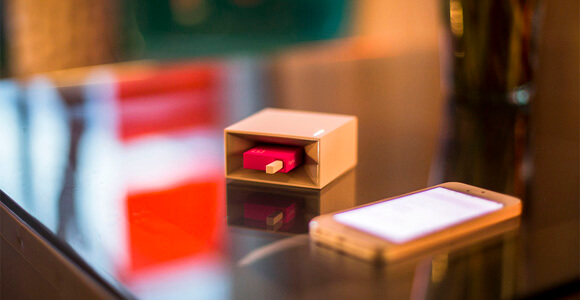 A number of trends are converging to encourage consumers to manage more of their health themselves and leave less of it up to a doctor. The cultural zeitgeist loves data, and mobile devices make it possible for us to track our personal data. Meanwhile, the cost of formal health care continues to rise, spurring people to find ways to avoid the doctor.

San Diego-based Cue is bringing DIY health care to new heights, with an at-home lab kit that runs five standard tests and displays the results in a mobile app. The at-home lab kit began pre-selling earlier this month and will ship about a year from now. The car stereo-sized reader and iPod-sized test cartridges cost $199 for early buyers and will retail for $300.

The user employs a nasal or mouth swab or a needle and places the “wand” into a cartridge — where it will be permanently sealed for safe disposal — and then inserts the cartridge into the reader. The lab tests inflammation via C-reactive protein, vitamin D levels, female fertility based on Luteinizing hormone, influenza virus, and testosterone levels. 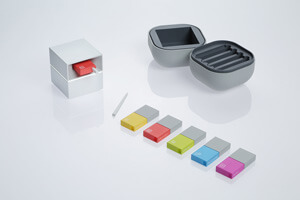 The app, which syncs via Bluetooth, tracks levels over time and makes connections between the results and the user’s activity and diet if he or she has recorded them. The app also includes social networking features, so if a member in a user’s narrow social circle tests positive for influenza, the user gets notified.

Miniaturized lab kits work by using microfluidic channels in sample cartridges to sort out and count particular molecules electronically. Microfluidic approaches mean there’s less blood required, and the lab machines can become much smaller and more automated. But Cue is, as far as we know, the first to put these tiny, tidy lab devices directly in the hands of consumers.

But how many people need near-daily lab tests? Are these the right tests? And do they measure overall health in the way Cue describes?

“What if you could hold the power of your health in your hands? You could recover from injuries faster, elevate your mood, and keep your immune system and bones strong by balancing your body,” the company promises in a promotional video.

Cue argues that the tests available at launch are among those most commonly ordered by doctors, making its product as useful as possible to as many consumers as possible. But the value of these lab tests performed on healthy people on a daily basis without medical supervision seems questionable.

For instance, C-reactive protein, while linked to inflammation, is used medically to assess the patient’s risk of heart disease, not overall wellness or recovery from workouts. And while vitamin D deficiency is a genuine medical problem, few doctors would recommend that patients get more sun to guard against it, when sun brings health risks of its own. (Sunscreen protects the skin, but can also prevent the body from boosting vitamin D production.) 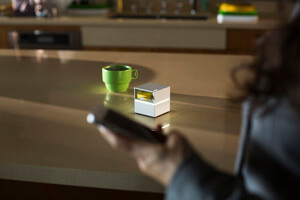 “Discover how exercise like sprinting and strength training can boost your natural testosterone levels, and receive recommendations to optimize your diet to amplify your performance both inside and outside the gym,” Cue promises. Dips in testosterone levels, while promoted by Big Pharma as an illness in need of treatment, are rarely a health concern on their own, and testosterone is not used medically as a proxy for physical fitness.

Using complex medical information in a consumer device is what got 23andMe in hot water with the FDA, eventually forcing the company to stop making health claims for its product. We suspect something similar will happen with Cue.

It sounds like Cue does, too. The device is available now under an investigational device exemption: Those who pre-order the device will be invited to participate in a study that the company hopes will be “an important part of Cue’s path to FDA clearance” the company says.

Even if it doesn’t prove its mettle scientifically, quantified self advocates and potentially those with autoimmune diseases in which inflammation plays a major role may choose to use the at-home lab, anyway.