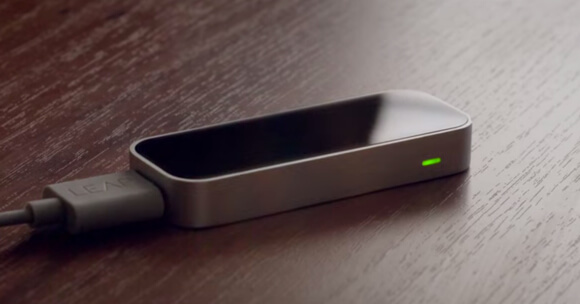 We first became acquainted with Leap Motion back in 2012. The company makes a small device about the size and shape of a pack of gum that uses infrared sensors and clever software to model objects inside its field of view—most obviously, these objects might be a pair of hands controlling a computer using gestures.

Though Leap’s early inspiration was to make 3D modeling more intuitive, comparisons to gesture-controlled sci-fi holographic displays led some to surmise the Leap controller could be an heir apparent to the touch screen and mouse.

It was, perhaps, a little too much hype for any startup to live up to out of the gate. After a round of unenthusiastic reviews and slow sales, they’ve had to reposition themselves for the longer haul. However, though Leap might be a little hung over from 2013’s euphoric highs, the firm is still here, and their device is still cool.

Like many emerging technologies that inflate our imagination of the possible early on, Leap may prove its worth less in ubiquity and more in specialized uses.

It’s in such niche applications that Leap may grow and mature its offering. And they know it. When I spoke with Leap’s executives last year, the conversation revolved around developers. They’ve got the hardware, but they need the developer community to figure out how to integrate it.

To that end, Leap and two of its financial backers (Founders Fund and SOS Ventures) created the AXLR8R program to support developers working on gesture-based products and keep the product fresh. At a recent a demo day in San Francisco, a group of AXLR8R  startups pitched ideas on how they plan to incorporate Leap.

One company, MotionSavvy, is working on a Leap-equipped tablet for the deaf. The tablet would read and model users’ hands and fingers as they communicate with sign language, and an app would translate their signs into speech. It would work in reverse too, translating speech to text.

Another offering, Cori, would augment voice-controlled systems like Siri with gesture-controls—the combination of the two could improve usability. For example, swipe in front of your tablet to hit snooze in the morning then tell it to turn up the lights. Or ask for the news then swipe through articles as you brush your teeth.

Ethereal pairs Photoshop with a Leap controller so users can paint onscreen with their fingers. Whereas we simply take brush to canvas in the real world, doing something similar on a computer requires all kinds of specialized tools and commands. Using our hands to interact with digital design programs might make them more intuitive.

GetVu is a headmounted augmented reality display (about the size of an Oculus Rift) that overlays virtual objects on the real world. It’s got a Leap controller embedded in the device allowing people to use their hands to interact with the display.

For example, the device might overlay an astronomy app on the night sky and when you point at stars or planets, it reveals interesting facts and figures. Or vice-versa, the device gives a tour of the sky, highlighting and explaining the objects in your field of view.

Another company, Drift Coast, wants to make minimally-invasive medical procedures easier. Such procedures snake a catheter through arteries instead of making direct incisions. But navigating tight turns in arteries can be awkward. Drift Coast is making a touchless interface for MRI-guided catheters using a Leap controller.

“Our ‘plug-and-play’ system can control the tip of the MARC catheter remotely to make difficult turns with a gentle movement of doctors’ hands, without touching anything.”

Mirror Training uses a Leap device to control a robotic arm. With enough precision, the company hopes such an interface might make bomb disposal robots easier to control. And we can imagine all kinds of mechanical equipment being directed by gesture in non-military environments too, like on a factory floor or in a construction zone.

Will all of these ideas go big? Probably not. But they show the variety of applications for touchless interfaces. And there are still undoubtedly more to come.

Leap Motion may not unseat the touch screen and mouse, but it very well might, along with other technologies (like voice control), be integrated into systems alongside them. There won’t be one way to control our computers in the future—rather, it’ll be a combination of a variety of tools from touch to touchless.