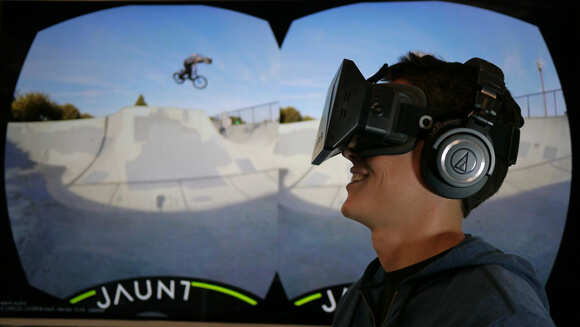 William Gibson famously said, “The future is already here – it’s just not evenly distributed.” I’m guessing Gibson was probably referring to the coming world of live action content for the Oculus Rift, and if that’s true he’s exactly right. The future is stuck in a Palo Alto office loft. JauntVR to be exact.

Forget the simulated world of virtual reality video games. The real VR disruption is coming from live action. Do you want courtside seats for the Lakers? Looking to get inside the White House press room? Have you been on stage with your favorite band lately? It’s not a matter of if, but of “HOLY CRAP it’s already here!!”

My journey began when I came across a press release describing some new type of cinematic VR platform, just recently out of stealth mode, who announced $6.8M in funding from a who’s-who in the film industry. Being fully committed that this will be a banner year for the industry, I reached out to the team.

To get a sense of what JauntVR has built, their technology is described as “an end-to-end solution for creating cinematic VR experiences.” Their camera films real world footage from everything surrounding it, and their software stitches those clips together to create a seamless experience. The wrap-around film capture means that you’re able to swivel in any direction to maintain that feeling of “actually being there.”

Rarely is the window into the future as stunningly clear as was for me for the next few minutes inside that Oculus Rift. So what was it like inside? (Keep in mind: writing about the mindshock of live action VR, is quite like trying to share a photograph of your favorite song. Words simply cannot do justice.)

I settled into a swivel chair at the center of a dark surround-sound equipped room, slid on the Rift, and instantly I was no longer in Palo Alto but sitting inches away from a string quartet performing inside a luxurious concert hall. Stunned by the realism (it is real after all!) I began turning in every direction, to discover that behind me I could see the full venue where an audience would sit. Then I understood where I was – right where the conductor would stand. Not a bad seat and with the surround sound so clear, I felt as if I was actually there.

It was the next demo, though, when my jaw finally hit floor. For copyright reasons, I can only say that I was closer to the sights and sounds of a professional sports event than at any time in my life. And this was real footage, not some simulation. Courtside seats in the home are coming much sooner than expected.

To bring it all home, the last bit of footage landed me onstage at an EDM concert next to a world-famous DJ pumping a record-breaking crowd of 300,000 into an adrenaline-fueled hysteria. And there I was, only feet away from the hero himself. Just a stunning experience you’ll have to see to believe.

So what does it all mean?

It means watching the next FIFA World Cup from the field with a better view than the coaches.

It means running with the bulls, worlds away from any angry bullhorns.

It means accepting that Oscar right alongside Leo DiCaprio, whenever it is he decides to win one.

It means keeping your pajamas on, because JauntVR is saving you a front row seat at anything they can get their cameras to. 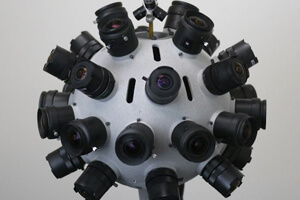 But as exciting as this sounds, live event ticket sales won’t vanish overnight. Events are a social affair, and live crowds will never and should never be replaced. Even at home, VR will remain (at least for the short term) a companionless substitute for watching with friends. And no pajama’ed soccer fan wants to tune into a World Cup to find empty stadiums. The challenge for events companies becomes inspiring fans to forgo the comforts of home for the in-person experience, and those comforts of home are relying on the fact that they can.

VR won’t replace the real thing, and could actually increase attendance for sports games and concerts. As Spotify and Pandora shifted the music industry to an information service (as VR now appears ready to do to sports/entertainment), fears were that it was dark days ahead for the industry. In reality, more people than ever are showing up to live shows. Billboard conservatively estimates that worldwide a whopping $15 billion is now spent annually on concerts.

What Spotify and Pandora really did was increase exposure for bands looking to add to their fan base. VR could do the same, as an entirely new and mouth-wateringly cool marketing platform, for sports teams seeking out fans in a globalized market. Teenagers far and wide will be tuning in courtside to hang with their favorite superstars.

Still, not everyone may survive the coming disruption. As experiences become an information service, VR could do to the “experience economy” what Netflix did to Blockbuster. Yet it’s unclear what consumer behaviors look like in a post VR-invaded world. As the most visited natural landmark on earth, would consumers favor a VR alternative to Niagara Falls? Surely businesses like the airlines and “Maid of the Mist” (a Niagara Falls boat ride company in business since 1864) should keep watchful eyes on these trends. Businesses in the “experience” industry ought to respect the vaporizing forces of digitization, otherwise risk ending up in the analog graveyard with Blockbuster.

Before the week, I would have never believed that today, someone could actually sit sideline at a professional game. I don’t think I’ve quite recovered from the haze of appreciation for that experience.

VR enthusiasts have been saying for years, “Won’t it be cool when…” Well that when is now, and that now is more amazing than this VR enthusiast could have imagined. Sooner than you think, your jaw too will tumble to the floor – inside the immersion of a live action VR experience.