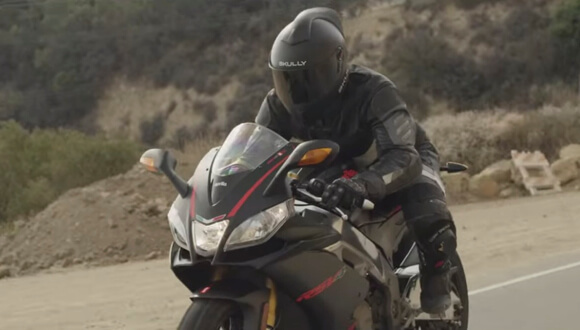 Sleek black (or white) with an aerodynamic fin. A visor that changes tint at the touch of a finger. A rear 180-degree camera surveying the road behind and beside the rider and streaming the video through a display in the front. Voice command? Of course.

Riders can check blind spots or get directions without turning their head or taking their eyes off the road. A connected smartphone sends incoming calls to the helmet’s earphones or makes outgoing calls by request. Tunes? Yes, of course. Just ask.

Skully looks like the future. But there’s nothing new or special about what the helmet can do. Pretty much everything on offer is old hat.

High-definition action video is owned by Go Pro. Navigation and directions showed up in cars a long, long time ago. Voice recognition is standard in Siri, Google Search, and other applications. Bluetooth helmets already connect to phones.

The novel, Iron Man-like feature is that Skully includes all this and ties it together with voice recognition and a head-up-display. If the design is right, it’ll be awesome.

And the Indiegogo community seems to agree. The campaign was fastest to reach a million in funding—and is set to go another 21 days. Of course, challenges remain. Undoubtedly, addressing safety concerns will be foremost on their to-do list.

Skully may develop into a must-have (regularly copied) motorcycle helmet. Or not. Never mind playing that game. Just take a moment to admire what’s on offer here.

The Iron Man helmet? Much of the tech to make it is already here. And some of the things that aren’t quite here, may be soon.

For example, big electronics firms have been gunning for flexible, ultra-thin, transparent displays. Why not make a motorcycle helmet where the entire visor is a curved, transparent OLED screen overlaying key information onto the road ahead?

Add a few head tracking sensors, like those used to make immersive digital worlds in the Oculus Rift, and a future helmet could make digital markers (directions or signs) look like a native part of the road or scenery—true augmented reality.

Tuttle went on to say that voice recognition accuracy had improved 30% in just 18 months—more than in the whole prior decade. Add that to machine learning efforts at Google or IBM or Facebook, and future digital assistants will not only understand what we’re saying, they’ll know what we mean and anticipate our needs.

Computer vision, too, is improving. On the back of sophisticated methods made feasible by the rapidly decreasing cost of computing power, this year’s Large Scale Visual Recognition Challenge witnessed a doubling in accuracy—the five-year-old contest has seen two such radical improvements, first in 2012 and now in 2014.

A motorcycle helmet that can look through a video camera and converse with the rider might see and note things the rider hasn’t noticed—a nearby animal, biker, or pedestrian; a traffic sign; a car in their blind spot; a green or red light.

All this technology might seem more distracting than helpful, but that’s only if the design isn’t dialed. If it works as it should, you’ll notice it less. But it won’t be that way right away. The early internet was a riot of pop-ups and distracting design. It still has its wild areas, but the overall experience has improved leaps and bounds.

We expect something similar will happen with wearable technologies—a little distracting early, but dialed in over the years. In the context of improving displays, sensors, and AI, Skully is a tantalizing hint at the powerful wearable interfaces yet to come.