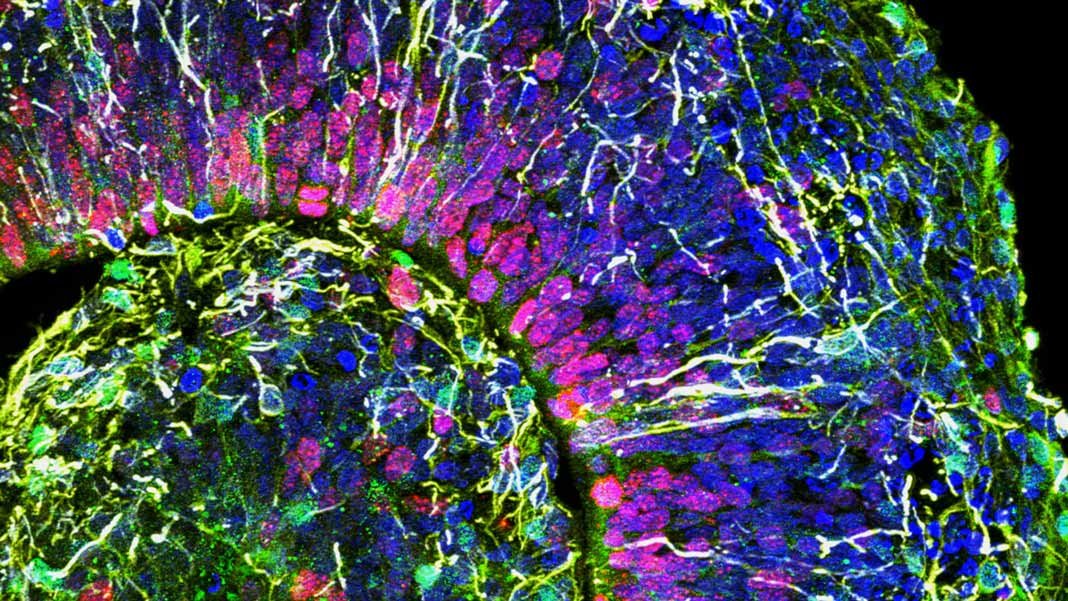 Neurons are a collective bunch. Although each neuron receives, processes, and passes on information individually, the electrical spikes only make sense when melded together in waves of oscillating activity. Like an orchestra, the notes played from each neuron matter. But only when they synchronize in specific ways do single notes transform into the music of thought, memories, and actions.

By studying animals, scientists have long known that even extremely young brains—say, those still in the mother’s womb—gradually generate neural oscillations as they mature. Genetic mutations that disrupt this synchronicity causes the melody to falter, leading to neurodevelopmental problems including autism, epilepsy, or schizophrenia. Yet those ideas remain educated guesses, mostly because it’s impossible to monitor a developing human fetus’s brain.

What if there’s a proven alternative?

This week, a collaboration between UCSD and Harvard found that alternative—and the implications swing widely between scientifically groundbreaking and utterly troubling. Their solution is minibrains, pea-sized organoids grown from embryonic stem cells or stem cells transformed from skin and other mature cells, called iPSCs. Brain organoids highly mimic a human fetal brain in its developmental trajectory, but as far as we can tell, they aren’t conscious or thinking.

The problem? The team showed, for the first time, that minibrains develop highly synchronized neural oscillations as they mature. They’re not random activity waves either. Using machine learning, the team compared those activity patterns to those measured from preterm babies as young as 24 weeks. Even though the measurements were different—one directly from minibrains, the other through the scalp with EEG—the two were shockingly similar in how network electrical activity emerged over time.

The team hopes that these organoids can eventually replace research on fetal brain tissue, which is far more ethically controversial. The more minibrains simulate our own inside the lab, the less we’ll have to rely on animal models to crack some of the brain’s most baffling disorders, said Dr. Alysson Muotri, who co-led the study with Dr. Bradley Voytek.

Make no mistake: the team did not grow human brains in a dish.

Although the minibrains resembled the cortex, the outermost area of the brain, they’re several times smaller than an average human brain even at a late fetal stage. “They are far from being functionally equivalent to a full cortex, even in a baby,” explained Muotri.

Nevertheless, the new study, published in Cell Stem Cell, should start giving people pause. The reason minibrains have won over the hearts of neurodevelopmental researchers is because of how much they resemble human fetal brains.

There are many recipes for cooking up these organoids, but most involve transforming skin cells back into stem cells, growing them out in a dish, and further maturing the little cellular balls inside a spinning bioreactor. Scientists are increasingly pushing how far the minibrains can mature—nine months, as in this study, is fairly reasonable—partly because they lack blood vessels to support growth. Without an internal blood supply, the inner core eventually withers and dies, which destroys the minibrain from the inside out.

Despite their limitations, hundreds of studies collectively show that minibrains are similar to second-term fetal brains in their genetic profile and cellular composition. Cerebral organoids, a specific type made to mimic the cortex, even begin to develop the laminated, multi-layer structure we see in our own brains. Neurons in minibrains form functional synapses, in that one activates another downstream partner. Some even spark with activity when exposed to light, mimicking a rudimentary retina.

Yet so far no one has convincingly proved that the electrical activity humming inside minibrains carries information—it could just be random bursts that don’t make sense. Then came a report from Japan just last month, which grew minibrains and then dissected the cells onto a dish to spontaneously form networks. To their utter shock, the team found signs that minibrain neurons can sync up their activity in a manner similar to how our neurons learn: fire together, wire together.

A Dance in Synchrony

To answer the question once and for all, the team grew cerebral organoids on top of 64 electrodes, each with multiple channels. While the minibrains gradually developed, the team could track their electrical activity, similar to hovering an EEG right outside your brain but inside the skull. They also brought in a slew of tools usually used to analyze mature oscillations to dig into the recordings.

Initial profiling confirmed that the minibrains captured basic components that lead to neural oscillations: excitatory and inhibitory neurons. Together, they make up a “dial” to keep the level of brain activity in check. But the dial isn’t locked in place, and turning it—for example, changing the relative activation levels of the two neuron types—tunes network activity.

Here’s the crazy part: as early as two months inside the dish, the minibrains began showing highly synchronous and stereotypical network activity in sporadic bursts, though they still enjoyed plenty of quiet time. By four months old, the bursts morphed into rhythmic activity, similar to undulating ocean waves. By six months old, and still smaller than a pea in size, the minibrains began showing an electrical signature that usually suggests functional communications in neural networks, with much reduced downtime in their activity.

No one has previously seen this level of electrical sophistication in whole, living minibrains. “We couldn’t believe it at first—we thought our electrodes were malfunctioning,” said Dr. Muotri.

To dig further into what those signals mean, the team turned to machine learning. An AI algorithm trained on EEG patterns from preterm babies between 24 to 36 weeks old was asked to correlate those brain waves to ones measured from the organoids. It’s not an apples-to-apples match: because EEG is gathered from the skull, it doesn’t completely reflect the brain’s activity patterns measured using electrodes placed immediately outside the tissue.

Yet the results were remarkably similar, and not just in the training data. To reduce false positives (something called over-fitting in machine learning lingo), the team trained and validated the algorithm using only EEG data. This “saved” their minibrain data from ever seeing the algorithm before testing. The conclusion? The AI detected strong network synchronicity in both datasets from preemies and minibrains—and they correlated so well that the algorithm trained to predict neonatal age using EEG could reliably predict the minibrains’ developmental timeline.

The team is ecstatic. Minibrains are a “viable neuroscience research model,” they said, especially for their “maturation of functional activity in brain networks during early neurodevelopment.” This offers a promising small-scale model of our cortex to examine brain disorders with roots in early development without an appropriate animal model. Millions of people could benefit.

What those oscillations mean remains a mystery, and the team isn’t eager to hypothesize. Unlike our brains, minibrains aren’t linked up to external sensors—ears, nose, eyes, skin—to bring in data, so whatever neural activity they’re generating likely reflects neurons organizing into an orchestra. Are they “hallucinating?” Your guess is as good as any.

What’s clear is that we’re increasingly inching closer to mimicking sophisticated and mature brains in a dish. It’s not to say minibrains are conscious—likely far from it, they’re a million times smaller than an adult brain. However, Muotri admits that we don’t yet have a fully defined way to measure sentience outside the body.

“There are some of my colleagues who say, ‘No, these things will never be conscious,’” said Muotri. “Now I’m not so sure.”