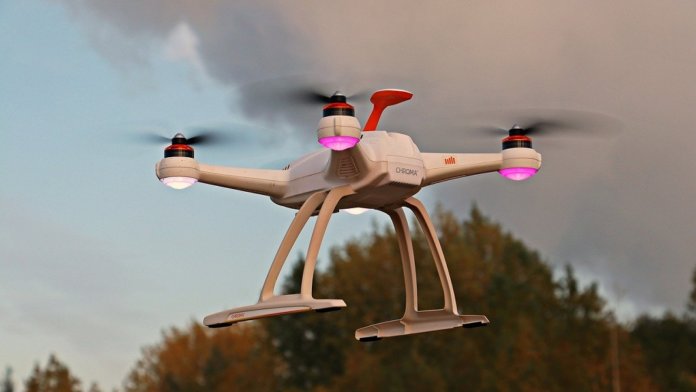 Drones haven’t made too many headlines over the past few months, but they came back with a vengeance this week and last, with all sorts of new uses being reported. Some have the potential to make a difference, some are just plain cool, and some are sort of pointless.

But they all come at a time when the US aviation industry is on the cusp of redefining the regulations that govern drones, which will eventually unleash a slew of even more (and likely even weirder) applications.

Here’s a few of the noteworthy (for better or worse) drone uses currently underway.

20,000 people in China are already infected with coronavirus, and the government is going to great lengths to try to curb its spread; a brand-new hospital especially for patients with the virus was built from the ground up in just two weeks.

Now, in a move that would make George Orwell proud, both cities and rural areas are deploying loudspeaker-equipped surveillance drones to identify people who aren’t wearing protective face masks—then scold them from above. “Don’t forget to wash your hands… Now a drone is watching you,” a loudly echoing voice admonishes an elderly woman.

Whether this is more funny, benign, or unsettling is up for debate; most Westerners would likely lean towards the latter. But in a country where facial recognition tech is used for law enforcement, ‘social credit scores’ can heavily influence citizens’ life trajectory, and the collective good trumps privacy, having a watchful drone hover over you and give you orders may not seem as reprehensible.

Drones are reportedly also being used to take peoples’ temperature, and may soon be spraying disinfectant in high-traffic public areas.

In 2017, consumer goods company Unilever launched a service called Ice Cream Now to—you guessed it—deliver ice cream. The company has now partnered with a division of Japanese Terra Drone Corp to get America’s favorite dessert from point A to point B even faster, with a pilot project underway in New York. The specially-outfitted drones can carry three ice cream cups.

Yuki Ueno, director of Terra Drone’s European arm, said in a press release, “We want to solve serious problems in the logistics field, such as carbon dioxide emissions, with drones. As deregulation progresses worldwide, drone delivery services will also increase.”

Making a Giant Screen in the Sky

Hungarian entertainment company CollMot puts on drone shows in which swarms of drones each carry a light and come together to form shapes and patterns in the sky. To get very detailed pictures, though, requires thousands of drones. So the company is trying something new: rather than each drone representing one pixel in a larger image, a swarm of smoke-generating drones comes together to form a huge ‘screen’ onto which laser light can then be projected. The result is 50-150 meter (164-492 feet) wide hologram-like displays in the sky.

According to Csilla Vitalyos, CollMot’s head of business development, the smoke screens can be made by anywhere from 10 drones to 50, and the big advantage this method has over ‘usual drone light shows’ (oh yeah, those…) is the ease of creating lines and curves.

The company has not yet revealed what Vitalyos called the technology’s “scope of application.” Besides its entertainment value, one potential use could be for emergency warning systems or delivering crucial information to a lot of people quickly.

Swarms of crop-gobbling locusts have descended on Kenya, and the government is scrambling for new solutions to fight the pests. Rwanda’s government used drones to spray insecticide over mosquito-breeding sites, and Kenya is eager to follow its neighbor’s lead.

Rwanda’s mosquito-fighting drones hold 10-liter tanks of insecticide, can fly for about 15 minutes on a single battery charge, and can spray an area of 40 hectares (98.8 acres) in a day. They’re focused on mosquito breeding sites in an attempt to eliminate the bugs’ larvae.

A lack of regulations governing drone use in Kenya is just one factor that may keep the country from deploying anti-locust drones. But Kush Gadhia, an executive at Kenya’s Astral Aviation’s Drone Solution, which is waiting for commercial drones to be approved in the country, believes they’re an optimal solution.

“A locust swarm travels up to 130 kilometers in a single day,” he said. “Locusts travel with the wind, thus it is possible to anticipate their arrival and take preventive measures to spray potential migration sites, which can only be done effectively using drones.”

The US Federal Aviation Administration (FAA) announced earlier this week that it’s soliciting input from the public and the drone industry on criteria for determining the safety of civilian and delivery drones.

Currently, individual and commercial users can fly their drones under heavy restrictions, which exist partly because of the lack of regulations governing how drones are designed and built. The new policy will let the FAA review drone designs the same way they review other aircraft, and the resulting rules will cover drones used by companies for package delivery. UPS, Amazon, and others are taking part in FAA-sanctioned test runs for drone delivery of consumer items.

Though there’s not a set timeline and it will likely be a few years before drones are regularly dropping off our packages, the proposed legislation is significant for the drone industry, opening it up to more commercial applications and perhaps even flying taxis.

As the examples mentioned above show, the sky’s the limit on weird and wacky ways to use drones. Given that we’ve come this far under restrictive legislation, looser laws will doubtless bring a slew of even weirder, wackier applications.