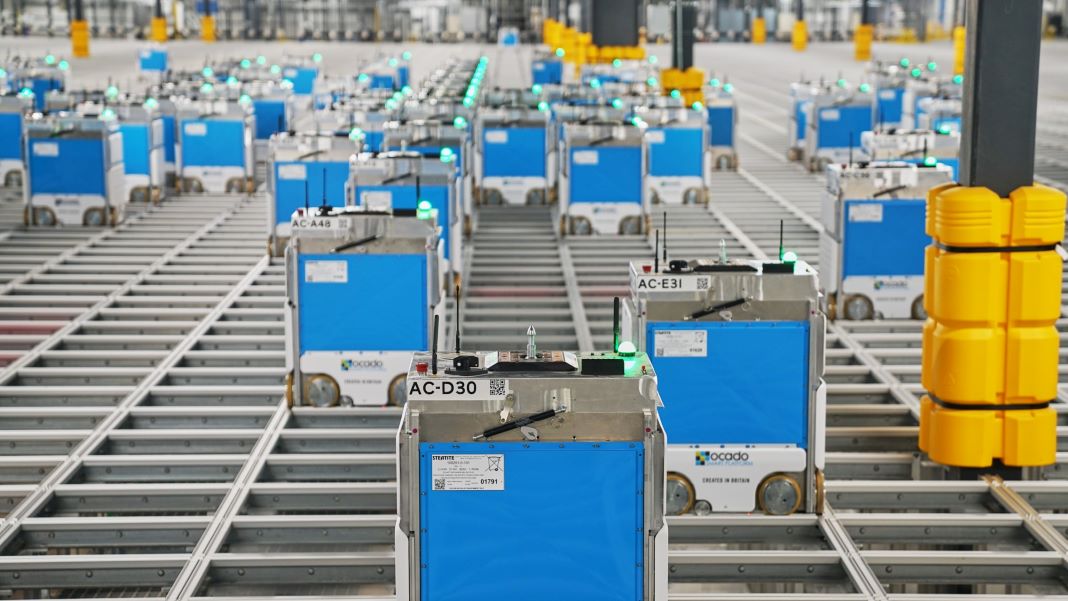 With the pandemic at long last starting to wind down, many of us are beyond eager to get back to “the way things used to be,” that is, being able to interact with other humans, spending time in public places, and getting some measure of joy out of life. But some of our habits may be permanently changed, like doing meetings over Zoom, working from home, and shopping online. One grocery store chain in particular is betting big on that last one—with no guarantee of a return on its investment.

Kroger has over 2,700 stores in 35 US states, and its annual sales total more than $121.1 billion, making it the biggest traditional grocery chain in the US and one of the world’s biggest retailers. But even before the pandemic, Kroger was falling behind competitors, some of whom already had robust online shopping programs in place before Covid hit. The retailer now seems to be making up for lost time (or rather, lost market share) by building massive automated warehouses where robots compile customers’ online grocery orders.

Construction on the first such warehouse is complete; a 375,000-square-foot fulfillment center outside the company’s headquarters in Cincinnati opened this week, and it will soon be followed by one outside Orlando, to the tune of around $50 million apiece. While they’ll rely on robots and automation, these warehouses will operate a little differently than, say, Amazon’s. But what’s not to love about a robot that looks like a dishwasher (and doesn’t wash any dishes)?

Here’s how they work. Around 28,000 different items are stacked in layers of crates three stories high. The robots move around on a grid (called “the hive”) at the top of these stacks. Each robot has a hollow space at its center and an arm that can reach down to grab individual items or entire crates (not unlike the new Boston Dynamics robot, Stretch, that uses suction to grab onto boxes). The robots can compile customer orders or move crates from one location to another. They can pick a 50-item order in less than 5 minutes with 99 percent accuracy—suffice it to say, a lot faster than a human.

Algorithms determine where items are positioned in the grid, with more commonly-ordered items near the top and rarely-purchased items near the bottom. Other algorithms help with packing, making sure fragile items go on top and bags are evenly weighted.

Is it the future yet?

At the Ohio facility, there’s a fleet of 400 temperature-controlled delivery trucks that can each hold 20 orders. The facility will also employ around 400 people in customer service, engineering, operations, inventory and quality management, and transportation jobs.

The technology for the warehouse, including the robots, the software that coordinates them, the grid system, and algorithms that decide where in the grid to place different items, comes from a British company called Ocado Group, an online-only grocery chain that also makes software and robots as part of its online grocery solutions business. The company has sold its automation technology to chains all over the world, including in Japan, France, Canada, and now the US.

Kroger’s massive investment into automation of online order fulfillment seems like a bit of a gamble. There will always be those of us—myself very much included—who love grocery shopping and will never let robots rob us of the pleasure of wandering the colorful aisles adding both familiar and novel items to our carts while dreaming of all the delicious meals we’re going to cook with them.

But of course there are many who prefer (somewhat inexplicably, if you ask me) to spend their time doing other things. With the risks of Covid eliminated, or at least drastically decreased, one would imagine most shoppers will return to stores in person. But not all of them will—and even if they do for now, automation is less a temporary trend than a slow but steady shift in the way businesses run; for better or worse, robots will continue to take over repetitive manual jobs, and companies will continue to automate more segments of their operations to drive down costs.

Admittedly, spending on groceries is expected to drop this year as people go back to eating in restaurants. But even if it takes eight years for Kroger to recoup the investment it’s making in automated warehouses, as one Credit Suisse analyst predicts, it’s likely on the right track for the longer-term future.