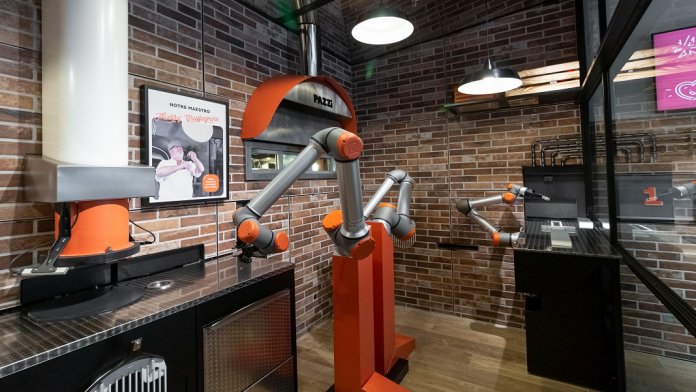 Four years ago in Mountain View, California, a team of robots was cranking out pizzas on a production line that was almost fully automated. The first robot pressed a ball of dough into a flat circle, a second squirted tomato sauce onto it, and a third spread the sauce over the whole crust. Then a human stepped in to add the toppings, but a fourth robot put the pizzas in the oven and a fifth sliced them up when they were done.

That operation, called Zume Pizza, has since discontinued its pizza-making operations and shifted its focus to systems for food packaging, production, and delivery. But the idea of robots taking over repetitive food preparation work has only gained traction, especially in light of the Covid-19 pandemic. A restaurant in Paris has taken Zume’s idea to a whole new level of automation, with robots in charge from start to finish.

At Pazzi Pizzeria—or, as the owners are calling it, Pazziria—customers place their orders on screens at self-service terminals, then they can watch a team of robots working in concert to deliver up their pizza. In fact, the spectacle seems as important as the food; a sign outside the restaurant encourages passerby to “Come for the show, stay for the pizza.”

The “show” starts with a robot grabbing a handful of dough and depositing it on a pan, where another bot flattens it, a third applies tomato sauce, etc. From dough-grabbing to inserting in the oven, preparing a pizza takes just 45 seconds. The oven can bake 6 pizzas at a time, yielding about 80 pizzas per hour. Once a pizza is baked to gooey perfection, a robot slices it and places it in a box, and it’s then transferred (by a robot, of course) to a numbered cubby from which the customer can retrieve it.

It’s a shame the pizzeria didn’t open during the height of the pandemic, as its revenues likely would have gone through the roof given that there’s zero person-to-person contact required for you to get a fresh, custom-made pizza in your hands (and more importantly, your belly!).

Pazzi’s creators spent eight years researching and developing the pizza bots, and they say the hardest part was getting the bots to work effectively with the raw dough. Since it’s made with yeast, the dough is sensitive to changes in temperature, humidity, and other factors, and for optimal results it needs to be rolled out and baked with very precise timing.

“It’s a very fast process, the timing is perfectly controlled, and quality is assured because the robots are consistent,” said Pazzi co-founder Sebastien Roverso. He added that engineers monitor the bots remotely, and if needed they can take control of them and fix any issues.

Despite the savings on employee training and labor that the robots bring to Pazzi, its prices are about on par with what you’d expect from a traditional counter-service “fast casual” restaurant, ranging from 7 to 14 euros for a pizza that feeds 1 to 2 people.

Pazzi’s Paris restaurant opened last week, and the company plans to expand internationally, starting with Switzerland next year. As the company’s website explains, “Pazzi” isn’t just a rearrangement of the word “pizza”; it’s also the plural of the Italian noun pazzo, which translates as “crazy,” and can be used to refer to people “supporting or building an audacious project.”

Pazziria may have seemed a bit crazy when the idea was first conceived of years ago, but now it’s seeming downright logical. Restaurants are experiencing a massive staffing shortage post-pandemic, with many of the workers who were laid off, quit, or were furloughed showing little interest in returning to their jobs, often because they’ve moved to new geographic locations.

Thus, just as the pandemic accelerated other tech trends—including automation, e-commerce, and remote work—it seems likely to give robotic food service a forward push. Whether this will fill much-needed gaps in the labor market or end up displacing workers who need jobs remains to be seen, but my guess is that Pazzi will soon have plenty of competition for robot-run restaurants. The biggest outstanding question is, how’s the pizza?