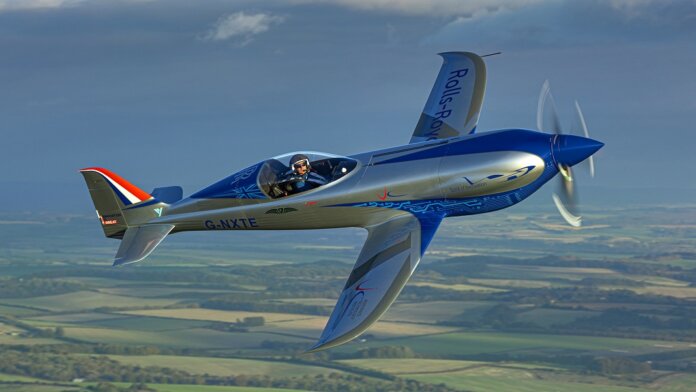 The first electric plane took flight in 1973. There was just one person on board and the plane only stayed in the air for 14 minutes, but it was the beginning of an ongoing effort to power aircraft with batteries instead of fuel. Multiple companies are working on building faster, lighter, more efficient electric planes, as well as batteries to power those planes—and last week an aircraft made by Rolls-Royce hit some new milestones in the industry.

Cheerily dubbed the Spirit of Innovation, the plane is part of the company’s Accelerating the Electrification of Flight initiative. The seemingly precocious plane just completed its maiden flight a little over a month ago, and Rolls-Royce subsequently launched “an intense flight testing phase” to collect data on the performance of the aircraft’s power and propulsion system, a 400kW electric powertrain they call “the most power-dense propulsion battery pack ever assembled in aerospace.”

Last week, the company said in a press release, they set three new world records. First, the aircraft reached a top speed of 345.4 mph (555.9 km/h) over 1.8 miles (3 kilometers). That’s 132 mph (213 k/h) faster than the existing record. The Spirit of Innovation got up to an altitude of 9,842.5 feet (3,000 meters) in 202 seconds—60 seconds faster than the existing record. And finally, the plane reached a maximum speed of 387.4 mph (623 km/h) during its flight tests, which Rolls-Royce says makes it the world’s fastest all-electric vehicle. The company is waiting on the Federal Aviation Institute to confirm and certify these claims.

Whether or not they turn out to be world records, though, it’s debatable how big of a step toward commercial electric flight these achievements would be. Speed is important, of course—but the larger problem to solve is distance, or perhaps a better word is duration. Electric planes can’t currently travel nearly as far or carry nearly as much weight as those that run on jet fuel. When will batteries be able to store enough energy for a plane to fly across the Atlantic carrying 200 people?

Jet fuel is far more energy-dense than even the most advanced batteries. In other words, the batteries to provide a given amount of energy will be much heavier than fuel that would provide that same amount—and the weight of an aircraft’s fuel is a major factor in its range. Currently, fuel accounts for about 45 percent of the total weight of a typical long-haul jet.

As Richard Anderson, who runs the Flight Research Center at Embry-Riddle Aeronautical University, put it, “Cars need batteries to be affordable and compact, but with airplanes we don’t care about cost as much, or even volume. It’s weight that’s critical.”

Don Hillebrand, director of the Argonne Center for Transportation Research, believes batteries need to hit 1,000 watt hours per kilogram for short-haul electric flight to be feasible. Today’s lithium-ion batteries go up to around 265 Wh/kg, so we’re looking at a four-fold improvement over our best existing technology. Last year, a British company called Oxis Energy unveiled a prototype lithium-sulfur pouch cell capable of 470 Wh/kg, and they’re aiming to reach 600 Wh/kg by 2025.

Nonetheless, it seems electric flight—short-haul or any other type—is still at least a decade away, if not more. Norway has set a target for all of its short-haul flights (those lasting an hour and a half or less) to be fully electric by 2040; it’s an ambitious goal given that we don’t know how quickly battery technology will progress, or how other factors will impact the adoption of electric flight. Not to mention, the whole conversation around electric flight is only relevant if the energy being used to power the planes is coming from renewable sources.