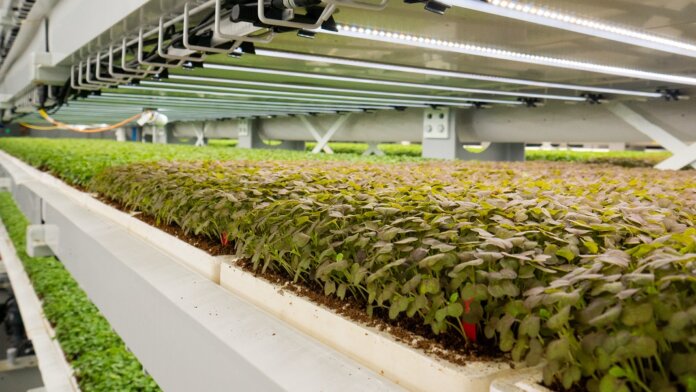 Four and a half years ago I visited a vertical farming research facility in the Netherlands to learn the basics about growing food indoors without sun or soil. Since then, new vertical farms have sprung up from Asia to Europe and the US, with the technology’s uber-local and eco-friendly aspects taking on increased significance as urgency grows around the climate crisis. A new facility announced this week will be the largest vertical farm yet, and will sprout local greens for the most populous market in the US: New York City.

The company behind the project is Brooklyn-based Upward Farms, which was founded in 2013 and currently sells greens from its two existing farms in Manhattan and Brooklyn Whole Foods stores. The new farm will be built in Luzerne County, Pennsylvania, which is 135 miles west of Manhattan and 115 miles north of Philadelphia.

At 250,000 square feet (that’s about 6 acres) the Pennsylvania facility will dwarf the company’s existing farms, as well as most vertical farms in other parts of the world; Europe’s biggest one is less than a third of this size at 73,000 square feet.

As a quick refresher, vertical farms use LED lights to recreate the process of photosynthesis; red and blue wavelengths of light interact with the chlorophyll in plants to help form glucose and cellulose, the structural material in cell walls. The elements of sunlight that plants don’t use as efficiently, like heat, can be reduced or removed entirely, making for a quicker progression from seed to harvest.

Most vertical farms are hydroponic (plant roots sit in shallow troughs of nutrient-rich water) or aeroponic (roots dangle in the air and are periodically misted). But Upward Farms uses aquaponics to grow and fertilize its crops.

Besides microgreens, Upward Farms raises fish: mercury-free, antibiotic-free, hormone-free hybrid striped bass, in tanks that are separate from the trays of greens. They cultivate soil-building microbes that convert nutrients from the fish into organic fertilizer for the plants. This makes for a soil microbiome that’s more dense, fertile, and productive than that of most indoor farms, according to the company (and they sell the fish to consumers, too!).

Upward Farms claims its yields are two times above the industry average thanks to its ecological farming method, which keeps the microbial cell count in soil much higher than it would be with chemical fertilizers. “There’s a communication layer that’s been built in by millions of years of evolution between plants and microbes,” said Jason Green, Upward Farms’ CEO and cofounder. “Plants can say, ‘Hey, I’m stressed in this way, my environment is imperfect in this way, can you help me?’ and plants recruit microbes to their service.”

Consumers in the West have gotten used to having access to almost any fruit or vegetable we want at any time of year. Out-of-season produce costs us just a little more, but the logistics involved in shipping fresh foods hundreds or thousands of miles are no small endeavor. From keeping fruits or veggies cold and pest-free to making sure they arrive unblemished to using chemicals to keep them fresh, this process strains both the environment and the food products.

The hope with vertical farms is that they’ll flip this paradigm on its head by growing food near major markets, minimizing or eliminating the complicated supply chain issues that drive up costs and make for outsized environmental footprints. “With this new facility, we’ll be able to reach some of the most populous areas of the US, and nearly 100 million Americans, within a single day of distribution versus the week it can take to receive products from the west coast,” Green said.

After raising $121 million in Series B funding last June, Upward will build its new facility in Pennsylvania this year, and hopes to start selling produce grown there in early 2023. The company also plans to expand to additional areas of the US in coming years.