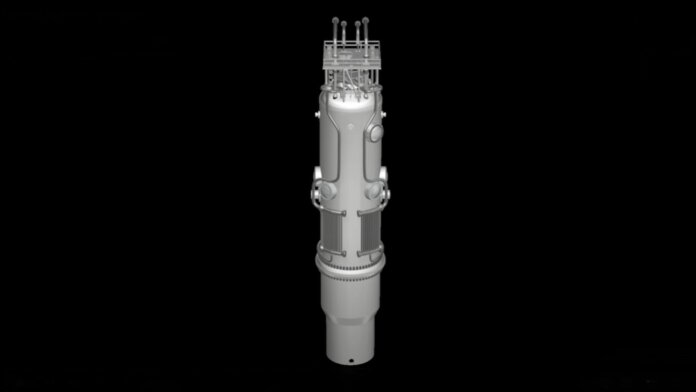 Nuclear power could play an important role in decarbonizing the energy sector, but reactors are simply too expensive and complicated to roll out quickly. A new, smaller reactor could soon change that after receiving certification from the Nuclear Regulatory Commission last week.

As countries around the world race to replace fossil fuel power plants, the debate around whether nuclear power should play a role has been heated. While the technology can provide large and reliable amounts of carbon-free electricity, cost and safety concerns have held back its deployment as a solution to the climate crisis.

In recent years though, a crop of new companies have emerged promising to sidestep many of these concerns by shrinking reactors down. So-called small modular reactors (SMRs) are designed to be small enough to build in a factory before being shipped to wherever they’re needed, which should significantly reduce costs. They are also designed to be much safer than existing reactors.

A reactor designed by Oregon-based energy company NuScale Power has become the first small modular reactor design approved for use in the US by the Nuclear Regulatory Commission (NRC), paving the way for new plants that utilize the reactor. The move wasn’t exactly a surprise, because the design passed its final safety evaluation back in 2020, but it is a crucial step towards actually deploying the technology in the field.

While some SMRs under development rely on exotic new designs that use molten uranium or thorium salts as a fuel, the NuScale reactor, which has been named VOYGR, is not dramatically different from traditional full-scale ones. It is based on a design developed at Oregon State University in the early 2000s called the “Multi-Application Small Light Water Reactor.”

The design consists of a 76-foot-tall, 15-foot-wide cylindrical containment vessel that houses the reactor. Water is passed over a series of uranium fuel rods that generate heat through fission reactions. The heated water then rises up towards steam generators, which use the heat from the water to produce superheated steam. This is then used to drive a turbine that generates electricity.

Each module is designed to generate 50 megawatts of energy, but the company plans to combine up to 12 SMRs to achieve similar outputs to conventional nuclear plants. The SMRs come with novel safety features designed to prevent the kind of disasters that have hardened public opinion against nuclear power.

For a start, control rods used to stop the fission reaction by encasing the fuel rods are held above the reactor’s core by an electric motor. This means that in the case of a power outage they will automatically drop into position under the force of gravity. The entire reactor is also bathed in a water pool, which can draw away excess heat in case of emergency. Also, by using smaller amounts of fuel, the total amount of heat produced is greatly reduced.

The hope is that these extra safety features—combined with reduced costs due to the ability to mass-manufacture these reactors in a factory rather than on-site—could lead to a renaissance in nuclear power. NuScale is working on a number of projects in the US, including one in Idaho that is scheduled to be completed by 2029.

But questions have been raised about whether SMRs will really live up to their billing as a cheaper, safer alternative to traditional nuclear power plants. A study published in Proceedings of the National Academy of Sciences in May found that contrary to the claims of SMR makers, these smaller reactors are actually likely to produce more radioactive waste than conventional plants.

In an article in Counterpunch, nuclear power expert M.V. Ramana also points out that the cost of renewable energy like wind and solar is already lower than that of nuclear, and continuing to fall rapidly. In contrast, nuclear power has actually become more expensive over the years.

SMRs could cost more than bigger nuclear plants, he adds, because they don’t have the same economy of scale. In theory this could be offset through mass manufacture, but only if companies receive orders in the hundreds. Tellingly, some utilities have already backed out of NuScale’s first project over cost concerns.

Perhaps even more importantly, notes Ramana, SMRs are unlikely to be ready in time to contribute to the climate fight. Projects aren’t expected to come online until the end of the decade, by which time the IPCC says we already need to have made drastic emissions reductions.

The technology has some powerful boosters though, not least President Joe Biden, who recently touted NuScale’s “groundbreaking American technology” while announcing a grant for an SMR plant the company will build in Romania. Engineering giant Rolls-Royce also recently announced a shortlist for the location of its future SMR factory, which will be used to build 16 SMRs for the UK government by 2050.

Whether SMRs can deliver on their promise remains to be seen, but given the scope of the climate challenge facing us, exploring all available options seems wise.