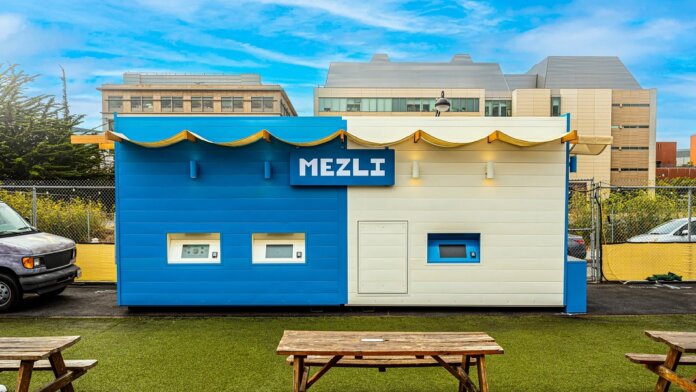 Even before labor shortages and supply chain issues began plaguing the economy, the food service industry was bringing in robots. From flipping burgers to making pizzas, automation has been taking over a variety of food preparation tasks. A San Francisco restaurant has now taken it to the next level, opening what it claims is the world’s first fully autonomous restaurant this past weekend (though the “world’s first” title is likely not accurate; Pazzi Pizzeria in Paris, for one, has been serving up robot-made pies for just over a year).

The restaurant is located in an outdoor food court in San Francisco’s Mission Bay neighborhood, alongside similar businesses. The similar businesses are namely food trucks, which is probably a more accurate label for Mezli than “restaurant,” except for the important detail that it’s not a truck. It is a lot like a shipping container in shape and size, though.

Here’s how it works. Customers place orders on a touch screen kiosk on the container’s side or from a smartphone app. Inside the container, which is refrigerated, robots select ingredients from bins of prepared items, transferring those that need to be cooked or heated to a smart oven. Once all the ingredients are ready to go, additional robots mix and box them. Completed orders are transferred to designated windows, where waiting customers pick them up on the other side.

True to its Mediterranean-ish name, Mezli serves “fresh, healthy Mediterranean bowls” that include options like falafel, roasted vegetables, spiced lamb or chicken, tzatziki, turmeric rice, hummus, etc. (I mean, you had me at falafel).

Mezli says it can whip up about 75 meals in an hour; probably not quite the scale of your neighborhood Chipotle or Roti, but getting there. The company was started by three graduate students from Stanford University, who started working on the concept in January 2021 at startup accelerator Y Combinator. During their first year of research and development, the team opened a pop-up restaurant, built a prototype robot, and got investors and a few new employees on board.

Focusing exclusively on the tech side of things wouldn’t get them very far once lunch time rolled around, though—in the end, food service comes down to one key question: does it taste good? So Mezli’s founders hired Bay Area fine dining chef Eric Minnich, a veteran of Michelin-starred establishments, to help perfect their recipes and menu.

To be fair, Mezli can only be called “fully automated” because the food served there is prepared by humans in a commercial kitchen then transferred to the robo-restaurant; machines aren’t cooking food so much as selecting and mixing it.

However, it’s automated enough to offer prices slightly lower than those of comparable competitors. The lowest-priced option is a roasted carrot and cauliflower bowl with red rice, hummus, and veggie garnishes, which goes for $6.99. The highest price point is $11.99, which is what you’ll pay for bowls that include chicken or lamb.

For the first few weeks of its operation, Mezli will have employees onsite to answer questions from customers and field any unexpected issues that may pop up. But eventually the restaurant will operate unsupervised, with customers’ only recourse after a botched meal to reach out to the company via phone or email.

Mezli had its grand opening on Sunday, and its founders’ ultimate goal is to scale their idea and mass-produce the robotic container restaurants; they have thus far raised about $3.5 million in seed funding from venture capitalists.

A food writer for The Spoon who sampled Mezli’s food said his falafel platter was “pretty good” and noted the generous portion size for the price. Alex Kolchinski, Mezli’s CEO and co-founder, said “People have generally been a combination of surprised and pleased” after trying the food.

However, there’s no guarantee Mezli will have more success getting off the ground (and staying there) than its robo-restaurant predecessors. As much as people like affordable food, maybe they also like that food to have a (more visible) human touch.

We’ll soon find out whether it really does come down to taste and price, as Mezli is likely one of the first in an imminent line of restaurants serving up dishes made by robots.